The Real Reason People are Fighting Over the Presidential Campaign. 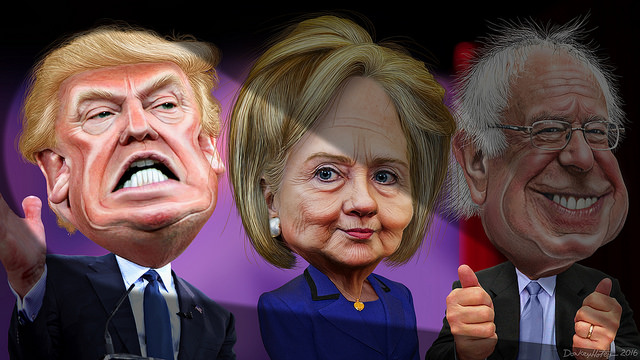 For those closely following the U.S. Presidential campaign it can seem as though all hell is breaking loose.

At some of the recent debates and rallies there have been reports of violence, aggression, discrimination, hatred, anger and most of us have seen something within our social media world by now that suggests that there is currently major unrest going on.

Many of us have developed a personal opinion on the ongoing dysfunctional and highly dramatic fall-out that America seems to be in the midst of.

Yet, there is one single thing that is causing it and something that everyone whose blood pressure has been raised, even slightly, is failing to acknowledge or fully comprehend.

Empathy is the art of seeing the world through the eyes of someone else by allowing ourselves to experience another person’s set of circumstances in our own being. It encompasses consideration for their motivations, attitudes, beliefs, values, feelings and emotions.

When we are judging anyone else’s thoughts, feelings, beliefs or actions and looking at their situation through our own eyes and mind, instead of through theirs, we are lacking that one precious and essential element that is vital for harmony and peace—empathy.

Whether we are the person screaming at the opposition and attacking protestors or whether we are quietly shaking our head in dumbfounded disbelief while reading through our newsfeed, we are condemning others and being judgmental and ultimately not engaging in empathy.

Unless someone is a psychopath, as studies have shown that empathy is one characteristic they lack, everyone has the ability to be empathetic. Yet, it seems so many people are not even thinking about the word or its meaning, let alone feeling it.

Part of the reason people feel and act unpleasantly is because they are afraid and whenever they feel fear it is because they do not fully understand something. With the ongoing campaign it is very clear to see that many people are afraid of what may happen if the candidate they support does not get elected.

Fear is one of the emotions that obscures reality and causes the greatest delusions and upsets. Whenever fear is present everything that we are going through is magnified and minuscule problems can feel like overwhelmingly powerful avalanches. Every policy the other candidate discusses will appear far worse when our thoughts about it are clouded with emotion.

When we are able to see that we all have totally different experiences and we are all individuals who think and feel very differently due to a variety of reasons, it then becomes more natural to be empathetic and potentially work towards resolving any differences of opinions and subsequent problems.

If there is any type of conflict going on due to people having diverse beliefs and opinions we can try to imagine how these things may be viewed from the other person’s perspective, as they may be struggling to understand our point of view or maybe tension has arisen due to a series of political or personal misunderstandings.

When we try to understand, even briefly, another person’s subtle or more obvious emotional, psychological or physical conditions and what gives them distress or pleasure, we can also be aware that their historic experiences and opportunities have in some way influenced their current, or past, general state of being and their decision making abilities and opinions.

If we are open and compassionate to the fact that everyone thinks and feels differently, we will not judge other people with contempt and instead try to simply understand them and express consideration.

We all have a unique set of experiences and social conditioning that no one else has access to and when we accept this we can work towards equality, peace and harmony rather than excluding, rejecting or denying someone just because we do not agree with them or understand them.

Separation always derives from an element of fear and that fear derives from the inability or unwillingness to understand other people through being open-minded and empathetic.

This whole concept can seem like an impossibility right now, but if the leaders that are either intentionally or unintentionally allowing this circus to unfold can acknowledge empathy, acceptance and a profound understanding for other people’s mindsets and circumstances, then maybe, just maybe we will all stand a chance of opening to this too.

Despite who might be standing on the stage encouraging supporters to follow their moral code, rules, regulations and virtues—none of the leaders have stood up and asked that we all regroup, think and then think again about the fact that each and every one of us thinks and feels very differently and that we are all entitled to our opinions, regardless of whether other people see them as fair, productive or harmful.

People come to conclusions for a variety of reasons, but mostly because whatever they are hearing resonates with them at a very deep inner level. Often people aren’t even consciously aware of why they relate to something so strongly, they just have a strong resonance with what they are hearing and they are magnetized towards aligning with it. I’m not saying that this is right or wrong—it is just an explanation as to why some people feel connected to certain things and wholly disconnected to others.

When we find ourselves confronted with someone else’s beliefs that are entirely different to our own, we can try to remember that getting frustrated or irritated or showing our disdain will not solve anything. As soon as we enter into a discussion or argument, thinking that we know better and that our opinions are the only valid ones, we are likely going to cause friction and gain a negative reaction. No one wants to be told that they aren’t entitled to their opinion or that someone else’s perception of a situation is the correct one.

Instead we can step back and focus on whatever it is that we are passionate about and we can then place all of our energy into creating positive change, however small, that is in line with our own beliefs.

When we fully understand and accept that everyone has different perspectives, (even if we are supporting the same candidate, our beliefs will still vary) maybe then we can look at exactly what each of these candidates are actually proposing rather than being carried away by our shock, dismay or fury due to their daily explosive headline catching antics.

If someone is attracted to aggression and conflict, they will be even more vocally supportive of candidates and parties embodying these qualities. And if anyone tries to deter them, without doubt, they will become even more determined to prove they are right by supporting whatever candidate it is that someone is telling them not to align with. Very few people will change their mind based on someone else telling them that they know better.

We will never know what information someone has read or what knowledge they have about a particular candidate that makes them offer their support, and mostly, what experiences they have had in their own life that makes them compelled to stand alongside them.

The only way we will ever regain peace is by appreciating and accepting that everyone is entitled to their own opinions and also understanding that these beliefs and opinions are due to an accumulation of many variables.