Clinton is Killing to Be President. 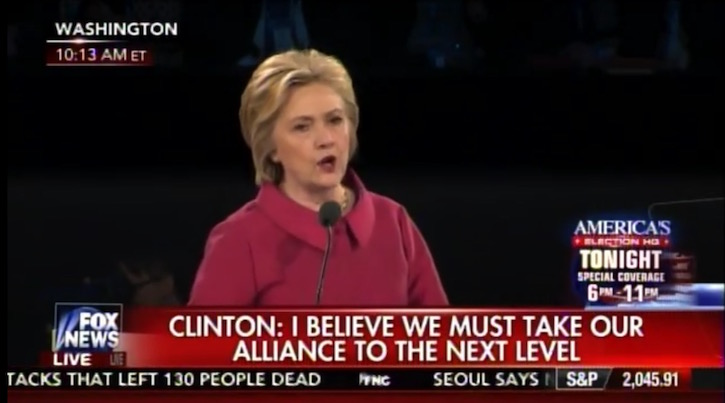 Clinton focused her gaze, jabbed her finger, and stiffened her spine for the America-Israel Public Affairs Committee, posturing outrage like a predatory schoolmarm in defense of apartheid and the last outpost of colonialism; meanwhile, on the other side of the country, an old Jewish man, in a high school auditorium spoke the unspeakable, that the siege must end, Israeli colonists withdraw from the West Bank, a Palestinian state be formed, and impartiality reign in America’s dealings in the Middle East. Armed with the slingshot of truth and a small army of volunteers, his words suggested that America might finally have found a David to take on every special-interest Goliath.

It would be easy to dismiss Clinton’s speech to AIPAC as a necessity of political survival. At least two major studies, the most noted from Fortune, describe AIPAC as America’s second most powerful lobby, and lobbies with that kind of power get what they want. Hence, it should surprise no one to see Clinton blame Palestinian victims of a half-century Israeli military occupation for the regional violence there. Books have been written on politicians ending their political careers saying a lot less than Sanders did about Israeli injustices. Former President Carter was savaged as an anti-Semite for comparing, along with the South African Nobel Laureate, Desmund Tutu, Israeli segregation to South African Apartheid.

But Clinton proffered an unusual level of obeisance to the lobby, and at a time in which criticism of Israel has become more acceptable. Tone is everything in politics, and Clinton’s tone was defiant and stern, like cut-steel sharpened for war. And it arguably had an immediate impact. A few days after her speech to AIPAC, a cabinet-level Israel official recommended carrying out a series of assassinations against Israeli activists and journalists who support the nonviolent Boycott, Divestment, and Sanctions movement. Clinton demonstrated herself to be ready to back Israel to the hilt in its next attack on Palestinians.

It would not be the first time Clinton showed herself ready to kill for the lobby.

Two of America’s most prominent foreign policy realists, John Mearsheimer and Stephen Walt, argue exhaustively, in their now classic book, The Israel Lobby and U.S. Foreign Policy, that key columnists and members of the Bush administration, strategically placed by the lobby, provided the ideological and administrative push that set America on the path to war with Iraq. Well-placed columnists, like Charles Krauthammer, William Kristol, and Robert Kagan provided the ideological justification, while the Bush administration’s two most ardent supporters of the war, Paul Wolfowitz and Douglas Feith, were so tied to Israel that at one time in each of their careers that they had been investigated for passing state-secrets to Israel. There is much talk now of the increasing support of these neo-conservatives for Clinton, but if these are the kind of foreign policy experts she attracts, we should be worried—very worried.

Americans often perceive themselves being at war with, not just this or that Muslim state, but with Islam itself. Israel and its supporters have gone a long way in creating this impression, providing both the ideological justification for a war with Islam as well as provoking it through their occupation of Palestine, which Bin Laden often noted was one of his three main reasons for launching the 9-11 attacks. Terrorism experts, like the author Peter Bergen, argue that among all the issues that pitted him against the U.S., he was most aggravated by support for Israeli abuses against Palestinians. It is a sentiment common to people the world over, who cannot understand why the U.S. would risk so much to support an abusive regime that gives so little in return.

Israel does nothing for America while often seeking to undermine American foreign policy goals, like the Iranian Nuclear Deal, which Israel’s Prime Minister had the audacity to lobby against in a speech to Congress. If America is to remain free from unnecessary foreign entanglements, it is essential that the President be free from the influence of such a provocative lobby. But Clinton has gone against the wishes of much of the Democratic base in tying herself ever-more tightly to the lobby than previous Presidents, and this is dangerous.

Few doubt the integrity of Bernie Sanders, but just as few seem to have grasped its significance. Integrity is essential to leadership because it allows leaders to remain true to what matters most, and it gives them the strength to make the right choices, because it frees their thinking from the extraneous noise of fear. It is difficult to comprehend an issue in its wholeness if looking at it from certain angels is taboo. Leaders need to feel free to let the truth lead them where it may if they are to accurately diagnose social-ills. And this is just what Sanders is doing in addressing America’s most systemic ailments of inequality and money-in-politics.

What few seem to have noticed is that Sanders’ courage also helps him to craft better foreign policy. Sanders is often seen as a foreign policy novice, with a skeletal advisory crew and few new ideas. But it takes integrity to transform American foreign policy, because crafting a foreign policy in America’s interest and that of the world can be dangerous for a Presidential candidate, especially when it means challenging the Israel lobby. It will be much the same with the oil lobby and the military-industrial complex.

In breaking the taboo of challenging the Israel lobby directly, Sanders has taken a major step-forward in crafting a foreign policy more in accord with both American and global interests. And he has made it easier for other American leaders to do the same.  In its support for corrupt regimes in Egypt and Saudi Arabia, its war of choice in Iraq, and its defense of Israeli apartheid, America is more often than not seen as a regional nuisance. And this makes it difficult to bring the world together on every other global challenge. Foreign policy analysts have often pointed this out, noting that American interests are more threatened in Southeast Asia, while environmentalists have pushed for a greater focus on global challenges like climate change.

But these goals are difficult to accomplish when fighting a Manichean war with Islam. Being free of this fight does not always mean Sanders will do the right thing; foreign policy decisions often involve complex moral trade-offs, like that between standing by and watching hundreds of thousands die in Syria or else intervening, when the motives of  those you might pull together to intervene are far from pure. But these are moral trade-offs. Clinton appears to be fighting for an interest group that puts Israeli policy above American interests, and often defines those interests in racist ways. This signals she will not only perpetuate the war with Islam but intensify it. And she will do so against the interests of her party and, apparently, in favor of her own career advancement. That is a problem that should worry every Democrat and every American.

If you liked this article, please check out my book, Convergence: The Globalization of Mind.