In Love With Jekyll & Hyde. 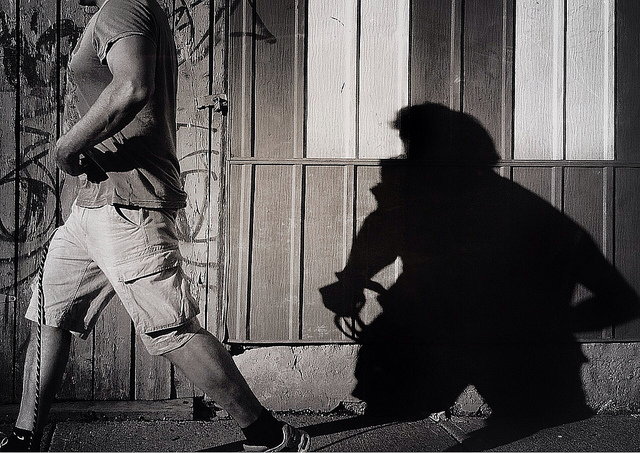 I was once chaotically in love with the tender beauty of the seductively sweet and sensitive Jekyll. And at the same time, I gave my all to the treacherous, callous and wicked tyrant that I came to know as Hyde.

He was a wonder to take in, a whirlwind of darkness and light that very nearly consumed me. I was fascinated, intrigued, captivated and mesmerized by the way he would morph into someone new before my eyelashes had a chance to close.

If I had told anyone about Hyde, the dangerously cruel shadow side of this yin and yang man, they would never have believed me. Never understand. And I wouldn’t have believed anyone else telling this tale, if I hadn’t lived all the way through it.

The others only ever witnessed Jekyll. Oh yes, Jekyll with his delicately sweet lips and eyes that reflected moon dust, magic and magnificence. Hyde was reserved only for me. So, I naively and foolishly felt special. He saved his passionate fury and anger and hid it far from other people’s sight.

I now know why. Of course, this private performance was not a privilege. I was simply drugged with what I thought was love, so I believed that the highs and the lows of his roller-coaster emotions meant that I meant something to him. To the man with the closed hardened barbed-wire bound heart.

I was magnetized to his hidden secrets and the dark desires emanating from one who had thunderous storms wildly raging just below the layers of his glistening skin.

I picked up every shattered piece of him that I could find and tried to safely glue them back together. But I was wrong. So heart-wrenchingly mistaken.

You see, what I failed to understand is that Hyde wasn’t broken. He was perfectly half-and-half of a whole. He was happy and contented, encapsulated in this nightmarish dream that I had freely walked into. He was alive. He inhaled my fear and turned himself to Jekyll, and my love turned him back into Hyde. A mixed up, muddled up mess.

There was no balance, no harmony and no peace. No, he wanted conflict, friction and a war that was reminiscent of Moriarty and Sherlock’s impossible to master games. “Till death” was his game. One of us was surely going to lose our mind eventually. It was but a game to him. Pushing, testing, shoving at times to force me to accept every aspect of a man that would force me into the tides of his living hell—and I willingly let him.

I wasn’t prepared for a man such as this. The twisting, the turning, the constant switching of sides. He spun me around, pulled me in and would take pleasure in throwing me out to the piranhas. Oh, the delight that would light up his eyes while watching me writhe in agonizing pain.

I cried, but in awe, at the devastation surrounding me, as I watched him perform his enchanting dance. He was always ahead, floating high above me like an enchanting butterfly aware that it was experiencing its very last day.

When we touched , his insides were frozen. I shivered with fear  knowing I was spellbound and that he was pulling me into a bewitching, poisonous charm, carefully laced with an intoxicating golden glow, to draw me near.

His voice echoed the roar of angelic demons. His body crafted from the blueprint of mythical gods cast out by fierce, forsaken ghastly skies.

I tried to step back. He was hot on the outside, stone cold beneath; I was charred by the flame, stunned by his chill, utterly lost and spun out within the darkness.

This was a mixture of a man.

Although he is gone—buried alive in my mind, silently gathering dust—he returns to haunt me. To taunt me. Smiling at all the destruction and damage he caused.

I welcome this visiting fallen star. Burning on the outside, brilliant light on the inside that blinds me so that I lose my way. But he is lost too, cascading through the night at devastating, dangerous speeds.

He is tortuously wrapped in an unraveling maddening turmoil.

The man isn’t crazy though. No, Jekyll made promises that he assures me he intended to keep. It was always Hyde that broke them. How can I stay angry with a man that wasn’t one man?

When you love someone splintered and invincible, you have to be prepared for the damage that is caused when those shreds and shards tear into your heart and pull it apart. And to know that you can never change them. You cannot simply love harder to make them whole, or break yourself too to make it all seem okay.

I try to forget him. Empty my heart of every nostalgic remnant. But the man is a raging furnace.

Fires like him cannot just be unseen. The flames have extinguished but now his embers remain. Despite my suffering he rises.

Petrified and paralysed I curse myself.

It’s okay though. I will forget him tomorrow. Please, just give me this one last day.

Although, truthfully, I know there will be no end.

He is a mirror.

Carelessly reflecting all the unknown, forgotten parts of my soul.