A Canadian comes to the U.S. & learns the secret to Trump’s Success. 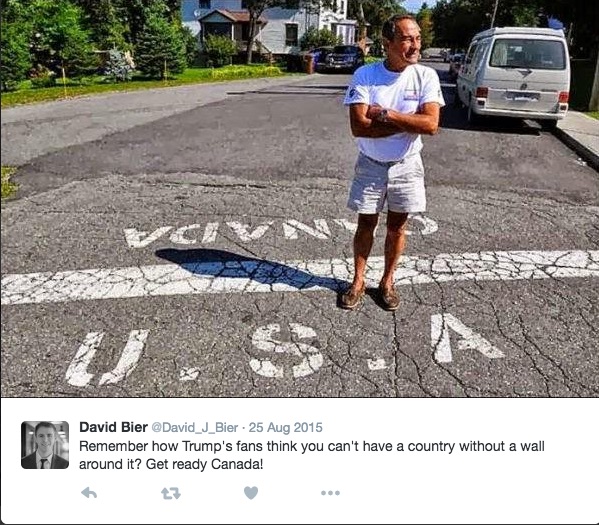 I’m a Canadian, born and bred. We don’t like to meddle in politics too much. We like to elect our politicians quickly, fairly quietly and then hear nothing about what they are doing for the rest of their term.

On the other side of the border, however, the Trump debate has not been a quiet one.

Canadians seem to have a lot to say about it. Mostly, we ponder how a man like Trump could ever become so popular—how could he now be a presidential candidate, and why would a country allow this to occur?

Well, from my humble position, living on an island just up from the Washington border, there are good reasons.

Recently my partner and I went on vacation to the U.S. He was awarded a trip to Lake Tahoe through work and took me with him. I was excited to head to the wilderness there, to hike and to breathe the fresh air. I was also tapping my heels with anticipation to speak to real, live Americans about the Trump campaign—I wanted a little inside information.

I was hoping to glean a better understanding of what was happening in the U.S. and why. However, I quickly discovered that Trump discussions were kind of taboo.

The first time I asked about Trump on this trip, I was white water rafting down the Truckee River. The American passengers and I had bonded all morning over conversations about nature, adventure and family, so it seemed a good time to query.

“I’m wondering…what do you guys think about this Trump thing and why he’s so popular?”

Pause…Stares in the opposite direction.

Finally my paddling partner took a deep breath and looked at me. Her previously friendly smile turned neutral.

“Sorry, but, you know…it makes me pretty uncomfortable to talk about.”

“Oh, sorry, I didn’t. My apologies. You mean Trump? Or why he has done so well?”

Silence. No one on the boat said a word. Then my paddling partner looked at me again and said,

“It’s just really hard to talk about. It makes me sick, and angry and afraid.”

“Is that what Trump is working with?”

I asked, wanting to honor her feelings but desiring more.

Her body softened slightly with another pause,

“I think Americans are afraid. I think the country is divided and just wants something better. Not necessarily Trump. But, a change, a drastic one to heal all this—“

She made a sweeping motion with her free hand.

I encouraged her wordlessly.

“It sickens me to think of him becoming president. What hurts more is the paranoia that we’re living in. It’s like everyone is so afraid of America failing—falling down—that this drastic man, as ridiculous as he is, is what many cling to.”

Then she fell silent.

I replied, and then changed the subject to the rare bird I noticed on the river bend up ahead.

Well, that was my first Trump discussion with an outdoors enthusiast living in Bend, Oregon. She didn’t say much for the rest of our trip down that river. I understood, I think. She was afraid; the whole boat was intently listening.

That night was the gala dinner for the awards trip, and I was seated at a table full of Americans. I was having lovely conversations. We were sharing light spiritual and relationship banter, and I felt that, even though this was corporate America, I sort of fit in.

So, I decided I would give the Trump question another go.

“How are you guys feeling about Trump? Does it scare you, or could it be a good thing?”

A table of 20—bosses, and bosses of bosses—were suddenly completely silent. The friendly exec next to me smiled. I blushed and said,

“Geez, I guess I know how to silence a room.”

I chuckled, trying to make light of what was obviously an uncomfortable topic.

Then, the woman who smiled spoke up, giving a little laugh first.

“I think we are uncomfortable talking about this. Most of us are just as confused as you guys about how this could happen.”

And the conversation was closed…

Until two nights later around a campfire, where we met a serious Trump supporter. I asked him the same question:

“So what do you think about Trump?”

No pause, not even a second or a breath.

“I think Trump is great,” he said, “I think he is what is going to save America. He’s just what we need to shake things up. We need a strong leader who won’t take sh*t from anyone. He’s our man!”

This time, I was silent. I paused. Took a deep breath in.

“What is it about him that you like?” I asked.

“He says what he thinks. He calls a spade a spade and he knows how to get things done. He’s a winner.”

And, that was that.

The first woman I talked to spoke of the divide in America and of fear. The second time I brought it up, I was met with silence and received the answer that there was confusion amongst Americans. The third time, I was given a thumbs up, because Trump was going to save America.

I kept hearing the words in my head: “fear,” “divide,” “confusion” and “saved.” It sounded like something different than a political election. Rather, it sounded like a call to healing.

When the American dream was promised many years ago, many bought into it, ate it right up. It became possible to make a great man out of anyone, if they just worked hard. But many could not achieve that result.

Trump has grabbed hold of the ideology of the American Dream—boasting of his success and riches—even though we often forget he was rich to begin with. He has now promised to bring back the American dream again—to make the U.S. great.

But, he has also succeeded in bringing fear.

His success has stoked fear in his opposition. Confusion too, enough to silence many. And he has fed the fear in his supporters, too, so they believe they need him.

If you convince people to feel disempowered, they are easier to manipulate. It seems Trump has done this. He has told Americans their country has failed them. He has convinced them they need a radical savior.

With the spotlight continually on such a powerful man who regularly pokes at our fears, how can we not be swallowed by them—and him?

I don’t know the answers to this. I’m just a humble Canadian. But I do know that every American I talked to was afraid.

I wonder what it would take in this presidential election to move away from fear. How would we get there?

It seems there is a call to healing in America, one I believe is based in the joining of two words my American paddle partner used: “heal” the “divide.”