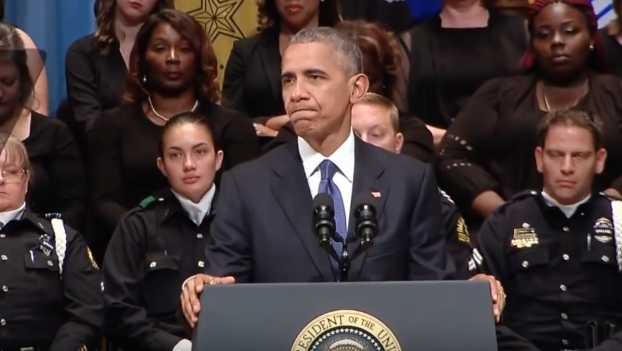 “An open heart is the dwelling place of compassion that extends towards all beings.” ~ Venerable Thubten Chodron

As I watched President Obama in Dallas on Tuesday standing before a mournful audience at the memorial for the five murdered police officers, I wondered what words of comfort—what succor—he would offer.

This is the 11th time in his presidency that he has had to offer presidential words of support to the mourning families and friends of Americans lost to gun violence. And frankly, he looked weary. He even said himself, “I’ve hugged too many families who have lost a loved one to senseless violence.”

He chided a society that systematically allows poverty and lack of a good education and opportunity to fester in certain communities—and then expect the police to act as social workers, teachers, parents and drug counselors.

Throughout his speech he made spiritual references, quoting biblical verse, as one might expect in a Bible belt state like Texas. “The Lord tells Ezekiel: I will give you a new heart, the Lord says, and put a new spirit in you. I will remove from you, your heart of stone and give you a heart of flesh,” he quoted.

His speech took a decidedly Buddhist turn when he asked the question, “Can we find the character as Americans to open our hearts to each other?” And for the rest of the speech, the theme of an open heart permeated his words.

One of the qualities of the Buddha nature, as explained by Tsoknyi Rinpoche, is “immeasurable loving-kindness and compassion.“ A core teaching of Buddhism, he says, is that “we all possess this nature.”

The President went on to say:

“Because with an open heart, we can learn to stand in each other’s shoes and look at the world through each other’s eyes, so that maybe the police officer sees his own son in that teenager with a hoodie who’s kind of goofing off but not dangerous—and the teenager—maybe the teenager will see in the police officer the same words and values and authority of his parents.”

In her book Broken Open: How Difficult Times Can Help Us Grow, Elizabeth Lesser says, “A broken heart is not the same thing as sadness. Sadness occurs when the heart is stone cold and lifeless. On the contrary, there is an unbelievable amount of vitality in a broken heart.” In other words, a broken heart is an open heart.

Hearts have been broken by the events that took place in our country between July 5th and July 7th. The families and friends of Alton Sterling and Philando Castile have had their hearts broken by the cops who killed them. The families of Lorne Ahrens, Michael Krol, Michael Smith, Patrick Zamarippa, and Brent Thompson have had their hearts broken by a gunman who killed them.

The nation has had its collective heart broken by divisiveness that has gripped our collective psyche in the last few years.

The president said, “That’s what we must pray for, each of us: a new heart. Not a heart of stone, but a heart open to the fears and hopes and challenges of our fellow citizens.”

For the remainder of his speech, President Obama extolled the nation with the virtues of opening our hearts to each other.

“With an open heart, we can abandon the overheated rhetoric and the oversimplification that reduces whole categories of our fellow Americans not just to opponents, but to enemies.

With an open heart, those protesting for change will guard against reckless language going forward, look at the model set by the five officers we mourn today, acknowledge the progress brought about by the sincere efforts of police departments like this one in Dallas, and embark on the hard but necessary work of negotiation, the pursuit of reconciliation.

With an open heart, police departments will acknowledge that, just like the rest of us, they are not perfect; that insisting we do better to root out racial bias is not an attack on cops, but an effort to live up to our highest ideals.

With an open heart, we can worry less about which side has been wronged, and worry more about joining sides to do right.”

In an article I wrote recently, I talked about the loving-kindness meditation that I do when ugliness and strife seem to overwhelm me. “May I be well. May I be happy. May my heart be open and filled with loving-kindness. May I enjoy true peace in this life.” I felt my heart open wide as I listened to the President’s speech. I pray that the hearts of others were opened as well.

You can read the full text of the President’s speech here.