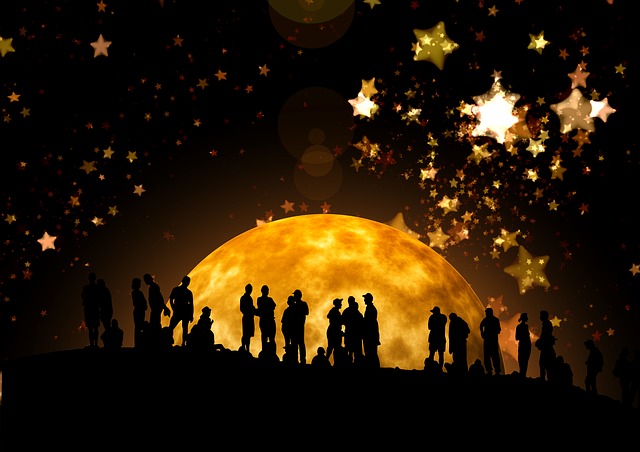 “Try not to resist the changes that come your way. Instead let life live through you. And do not worry that your life is turning upside down. How do you know that the side you are used to is better than the one to come?” ~ Rumi

On Thursday, August 18th, there will be a Full Moon and partial lunar eclipse in the sign of Aquarius.

This occurs opposite the sun in Leo which is the combination of fire and air—representing our heart and courage.

We aren’t meant to rush into this Full Moon, but rather to slowly accept that this time things are different.

Now is not a time to get scared off but it might be the perfect time to become the alchemist of our own destiny.

During this past year, we’ve become easily preoccupied by all of the shiny and sparkly aspects in our lives. They have distracted us from our true journey—it was comfortable to only go skin deep.

Before, I was comfortable to go skin deep, but all of that is changing now.

None of this will occur without chaos though, thanks to Uranus and Pluto being on the scene.

Yet these things won’t be done with destruction, but a harsh new reality that hits us in the face. There are times when we aren’t ready for the truth, when it’s easier to believe what we see rather than what we feel.

Regardless of those times, we are entering into a time when nothing will do but the truth.

Leo’s beautifully courageous energy will wash us giving us the gusto to express what it is that truly is beating within our soul. The thing is, no matter how far we run from the truth, we can never really escape it.

We may still feel fear what we are thinking, feeling and waking up to. These feelings are not debilitating, rather just flutters of wonder that remind us that what we are about to do really matters to us.

During this Full Moon we also have a Penumbral (or partial) Lunar Eclipse. We won’t really see the effects of this from Earth, but our bodies will still feel the effects of it.

Each Full Moon, we are our choices. It’s a chance to let go of situations or people that we have outgrown. We also are under a greater amount of lunar energy which may bring to light any lingering issues or truths that we have previously ignored—when there is an eclipse involved, all of this is magnified.

During an Penumbral eclipse the Earth moves between the sun and the moon and blocks some of the sun’s light from reaching the moon. This creates a shadow around the outside line of the moon, or penumbra. The moon still appears full.

Be prepared for some big realizations around this Full Moon.

This isn’t the ignorance of self but rather situations where we really had no idea what was going on until we decided to venture inside, without needing our fear to keep us company.

Think of it as entering a darkened house and suddenly turning on the light and realizing you are somewhere much better than you thought you’d be.

Aquarius moves like the wind and seems to be everywhere—it calls to us when we least expect it and during this Full Moon it is this sign that will begin to usher in the winds of change.

We’ve felt it brewing for a while now, and while we are always in control of our own destiny, sometimes the stars align to assist us on our journey.

And regardless of what obstacles occur on our journey we are being lead toward exactly where we are meant to be.

Regardless of the epiphanies that occur during this lunation, it’s only the beginning for many of us. While this is a partial lunar eclipse, next month we will have a full lunar and solar eclipse—so just in case there is anything you’re trying to pretend isn’t over, it will be impossible to ignore the next few weeks.

We are done fighting for a life that we thought we needed, because now we are ready to sit back and enjoy the life that we are meant to lead.

Sometimes we just need to take the long road to get there, yet it doesn’t matter when we arrive, but only that we do.

Right now is right on time.

Make a Life List. It’s not a Vision Board. Here’s a photo of Mine.