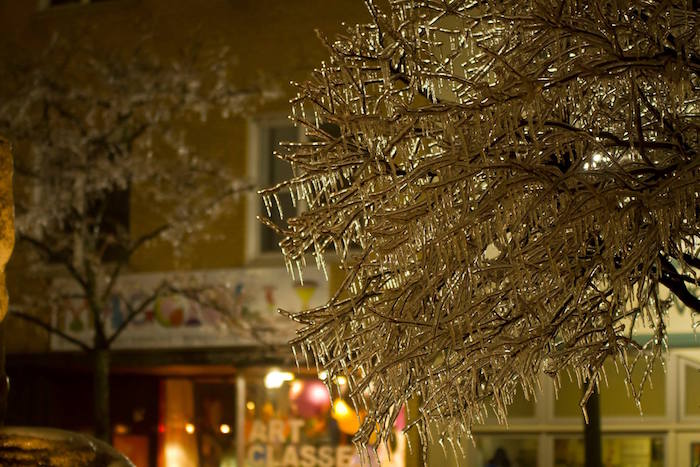 Up here in Orangeville, Ontario, Canada we were feeling pretty pleased with ourselves for having had an “easy” winter—I say “easy” because the temperatures were fairly mild—if you count -15 Celsius as mild—and there had not been a lot of snow.

A couple of times over the course of the season, I had remarked to neighbours, “This is too easy, we’re going to get it in March.” My senses told me not to trust a relaxed, lovely winter. I had the feeling that we were going to experience a storm, and that would really give us all something to talk about.

At the end of March came a massive storm that got me thinking seriously about—well, everything. On March 24, 2016, over the course of 12 hours or so, it rained ice, then rain, then came more ice. It was just cold enough that the ice stuck to and coated everything. People who lived in rural areas had no hydro for up to 96 hours. In the first hours after the ice rain stopped, the roads were un-passable and the sidewalks were skating rinks.

Trees were encased in a layer of ice as thick as my thumb.

It was too much for them to bear.

The ice brought destruction, and some lessons.

The night of the storm I lay in bed watching the lights flicker, and listening to the tree branches crack off their trunks and fall to the ground. Smashing amidst the ice and water, the sound was creepy and unnatural, so many pops and splinters happening so quickly. I worried that my bed in the third story loft of this old century home was a little too close to the roof for comfort. I had this strange feeling I had been in this place before, something felt familiar. Maybe not in this exact bed, or in this exact storm, but in a tempest that was recognizable as it raged through my life, and my heart, destroying anything that was standing as it moved. It is true that our bodies often remember what our brains can be slow to catch up on.

Our bodies recognize when trauma is happening, as mine did in bed that night.

I felt coiled tight, waiting for a big branch to fall on my house. Worrying that not one tree would be left out there standing when I peeled my eyes open in the morning. It’s similar to when we live in chaos, and we are just waiting for the next blow to befall us. The chaos has been over in my life for a while now, the depression and anxiety roaring only dully in the back ground. Nonetheless, my body proved to me it remembered what it was like to live with it raging full force as the ice made its mark on my neighbourhood.

The next morning, the trees were still standing but everything was covered in ice, the branches laid to waste on the ground, a million shards of wood, and a hundred naked wounds. It looked and felt dramatic, and sad, and there was nothing we could do. Nature ebbs and flows, with beauty and destruction, and we are just passengers on this ride. Sometimes it makes us feel small, like we are at its mercy, and sometimes it makes us feel as big as they sky, that we are able to witness all of this. Looking at all the brokenness as I skidded and slipped along a dangerous sidewalk I felt tired, and helpless.

The storm was over, and the sun was peeking out, and it was clear to me the trees were sobbing tears of sap from their open places, no longer covered in thick protective bark. Collectively the humans around me peered out their windows and shook their heads a little mournfully—what a mess.

In the afternoon the sun came out, and the trees, sidewalks, cars, grass, and bird feeders shimmered like a glass, and there were stars in the daytime. We saw this all for exactly what it was, a big, glorious mess. The thought came to my mind, “How can something be so beautiful and so broken, all at the same time?” I knew the answer, I just had to pause and look at myself, and all the other humans around me: here we are, a big, beautiful, glorious mess.

So we did what humans do, both after a storm in nature and a storm in our souls, we started to clean it up. Chainsaws and chipper machines could be heard reverberating on the streets, and slowly all the branches became piles on the edge of the road. Some piles were so tall they came up to my nose. All this brokenness, organized into a heap to be picked up by a truck and taken away. I looked up in the twilight to see the branches that had broken but got tangled, and are hanging precariously, waiting for the next gust of wind to knock them down. A reminder that we can’t always clean everything up, some bits hang on to tell us that our work is not done yet. There will always be a ways to go.

When we emerge from stormy situations we may be in pieces, and it is part of the work we do as individuals, and as communities to put these pieces in a bit of order again. It’s part of the grace of being human.

As I walked around the neighborhood for a few days after the storms the air was drenched in the smell of freshly cut wood. The sharp almost citrus smell of smashed cedar, and the tangy warm smell of maple sap. Smells are a memory, and the memory of the trees lingered in the air for a while, before floating off into space. I noticed that not one tree was ripped up by its roots, or slashed down the center of its firm trunk. The bases of all the trees still stand, as they have been standing for 100 years, and will continue to stand for a few more. The tops are a little worse for wear, and the hydro crews had to do some creative pruning to get the electricity back on, but in a few weeks when they are covered in a green haze of buds, we won’t be able to notice at all.

I breathed in one last gulp of tree smell, and it reminded me of my dad—a landscaper, and gardener, he always smells like trees, soil, wind and sweat.

It reminds me of cutting countless cedar branches with him, or unraveling the twine around a gigantic ball of burlap and roots, to bring a tree home to its resting place in a hole we dug with our own hands. This is calming. In the calm after the storm I can look around me and take stock of all the things it had to teach me. After a crisis has cleared away, the gift is learning from it. I know that despite the carnage in the branches, there is still life in these trees, and there are still people out there planting even more.

I know that being broken doesn’t mean it’s over, it means you had something unnecessary removed from you.

I know that ice comes and goes, and so does spring. I know that sometimes it is important to pile up the brokenness on the side of the streets, and let it be taken away.

I know that hope will arrive in the color green.

I know that nature teaches us exactly what we need to learn, and when we do learn it, our hearts and minds can be the size of the sky. 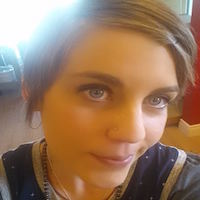