Meditations on Tolerance in Islam. 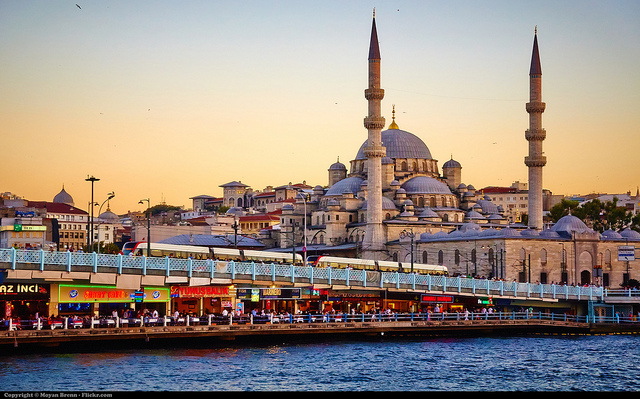 The call to prayer reverberates through the thick Istanbul air.

The voices of muezzins from several mosques roll through in waves, haunting melodies of spiritual remembrance, wafting silkily through the quiet evening clouds.

I watch from my hotel balcony as ships pass along the Bosporus, rusting Russian hulks making their way to the sea. The Turkish Nobel Laureate, Orhan Pamuk, writes that this watching of the waters is a long-standing tradition. Surrounded by the relics of the past, heirs to a greatness that has long been swept aside, Turks are often anxious purveyors of a future that seems never to arrive.

Istanbul stands between the Middle East and West, Europe and Asia, Black Sea and Mediterranean and its residents constantly speak to me of their tolerance. While people in the West tend to think of Islam as an intolerant religion, it is the only one of the three Abrahamic faiths that is explicit in its respect for the other traditions, whose prophets it embraces as its own.

But here in Istanbul, where conversations in English are most likely to occur with Kurdish restaurant owners and carpet sellers, people speak with pride of their respect for other traditions. Liberal Muslims tend to be explicit about their uncompromising respect for other spiritual traditions, so much so that it sometimes seems the principle debate in Islam is not so much between church and state, or mysticism and orthodoxy, but rather tolerance and intolerance.

This is my fifth visit to this ancient city, and it has swollen in numbers since my first visit 25 years ago. But the shops and restaurants in the main tourist center of Sultanahmet are now empty. A series of Isis terrorist attacks, a coup and a government crackdown, have left travelers wary. It is an all-too-typical story in the Middle East today, where generations of corrupt secular leaders, backed by Western powers, have contributed to a rebellion from modernity itself.

Lacking in the most basic political rights, citizens in places as varied as Egypt, Turkey, and Iraq have turned to Islamic groups, which have provided a social safety net and helped organize them politically. But it is a devil’s bargain that can be witnessed in Turkey today, where a mildly Islamic government that once held much promise is slowly eroding democratic rights.

When the Justice and Development Party first took power, they focused on development and removing the military from civilian affairs. But since that time, they have broken the power of elected city councils, jailed over 2,000 journalists, and following the recent coup attempt, black-listed at least 60,000 members of a rival, more moderate and ecumenical Islamic faction. The result has been a plummeting of European tourism, and in their absence travelers have streamed in from the Gulf countries. And the burkas are abundant, with women clad from head-to-toe in black. 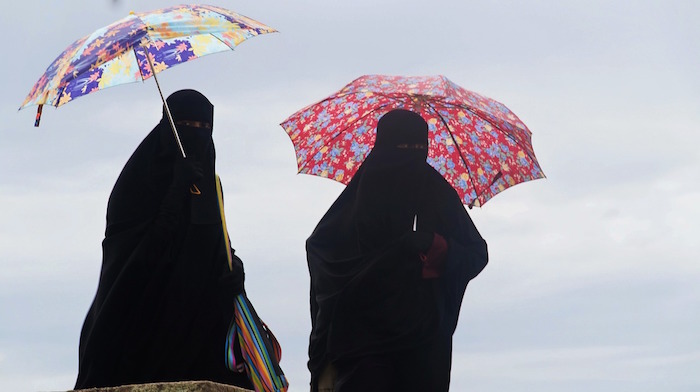 The hijab, or headscarf, is often colorful and tends to bring out the radiance of the eyes and smile, softening the appearance, and lending to the self an ephemeral sense of spiritual beauty. But the burka makes women into mute black boxes. The woman whose face and body are covered in black expresses no personality, hints at no political opinions, demonstrates no will of her own.

The few women I have spoken with in depth about their experiences living in Saudi Arabia say life is actually quite good there and that they run their homes, attend college in higher numbers than men, and occupy themselves by sitting on non-profit boards, which tend to be run by women. Perhaps this is true, perhaps it is a corrective to caricatures of their oppression. But whether adopted by choice or imposed by state, whether covering Saudi tourists or taken up by the more moderate Turks, the burkas on display here are bluntly dehumanizing and leave me worried.

Turkey has carried out a centuries long dance with the West, moving forward and distancing itself to the pulse of Western intolerance. Whereas Islam enjoins respect for the great world religions, “the Peoples of the Book,” even liberal intellectuals tend to espouse a crude mix of idiocy and prejudice when speaking of Islam, indulging in stereotypes and often ignoring the most basic tenets of the religion.

Liberalism is its own creed, after all, and those who go against it can suffer the same sort of ostracism meted out by fundamentalists toward the irreligious. Since it is hard for the members of poorer and more traditional cultures to live up to Western standards of individualism, countries like Turkey often turn inward and away from the world, and the regressive practices proliferate.

Travelling to a place like Istanbul does not tend to teach much, though. For the tourist center, while bearing the relics of Byzantine and Ottoman greatness, can sometimes seem a caricature of itself. Istanbul has long served as a center of orientalist delights, and its sheer exoticism is at one and the same time aesthetically magical and culturally worrisome.

Much as Isis mirrors Western fears of Islam, the older core of Istanbul mirrors Western fantasies of the oriental other. Both are genuine cultural expressions, but in much the same way as Disneyland is a cultural expression of America. These are plays on themes and it takes careful interpretation to read into the ever elusive essence from which these themes have emerged. In the absence of this interpretation, Muslims are often further repelled by a liberal order in which they seemingly have little place.

Travelling helps get the proportions right, but it tends to be overrated, often obscuring as much as it reveals. It is common to hear people in Turkey say that the real Turkey is to be found in the heartland, but this may be a myth propagated by Kurdish shop owners whose villages lie in the east. Istanbul seems to me to hold more of the Turkish enigma, more of its self-conscious contradictions, more of its insecure pride.

A Kurdish carpet seller tells me it is so complex that he spent his first 10 years there lying awake at night trying to figure it out. But however much this picturesque scene of decrepit houses interspersed with scattered ruins, and woven together by the echoes of prayer and the wide Bosporus channel, is but a culture playing on itself, like so many goods in a market stall, displayed for purchase and self-consciously arranged to depict more some idea of culture than some lived reality, the city is aflame and strikingly gorgeous in its many varied convulsions. Perhaps it is from this space of admiration and wonder that we should begin our discussions of coup and counter-coup.

Perhaps it is from this place of appreciation that we should begin to criticize another culture.