The Wisdom of Inadequacy. 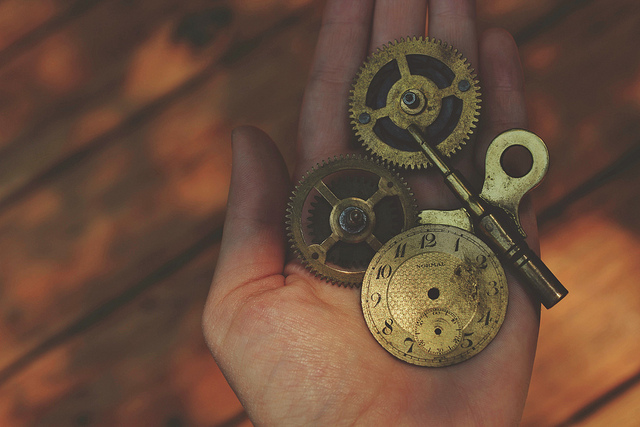 Everyone has thoughts like this from time to time. Everyone experiences the emotions of shame, inadequacy, guilt and remorse.

The pop psychology/New Age/spirituality world has given these thoughts and feelings an unequivocally bad rap. They are thought of as toxic, limited—something to be cleansed from our system as quickly as possible, through one of the many kinds of psychic enema available today (for a fee).

Of course, previous generations adhering to Catholicism, Puritanism and Judaism went overboard on these feelings. They became pervasive, a form of self-flagellation without any break. But I am going to suggest to you here today that we might—just maybe…some of us—have thrown the baby out with the bathwater.

The book I am working on now is about brilliance. It explores how and why some people have original, life-changing ideas, and indeed why many of us just go on repeating regurgitated thoughts that we have heard somewhere before. I have been teaching people to foster brilliance for close to 25 years, and I guess I have learned a thing or two along the way.

I see the four phases of brilliance as something like the face of a clock. 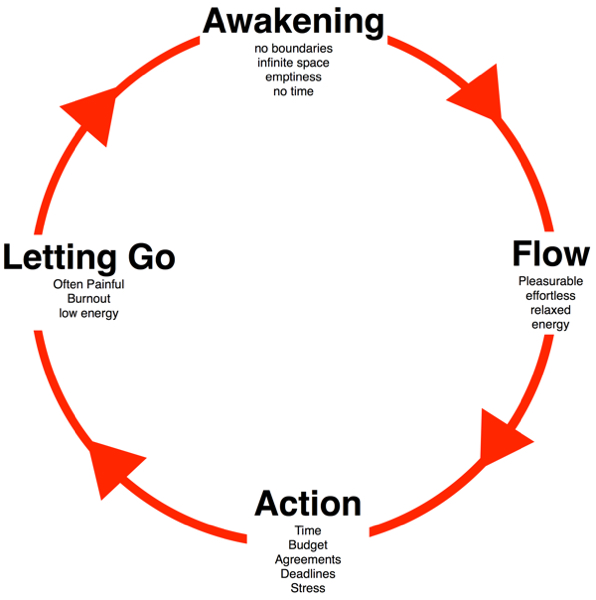 At 12 o’clock is infinite mind, resting in our true nature, becoming familiar with the source of thought. Three o’clock is the place of creative flow where impulses are flowing through us in a way that is effortless and full of energy. Six o’clock is the place of action. It is where creativity gets channeled into deadlines, agreements, budgets, responsibility and, most of all, decisions. As soon as we commit ourself to creating something solid and tangible in the world, we put both feet into the realm of “doing.” Nine o’clock is the phase of letting go, dissolving back into the source of which we are made and out of which we arose, like a wave collapsing back into the ocean. Nine o’clock is the phase of facing our inadequacy as a separated entity.

One of my favorite books in my whole life is Steps to an Ecology of Mind by Gregory Bateson. Bateson was arguably one of the greatest minds of the 20th century. He coined the term “double bind,” which explains how human beings grow and evolve through facing seemingly impossible choices. Hamlet faced a moment like that. So did Arjuna in the Bhagavad Gita. And, in fact, so have most great heroes and heroines in literature.

The thing about a “double bind” like this is that whichever choice you make, there is some feeling of regret, a feeling that you did the wrong thing. We try to deal with this kind of dichotomy by “learning from our mistakes,” as though by paying close enough attention to the sequence of steps we went through, we will be able to avoid the painful split of the double bind next time around. But what if, as Bateson suggests, double bind is intrinsic to getting involved in life, to growing and evolving? What if, as Leonard Cohen once said, “We think the purpose of our life is to succeed at our given mission, but later we discover that the point was to fail, but not take it personally?”

Nine o’clock in the Brilliance Cycle is the place of failure and collapse. It is the place that no one wants to go; it is also the place that pop psychology offers a million and one formulas to avoid. I want to suggest to you that utter and complete failure and collapse—the feeling of giving up, of being nothing and nobody—is actually an incredibly healthy part of the cycle of brilliance, and of being a truly integrated human being.

When we have these feelings, instead of “pepping ourselves up” with alcohol or fast company or self-help books, we can instead dive deeply and temporarily into the despair. Allow the story of inadequacy to become real…for a while. Fall apart and give up.

We will open to the inevitable truth that our small human existence is more or less completely ephemeral and irrelevant in the bigger picture. Just on Planet Earth, for most of us our names and the small triumphs and defeats of our lives with be completely forgotten within a decade or two. Even the great ones like Shakespeare or Mozart only manage to spin it out for a few centuries—a blink of the eye in the whole history of humanity, and not even that in the history of our planet. Then, if we widen our perspective to see that we are dancing our little dances on a small rock in a tiny corner of an unimaginably vast universe, our irrelevance becomes even more stark.

If we relax into these feelings of inadequacy, as we might relax into falling asleep at night or into letting thoughts settle during meditation, they become a portal into something bigger. They become a trigger for the mother of all prayers:

“Not my will, but Thy will be done. Whoever the heck you are, about which I have not the first clue.”

Here is the clincher: if we fight with these feelings of inadequacy and see them as toxic and destructive, it requires building up of an inflated sense of “me” as important and significant. That is more or less what we refer to as “ego.” But if we relax into them and accept their essential truth that, “Yes, it’s true, I am inadequate; as a separate, contracted entity, I am more or less just an interference pattern to the great force that gives me life…” they pass quickly. They become nothing more than a bardo state into Ahhhhhhhhhh, the deep relaxation of being played like a hollow bamboo instead of holding onto the struggle and pressure of success and failure.

Allow yourself to be not enough, for real, now and then, as part of the ride of being alive as a human being. Then feel the deep relaxation of being carried by a wave far greater than your own understanding.