How my Son helped me Love my Body. 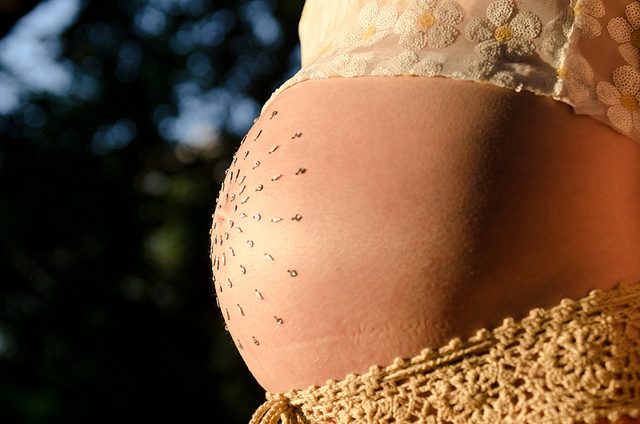 Up until I became a mother, I’d walked a long journey in transforming my love/hate relationship with my body.

In my teens I was striving to look like the girls in the magazines, to the point of being bulimic. The media today has slowly changed to represent a more ethnically inclusive and accurate representation of women’s beauty, but in the 1990s, the more emaciated a woman was, the better.

Internalizing that message of perfection created a relationship in which I carried my body as a separate entity that needed to be coerced into looking like that sickly ideal of “beauty.” I related to my body in extremes of carrying it like a bragging flag of accomplishment or a prison dumpster. It was a proud flag when, through much self-denial and torture, I’d reach the ideal waist size. It was a prison dumpster when, in the midst of a stressful episode, I’d self-medicate with whatever instant, fatty, sugary or salty food I could find. Physical nourishment was either a triumphant battlefield or a no-holds barred reprieve of indulgence and escape.

Years later, I’d come far in building more holistic habits of eating, exercise and ignoring the hypnotism of mainstream media. Through exercise that felt good to me and whole foods I learned to prepare, I was the healthiest I’d ever been. I biked through my local city as my main source of transportation, close to three hours per day, and weight trained at the gym. I reveled in the sheer aliveness in all my veins and muscles of being this active and robust.

Motherhood, though, brought the relationship with my body to a whole new level.

Six months into my pregnancy I still wasn’t showing and I began having stomach cramps. My doctor told me that I had so much muscle in my abs that the cramps were due to my body actually breaking it down to make space for the growing baby. I beamed at receiving proof of my physical prowess.

Once I began to show and felt the baby’s first kicks, my physical pride softened into a heartfelt worship. I began to see my body as an intelligent being who’d always been a devoted servant through all the abuse I put it through. Now, in the light of my pregnancy, my body took center stage in its sophistication and orchestrated mastery.

A whole new world opened up to me, leaving me in awe and reverence. Big, blue veins vigorously throbbed across my olive torso. They pushed their crimson red sustenance with the tenacity of the rising sun. In my seventh month of pregnancy, whenever I sat still, I’d hear a loud whooshing noise in my ears—my own blood being pumped at a dizzying pace. All of my cells would not rest in the building, sculpting and feeding it of this new life.

An ancient wisdom was being carried out to bring all the goodness in every last reservoir of myself to this growing child. The summation of all the good my body had ever experienced—whole foods, deep sleep, regular activity, vitamins, the random green juice—was now being served to the hungry seed of new life within me.

I’d look at graphic pictures of embryos in their different development stages, mesmerized by the process taking place in its exact time and right sequence. My eyes would water staring at the reflection of my pregnant nakedness, in awe of being, for the first time, a walking miracle.

Before the magical turning point of pregnancy, I’d always apologized for everything. I carried myself in the world like one big, breathing mistake who needed to explain why I was taking up space by simply existing. I carried a hidden feeling of doom into all of my relationships, thinking that once they found out who I really was, they would leave, and who could blame them? I wanted to leave myself and I did. I deserted myself with every self-negating and gut-instinct-smashing decision, big and small. My life was full of these.

Life was not miraculous to me, until I became a mother.

The arrival of my newborn son was like being visited by a prince from a heavenly land far beyond my small and suffocating world. I felt privileged to be in the presence of someone so pristine, complete and perfect. There was so much potent, palpable ease and vitality in this bundle of flesh and breath before me. I fought sleep exhaustion the first few weeks to gaze at him as he slept.

What surprised me the most was that my body was enough for him.

Every inch of it. In the crib he made kitten-like cries, but in my arms he quickly went to sleep. His tormented squalls, when others held him, would be silenced as I nuzzled his voracious little mouth to my breast. My milk sent him into what looked like ecstasy. The expression on his face of satisfaction, ease and milk-intoxicated bliss was unbelievable to me. The contrast of his pinched face when he was hungry versus the oozing contentedness after nursing left me awestruck. How was my experience on the other end of the breast not as climactic?

I was enough for him, more than enough—I was who he wholeheartedly preferred.

As his little body grew plump and mobile, so did my admiration for my womanly existence. As I became familiar with the variety of cries, whimpers, and grunts, it became easier to decipher his needs and my confidence grew. Delight, wonder and awe punctuated my sleep-deprived, dream-like state.

As he began to crawl, walk and then run, I tried to catch up. I could feel how my body had changed when I awkwardly ran to catch him one day in the park. My body parts felt disjointed, as if they’d forgotten how to move in those ways. My main exercise for the first year after his birth was a daily routine of going from bed to kitchen to rocking chair to bathroom. This was quite a contrast to the vigorous sweat, muscle burn and anatomical demonstration of power that was my life before motherhood.

When my son began sleeping, at 13 months old, for more than five hours at a stretch, my sleep deprived brain fog began to clear and the possibility of carving out time for myself, even if for just 15 minutes a day, became real. During that time, I squeezed in squats, pushups and mommy toddler workouts whenever I could. I needed to catch up to him and be the active mother I wanted to be.

My aim for fitness had gotten a makeover.

It felt like a lifetime ago when I was that girl who self-tortured herself to meet the standards of the beauty industry. As a mom, I began exercising to be able to spring up from crawling under a playground bridge when chasing my son as “jungle monster” without losing my breath. I exercised to be strong enough to swing him in the air with a sing-song voice to distract him from crying for the half-eaten lollipop on the sidewalk he was about to pick up, without my back going out on me.

My body became a home, a primary source of fun, comfort and nourishment for this growing boy. I began to care for it just as I babyproofed and cleaned my house for him. Mothering him helped me see my body as an instrument of love in how I played with him, fed him, protected him and most importantly the presence I brought to each moment with him.

Health and beauty for me today means being the best conduit for providing love in each moment. 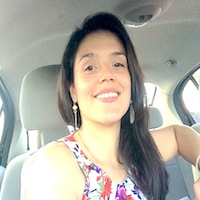