In Trump I Trust. 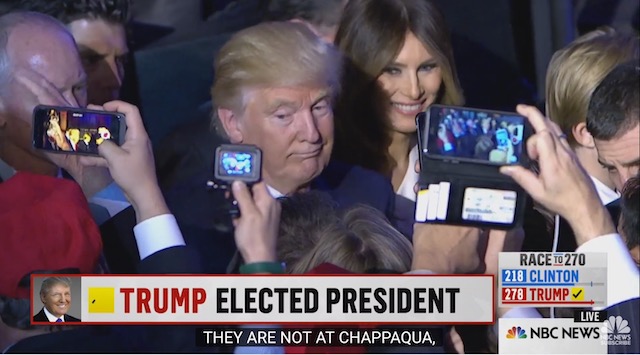 As I walked out of the bar in Manhattan at about 11:30 Tuesday evening, this is what I saw written on the faces of the youthful crowd that had just an hour earlier been nervous yet optimistic, cheering with beer and wine and animated about the future about our nation.

But now reality was beginning to set in and the thinned crowd was subdued. Florida was going the wrong way.

As I walked down the sidewalk, I clung to the last vestiges of hope, futilely attempting to put positive energy out into the world and console myself with whispers of Hillary will win; Hillary will win. But as I continued walking I glanced at the broadcast in another bar to see the final signal of defeat: Florida went Trump. Nobody called it; nobody could really fathom it. But everyone knew. Trump would be the next President.

When I got home I turned the TV back on. My mantra had become Everything will be ok. Our nation is strong. Good will prevail. But I couldn’t sleep until I knew for sure. Wisconsin. Pennsylvania. Michigan. They all, unbelievably, went Trump.

How did this happen? How did everybody miss just how pervasive his support was? How were all the experts so out of touch?

As much as I would have preferred a pantsuit nation lead by the first female president, a large part of me knows—and has known for a while—that our country desperately needs change. While I am still chagrinned that Trump has astonishingly become the leader—a loathsome face of change—I cannot deny that part of me that has seen for years how flawed our system is, how corrupt politics have become, how out of touch our leaders are, and just how necessary this wake up call is.

This election has forced us to reckon with this reality: our system is broken. We, as a nation, desperately need healing.

This is what Trump—and Bernie to an extent (oh, the regret)—has done for America: he has woken us up. We are at the brink of a massive turning point. We, as a nation, have to dig deep. We have to unite. We have to heal.

Change is scary. And so is healing. True change, true healing, true progress all arise from the depths of tragedy, failure, and destruction. We can no longer deny the truth of our flaws or the depth of corruption that pervades every facet of power in America. But change is messy. So we have to fight through the muck and the rubble first.

Before Trump took the stage to make his acceptance speech, I knew we had a choice. We could devolve into anger and protest. We could deepen the rift in our divided nation. We could blame and shame and live under the veil of fear and doubt. But this path serves no one.

That’s what I chose: trust. I posted this on Instagram as his speech came to a close and I turned out the light, half hoping I would wake up to find it was all just a bad nightmare:

I’m trusting the Universe that good will come of this. That when the dust finally settles, we will move forward united on a path of progress. That we will find common ground and forge bonds of trust. That we will come together to rebuild an even better version of our great nation. Because I can’t lose hope now.


Our nation was built on faith and trust in a better way, so it is with faith and trust that we must step forward into this new reality. Trust that we all want the same things: peace, love, prosperity, and happiness. Faith that we can work together and continue to build a better future for all.

Some would say this election proves that we as a nation have failed. Personally, I refuse to declare or accept failure. I’m looking for the lesson and the opportunity. I’m looking to dig deep and figure out what needs fixing, why things went wrong, and how to fix it. I have not a clue what the future of our nation looks like, but if we are never better than when we are challenged, then we have never had a better opportunity than now to step up and actually become better.

Well, America, we have stepped into the unknown before. Here we are, I suppose, at another reckoning; another turning point. Now we have the opportunity to show just how great we are.

Don’t get me wrong. I can’t ignore the divisive, hateful, prejudiced, misogynistic words of Trump’s campaign. I won’t forget them. And I can’t forgive them. It’s impossible to when the damage his words have caused is beyond measure. I implored people to reconsider a Trump vote because his callous comments about sexual assault hit too close to home. And as a recent cancer survivor who had to quit her job over the summer to undergo treatment, I need an affordable healthcare system. I personally have a lot at stake here.

And I certainly don’t wish to minimize the legitimate grief so many in this country are experiencing or ignore the cloud of fear that has descended upon those who were with Her. Feel the shock. Feel the grief. Feel the despair. Feel the anger. Process all of it.

But then let it go, accept it, and regroup. Focus on solutions. Focus on the future.

Trump has done some good already. He has placed a glaring spotlight on the darkest shadows of our nation. The near-blinding light jolted us awake. Now we can see the true nature of our deeply divided nation. Now we can no longer ignore the glaring flaws in our system.

Now, I cautiously choose to trust the gracious side of him that emerged when he took the stage to accept the results of the election. The one that acknowledged the great service Hillary has provided our country; the one that was honored to meet with Obama; the one that has called for our nation to come together and unite. If this side of him is here to stay, there is some hope.

I’m still apprehensive about what is to come. I worry that the changes he will bring are not those of the healing and progress we need. But I wonder how much of his hateful rhetoric was a horrible yet brilliant act to garner votes. And I cling to the suggestion made by an acquaintance who knows him personally that he is actually a pretty good guy when you’re with him in person. And more than that, I am hopeful in our nation’s ability to regroup and mobilize. The damage is done. All we we can do now is move forward. People are awake now more than ever. And in every setback lies an opportunity.

Now is our opportunity to walk down the difficult path of true healing and real change. 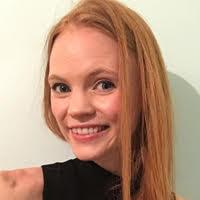 It’s Time we Stop Trying so hard to Heal.