There’s a Hidden Upside to this Election.

Bonus: what the Electoral Map would look like if only people on mescaline voted: 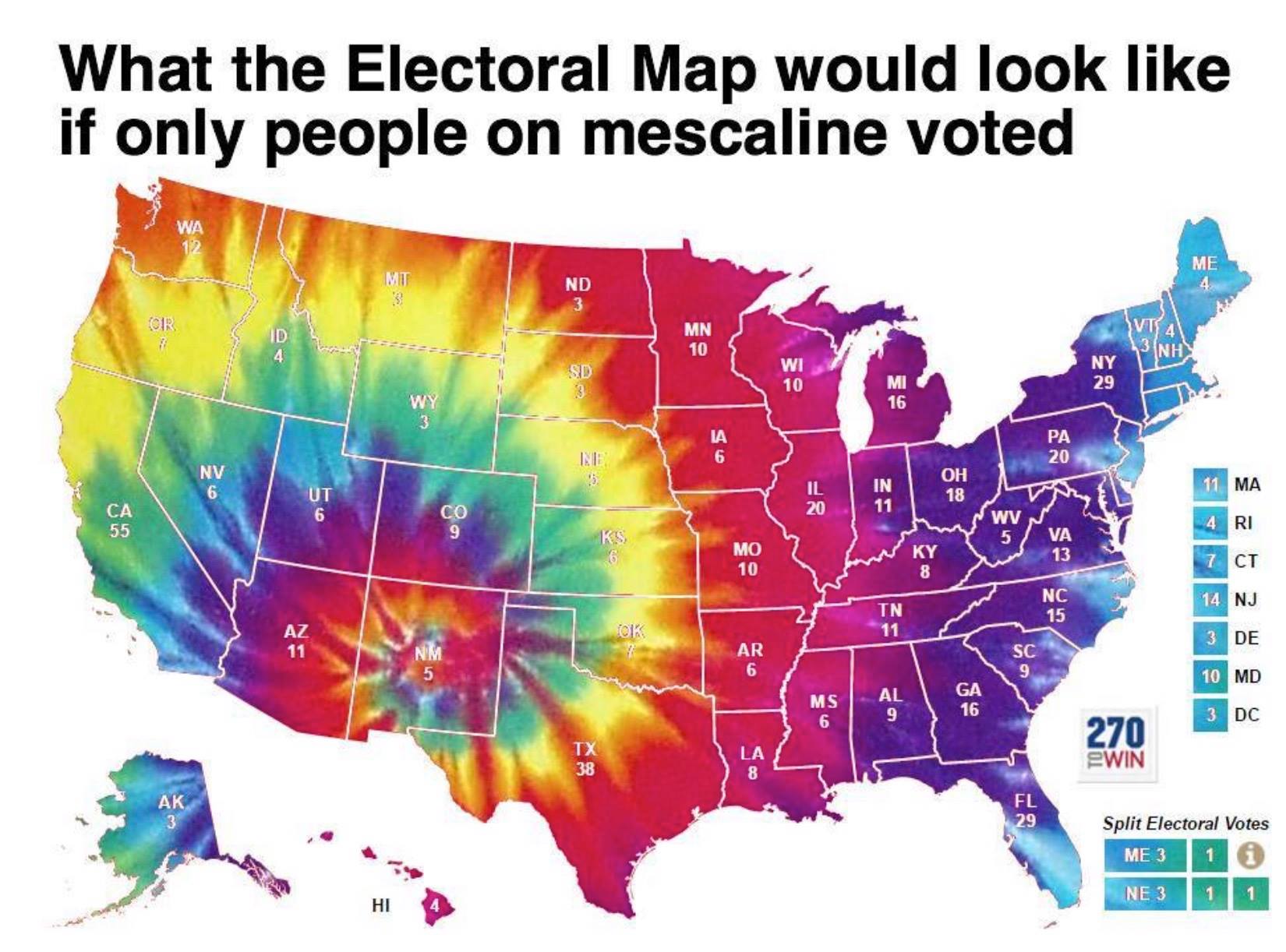 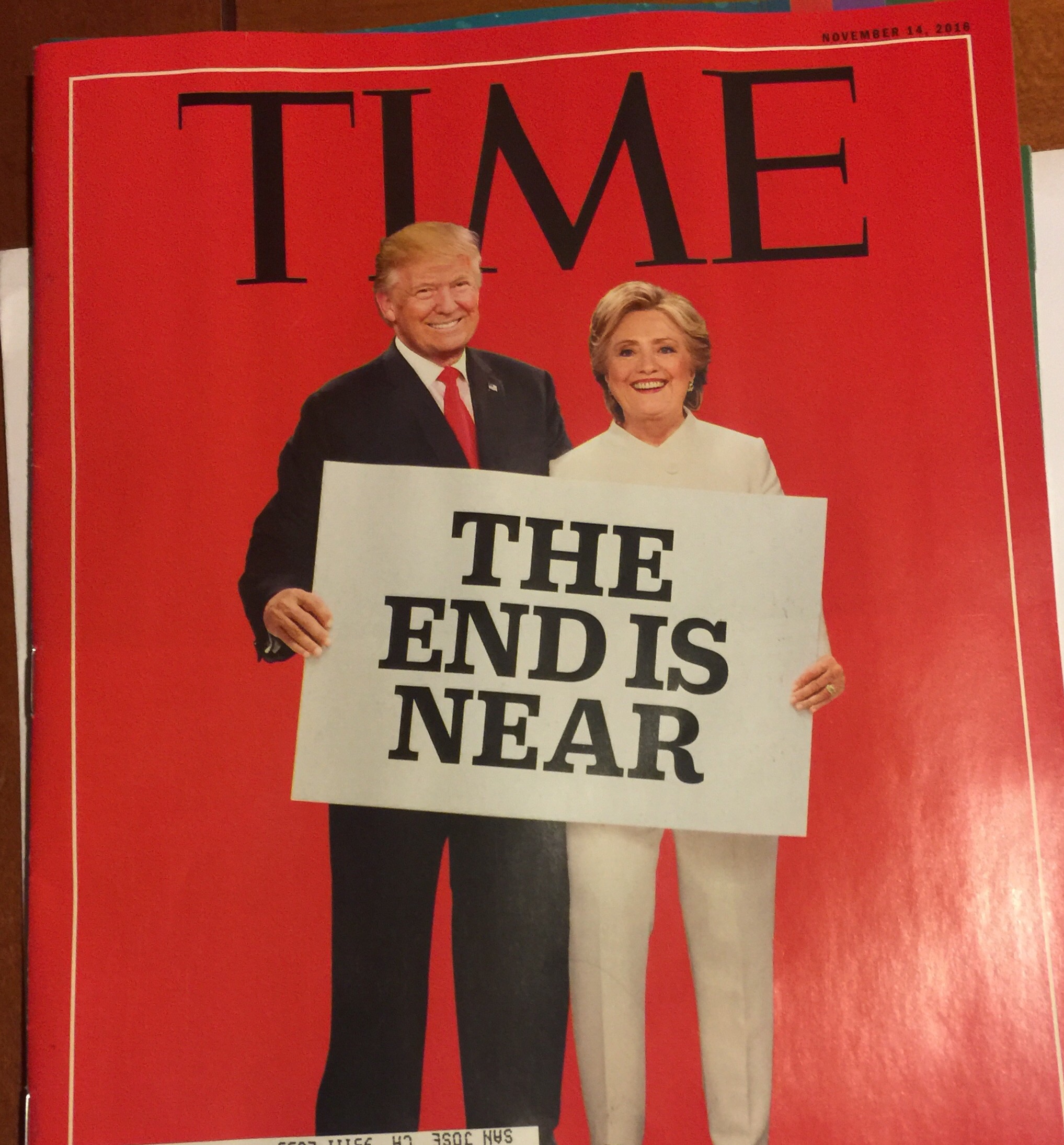 All this homophobia and xenophobia etc etc is bringing all the pus and inflammation and disease out to the fore—now it’s our job to expose it for what it is. This could be the dying gasp of the old white men who make Fox the most popular thing there is. Young white men and college educated whites are far more progressive.

From a Buddhist pov, bad news isn’t bad news: bad news is exposing what’s already there, and now we can talk and connect. Stop blocking Trump fans on FB, start talking to them with respect, without hatred, and educate, educate, educate–without being condescending or fearful. Many of them are good, good people, and many of “us” are just as hate-filled and self-justifying in our hate. We just hate and fear different things.

Finally, that said, right on: we are only days away from possibly electing a fear-mongerer who would destroy democracy, our environment, our social fabric…he must be stopped and re-exposed for the two-bit tyrant that he is.

Share your message on elephant–where you may reach thousands upon thousands of folks. I put up a blog about this kind of thing yesterday that’s reached 30K and counting. Support independent media, not just Zuckerberg. ~ ed. 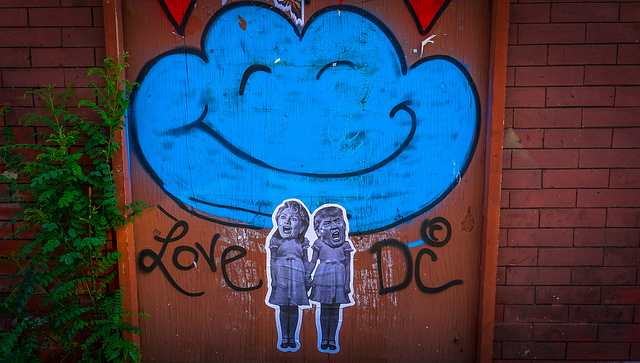 “Humanity is now faced with a stark choice: Evolve or die. If the structures of the human mind remain unchanged, we will always end up re-creating the same world, the same evils, the same dysfunction.” ~ Eckhart Tolle

If only I had a dollar for every time I’ve heard, “I’ve never seen a campaign like this before!” as I traveled all over the USA and Canada this summer.

It can be a little daunting with all the negativity, lies and broken promises in politics. Many of us wonder, “Who can we believe, who can we trust? Who will listen to our needs and address our concerns?” We sometimes appear to be a nation that is falling apart at the seams.

But what if we are not falling apart at the seams at all? What if this campaign is just shaking us all out of our complacency?

Maybe this crazy campaign is simply about the evolution of humanity—an unraveling of old illusions.

There is nothing new happening in the personal or political lives of either Hillary Clinton or Donald Trump that hasn’t happened before in the political arena—or the lives of everyday people, for that matter. We have all played our own part in this subculture of secrets. It’s just that now with modern technology we have the means of uncovering and making public what has previously been held in confidence. But when secrets are revealed they lose their power. And while things get worse before they get better, they may eventually set us free.

To be sure, secrets are being revealed, illusions are being dissolved and conversations are taking place about unacceptable behavior that will no longer be tolerated from our society. Respect for everyone has to become the norm, not the exception for a few elite. We are saying no to things that have been a part of our underground culture for many years, and we are demanding honesty and change.

Generally speaking, we have become a society of non-informed, non-thinking people. “How can that be?” you ask. Because we rely on the opinions of the mainstream and social media and rarely do we go collecting our own information or checking the facts for ourselves

For example, I just returned from a four-month trip where I traveled up the West Coast, across Canada to the Great Lakes and eventually finished up in Missouri before heading back to Arizona. When I began the trip, like many people, I had had it with both candidates. I wasn’t going to vote for either and I was pretty clear about that. However, over the 15 hours that I drove from Missouri to New Mexico, I listened to talk radio stations like the BBC (British Broadcast Communications), NPR (National Public Radio), lots of Christian stations as well as local liberal and conservative talk shows. I was even able to hear a station where people from the United Kingdom were able to call in and give their opinion about what’s happening here in the states. By the time I got to New Mexico, I had decided that while I still wasn’t happy with either candidate, I was going to vote and I was going to vote for change.

When I arrived in New Mexico, I flipped through the television stations to watch the news. And after just one hour of mainstream media news, if that was all I had to go on, there would be no way that I could vote for the candidate that I felt would offer change.

So what if all the negativity that has come into play is simply a tool for us to begin to think for ourselves and not just rely on the opinions of others or the mass media? What if this crazy campaign enables us to see from different points of view and to gently place a toe outside of our comfort zones and experience what it feels like to walk a mile in another’s moccasins. What if this crazy campaign gets us to begin our own personal evolution and we start to love and respect ourselves, which in turn helps us to begin embracing the uniqueness and value of everyone around us?

Then this crazy campaign wouldn’t be so crazy after all, now would it? It might just be in divine order.

Let’s make a resolution to begin now. Let’s use this madness as a catalyst for change. Let’s change the world one person at a time. Let’s let it begin with us. 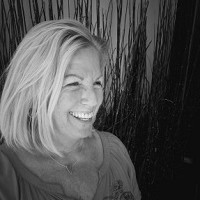