On the Brink of Change: Healing the USA. 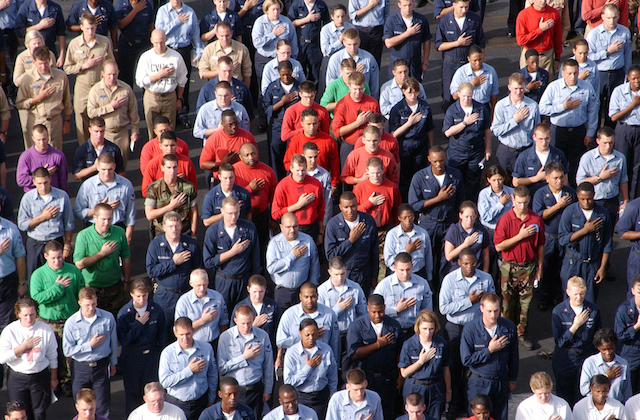 Our United States of America have been anything but united this year.

We’re on the brink of change, and the majority of the world doesn’t feel like it’s going to be positive.

I thought for a moment the time would come when we would say, “I. Told. You. So.” But when everything (possibly) goes south, we won’t be saying that at all. All of our efforts will be focused on self-preservation—and on healing our world, too.

Some of us are watching the rise of fascism and hate rhetoric. We can see it building; we know what it means, even if we don’t know what form it will take or what the consequences will be. We are taking what steps we can to turn the tide and hoping those will be enough.

No, we won’t be saying, “I told you so,” because we’ll be too busy saving your a**es and our own.

Here’s what conservatives can do:

1. Hold your leaders accountable for their actions just as strongly and with as much discretion as you would do for the opposition.

2. Instead of making fun of the fears of the opposition, assure us that you will not sit quietly and allow the current administration to infringe upon basic human rights. Let us know that, while you don’t think this will happen, you would never allow it to happen, sitting idly by just because you belong to the same party.

3. Never. Glorify. Bullying. Or hate. Call that sh*t out at every level—from your friends to your leaders. It’s never okay. We need to stop it and to tell others to stop it.

4. Show us with actions—not words—that you support human rights. It’s not enough to not be racist or sexist or promote hate. Your actions must back that up—particularly after an election year where the conservative party backed a candidate whose very lifestyle flies in the face of nearly every conservative value.

5. Don’t toe the party line at the expense of everything else. “United we stand or together we fall” was not meant to apply as a one-party policy. This must be our nation’s attitude. “United we stand” doesn’t mean blindly supporting our leaders when they’re making poor decisions. It means being united for a common goal and working together to make life better for everyone—because if we don’t do this, we will all suffer together.

Here’s what liberals can do:

1. We need to put our money where our mouth is. We need to remember that our actions are greater than our words, and our impact is greater than our intentions. We have to stop talking about the importance of action alone and start acting. Make phone calls. Send letters and emails. Protest. This does not mean violence or rioting; this means taking action within the bounds of the law.

2. We must focus on inclusion. Activist groups must avoid further marginalizing people of color, the LGBT community and other groups. A liberal agenda should always focus on being inclusive, or it will fail. This isn’t the time for white fragility to take precedence over everything else. We need to make sure our work includes everyone and that we’re open to feedback from all members.

3. Go high. We must avoid bullying behaviors as well. It’s tempting to play dirty when we see our opposition doing so, but we have to remember that this never helps. Further, conservative values aren’t our enemy; they are simply a different perspective. We must stop preaching to the choir or trying to persuade the other side; instead, we can learn to listen to one another.

4. Never stop—even when it feels futile. We cannot allow ourselves to get so discouraged that we stop doing the work. If we want to make the world better—or at least stop it from getting worse—we have to put in the effort. We need to reach out and support each other; it may take a lot of work for just a little progress, but it’s worth it.

5. Use effective communication skills when speaking to others. We need to stop making accusations or blaming and shaming. Instead, we can use feeling statements to communicate how actions impact us. Speaking calmly, we can communicate with the goal of understanding and being understood—rather than winning or scoring points off one another.

Here’s what we can all do:

1. We can stop dividing ourselves into sides. We’re one nation. Conservatives are no more patriotic than liberals and vice versa. We’ve created the concept of parties, and 2016 felt like the most vicious game of dodgeball ever played. At the end of the day, none of us won. We need to encourage our leaders to work together, rather than urging them to block progress if it’s initiated by the other side. We need to hold them all accountable to make our country better—and not just for rich, white men.

2. We need to quit bullying across the board. Stop calling conservatives sheep and liberals snowflakes. What grade are we in, again? Oh, that’s right. We’re adults. We need to stop resorting to name calling and begin to understand that each side simply views life based on their own experiences. This isn’t a matter of right and wrong; it’s a matter of perspective.

3. We need to stop reading fake news and biased news. CNN and Fox should be reporting the same stories—not stories so vastly different we could be talking about other planets. We must abandon the biased reporting… but we also need to stop calling reporting biased just because we disagree with it. If we research stories before we share or comment on them and work to understand both sides, we can begin to actually be informed about the issues.

Recently, I saw the cover of the Wall Street Journal. The leading stories were about Berlin and the Middle East. I felt the deepest sense of foreboding in that moment—and I had only glimpsed the headlines.

There are movements happening across the world. It’s like watching a chess game; even knowing nothing about chess, we can still sense when something significant is happening.

We’re watching and waiting, but we need to be prepared.

Even if we don’t believe that anything will happen, we can still choose to be a part of uniting—and not dividing—our nation by our individual actions.

Stand or fall, we do it together.