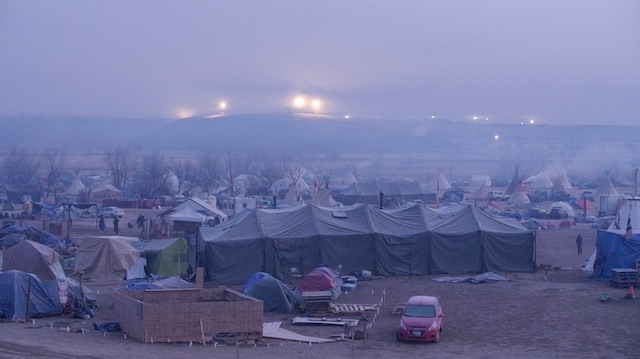 This photo shows the Oceti Sakowin Camp at Standing Rock Indian Reservation in 10 degree temperatures on Nov. 19, 2016. The stadium spotlights in the distance were erected by Energy Transfer Partners to illuminate the Dakota Access Pipeline as part of their militarized security measures.

Since this past April, the Standing Rock Sioux Indian Reservation in North Dakota has become home to many thousands of people protesting the Dakota Access Pipeline.

Several camps, the largest of which is the Oceti Sakowin Camp, have welcomed protesters of all ages representing myriad groups, nationalities, and ethnicities as well as an estimated 300 Native American tribes. The majority of self-proclaimed “water protectors” stay for a few days or a week with some making repeat visits while others have been standing strong for the duration of the protest.

A group of some 1,500 U.S. military veterans is planning to be en route shortly with the purported intention of acting as human shields for the protesters.

Energy Transfer Partners, the company behind the controversial $3.8 billion pipeline, used loopholes to avoid the process of submitting a true Environmental Impact Statement for the 1,172 mile pipeline that would carry crude oil from the Bakken Shale of North Dakota to Illinois.

Behind closed doors, the company has admitted it will send oil to Asian refineries, thus creating minimal permanent jobs and having little benefit for the United States. Robert F. Kennedy Jr. estimates that less than 100 permanent U.S. jobs would result from the pipeline, similar numbers to the Keystone XL pipeline which was stopped by President Barack Obama.

The Sioux people and protesters worry that the pipeline will have potentially disastrous effects on the Missouri River, which provides drinking water to the Sioux and 18 million Americans.

The Sioux also claim that the pipeline has destroyed sacred burial grounds and rightly argue that it passes through land that is theirs according to the Treaty of Fort Laramie in 1851 and 1868. The United States government later broke that treaty after gold was found in the Black Hills of South Dakota and have been unlawfully taking vast tracts of this treaty’s land from the Sioux Nation ever since. The United States Supreme Court found in 1980 that these treaties were broken illegally and offered a sum of money as compensation to the Sioux. The Sioux refused to take that money and it has been sitting in a government trust ever since, with a current value of well over $1 billion.

The numbers at Standing Rock have swelled at times to an estimated 7,000 people, but have been dwindling rapidly since their peak at Thanksgiving now that the harsh North Dakota winter is settling in. Heavy snow and sideways winds with gusts of 45 mph have battered the self-proclaimed “water protectors” recently, and the several camps at Standing Rock are working around the clock to fortify their camping setups, keep warm and survive.

Protesters have endured these conditons while being subjected to a barrage of threats of eviction and fines from the Army Corps of Engineers, Governor Jack Dalrymple, and the Morton County Sheriff’s Department. These recent threats come after months of a building militarized operation intended to drive out protesters that has included police forces from multiple states, private security with dogs, and military contractors who have used water cannons in freezing temperatures, concussion grenades, rubber bullets, mace, tear gas, armored vehicles, long range acoustic devices and more against the protesters, injuring dozens and some very seriously.

Three of us from Boulder, Colorado traveled to Standing Rock on behalf of the Boulder Weekly from November 18 – 20. While there I met Liam Cain, who was unionized out of Cheyenne, Wyoming and is a former pipeline laborer.

The video features an interview I did with Liam that touches on his experience building pipelines, his take on the Dakota Access Pipeline, why he decided to stand with the water protectors and how he has supported them, as well as some bigger picture perspective on environmental racism and how real change is forged in this country.

December will be a critical month at Standing Rock. The pipeline has been mostly constructed in this area except for drilling and running it under the Missouri River. Protesters have vowed that they will not back down in spite of the eviction notices and threats, with December 5th posing one deadline for possible eviction of the Oceti Sakowin Camp which is the largest camp at Standing Rock.

President Obama has not shown much interest in stopping the project but could still demand a thorough Environmental Impact Statement from Energy Transfer Partners. Such an action would be irreversible by President-Elect Donald Trump, who has close ties to the pipeline company. He had a reported $500,000-$1,000,000 invested in the company as recently as this summer although a spokesperson from his White House transition team states that he divested recently. Energy Transfer Partners CEO Kelcey Warren also donated over $100,000 to PACs backing Trump in his successful bid for the presidency.

Time will tell what happens at Standing Rock, but Liam Cain’s statements in the video from our trip portend that this is the beginning of something far greater than one localized protest.

Solidarity actions have already taken place in hundreds of locations around the country, often at banks such as Wells Fargo who are funding this pipeline. Protesters in Iowa recently attached themselves to machinery along that part of the Dakota Access Pipeline route. Liam sure appears to be on point with his assessment that what is happening at Standing Rock “is really really powerful.”
.

The World is Watching us F*ck Up at Standing Rock. {Graphic Video} 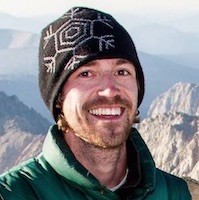