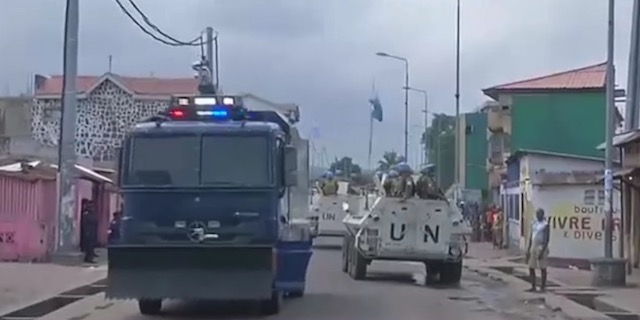 The last year has been perhaps the worst for democracy in decades. Right-wing nationalists were elected across the globe. The most powerful nation voted its first fascist to the presidency. And authoritarian governments were cheered on as they joined against pro-democracy rebels in Syria to commit perhaps the first multinational genocide in modern history. But young people in the streets of the Democratic Republic of Congo may have just scored a rare win for democracy.

Protesters took to the streets last spring to demand President Joseph Kabila relinquish office. And his forces killed several dozen, the Catholic Church stepped in and negotiated a deal that will involve the president stepping down amid new elections. The constitution limits the president to two terms of office, so if he sticks to the deal, this will be the Congo’s first peaceful transition of power since 1960—but many doubt he will.

Kabila was thrust to power in 2001 following the assassination of his father, President Laurent Kabila. It was the middle of a civil war that killed millions and involved countless militias and several African states. And when it was finally over, five years later, Kabila won the presidency in a fair and free election. Things were looking better until he won again five years later—only this time in a rigged vote.

Now the Congolese have had enough. According to the Congo Research Group at New York University, if elections were held today, Kabila would get a mere eight percent of the vote. Meanwhile, the approval ratings of his top two contenders stand at 65 and 86 percent.

The Congolese do not like their president because their state is mired in corruption. Transparency International recently ranked it 148 out of 167 countries in their Corruption Perception Index. And the score is mirrored in Congolese attitudes toward the state. A survey reported by the World Bank in 2005 asks, “If the state were a person, what would you do to him?” To which a majority of respondents gave the unequivocal answer, “kill him.”

The Congo suffers from substantial structural challenges unlikely to be ameliorated by even the best of governments. The country covers the vast forests of the Congo river basin, whose endless tributaries and torrential rains throw up massive obstacles to road building. This makes it difficult to transport soldiers from the capital in the west to conflicts in the East. Meanwhile, it stymies efforts to transport food in the east back to the capital in the west, where as a result, but a few years back, half the population was eating only one meal a day and a quarter of the population one meal every other day.

The political scientist Jeffrey Herbst has noted that poor African states, governing vast and underpopulated territories, have always struggled to project power into their hinterlands. But the problem is particularly acute in the Congo, where the country’s vast mineral wealth attracts foreign powers and militias, requiring the vigilance of a strong and loyal military. The only problem is that the mineral wealth also attracts thieves to government, who have left the military poorly paid and provisioned. Hence, the Congolese commonly complain that in spite of their poverty they are one of the richest countries in the world.

The state has long struggled with paying its soldiers and civil servants, whom citizens expect to skim a little off the top. The situation got so bad under Mobutu Sese-Seko, Africa’s most notorious Cold War kleptocrat, that he once asked officials to just “steal a little.” Seeing in the Congo a potential failed state liable to export its conflicts and populations abroad, the international community has often picked up the slack, funding massive aid projects and negotiating elections.

And it is for all of these reasons that the protests might actually pull through a rare win for democracy. The state is weak and despised. Its soldiers are disloyal and poorly organized. The international community is invested in better Congolese governance. And the young men in streets, what the Congolese call their “street corner parliamentarians,” have little to lose.

If the negotiated transition is carried out it will be a double victory for both the Congo and the world. The Congo will have another shot at electing a more honest steward and the young people in the streets will send a message to dictators the world over. The Congo is not Syria, and Syria is not the world—and it is time young people seeking freedom begin to win.

The Congo has long been a world leader in hunger and violence, corruption and rape, at one point acquiring the moniker, “rape capital of the world.” But now in perhaps the darkest hour for democracy in generations, they have taken the lead in restoring hope to the world.  The Congolese are a largely Christian people, so perhaps they will see themselves in the words of Jesus, “The first shall be last and the last shall be first.”

The transition was negotiated on December 31st, the last day of perhaps the worst year for freedom since 1941. May it be a harbinger of better things to come in the new year.