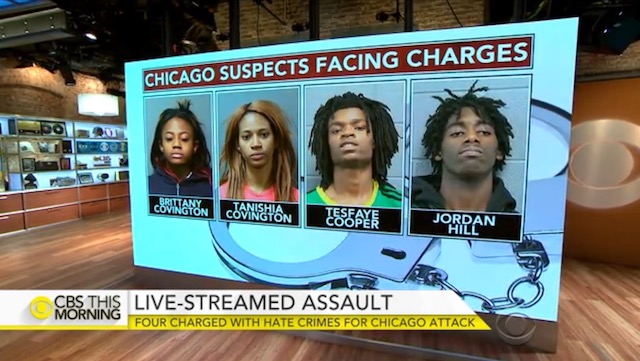 Sitting in my class of 16 and 17 year-olds, I find it hard to believe that any of them could be capable of what the four young men and one young woman are accused of doing in Chicago. I’m not naïve. I just know them.

A group of five allegedly held another man, a classmate of one of the attackers, for up to two days. During this time the captive man was beat, taunted, humiliated, and tortured. The thought of this makes me physically ill.

Did I mention the victim was mentally disabled?

Oh, and the perpetrators were black. The victim white. The attackers were using derogatory terms about white people as they injured this other person. Did this incident just change for some? Is it worse? Is it an “inevitable reflection of the current state of race relations in America?” How does the conversation change when race is involved?

The assailants also declared their hatred for the president-elect. And that may very well be the tipping point for some people to pay attention and have an opinion on this crime.

The fact that all of this was recorded on a cell phone and shared on social media adds an element to this horrific act that is part of an additional conversation that many will want to have.

All of these details to this news story will be talking points for the day. I do not mean to imply that these are not all issues worthy of discourse. But, a group of four allegedly held another man for up to two days. During this time the captive man was beat, taunted, humiliated, and tortured. Isn’t that where we need to start? Isn’t that, in and of itself, worthy of our full attention and commitment to action?

It’s not that these issues of the safety of those who are weakest among us, or race, or politics are unimportant, but they are not the most important issue in this event. I am not one who thinks these issues cannot be addressed and that individually we can’t make a difference. I am not at all turning a blind eye to these points. But, I am specifically focused on the central issue as I see it.

I am sitting in my classroom of 16 and 17 year-olds, almost evenly divided between male and female, black and white, a couple with discreet challenges, from all socio-economic backgrounds. I watch them work on an assignment about world issues in small groups and see how they blend and mix, laughing and working. And so I say, “Hey guys, have you heard about the attack in Chicago yesterday?” And I tell them the general details and I listen to their comments and reactions.

Not one of my 28 students focused on the race issue or the politics issue. There was obvious concern about the victim being disabled. But above everything else, there was an initial look of shock on each of their faces, and then you could see the sadness, the disgust, the anger. My students didn’t immediately respond to the controversies, they responded to the lack of compassion. Because they, too, see the central issue. After we dealt with the inhumanity of it all, the other issues were fair game. But first and foremost, a person was harmed.

People, starting with our children, our teenagers, are becoming hardened to the struggles and challenges to those around them. They are being taught “us versus them” thinking. They are being taught agendas and platforms instead of the common thread of humanity and community. But parents and teachers and community members can change that. I promise.

It isn’t about a huge movement. It is about being kind by example. That is where we start. And I know it works because I see it in action every single day. My students do not tease each other because we talk about empathy. When we do group projects, they are reminded every single time to make sure everyone has a place where they feel they are wanted.

When they are obviously having a bad day, I will place a sticky note on their desk that says, “I am sorry today seems tough for you.” When I am having a bad day, I tell them, and allow them to show me compassion. If one is out, I inquire about them, showing the others that no one goes unnoticed. When they are kind to one another, I acknowledge it and praise the behavior I want to see more of. In the hallways, outside waiting for the bus, in the cafeteria, I am always watching to make sure “my kids” are being kind.

Every Friday, all year long, they walk out of my class and hear me say, “Have a great weekend. Be safe and make good choices.”

I am not afraid to tell my students that I love them. As a matter of fact, I make a point to, and I know they love me, too. But it is not just me. It is my colleagues, my administrators, the paraprofessionals in our schools. We respect our students and they respect us. We are a high school like any other school in this nation, and we have gone entire school years without a single fight. We have “Monday Motivation” where we show a short video to start the kids off with a positive message for the week ahead. We provide an environment of safety and caring.

When I speak to parents, I tell them something positive about their child. Always. Parents, especially ones who have children with difficulties, are so used to hearing about the problems, that when I approach them with compassion and say, “I imagine it’s not easy, but you are doing a great job. Your son is a kind and considerate person. Now, we can work on the grades.” And then, hopefully, their home life may be a little bit more peaceful, if only for a moment. But those moments count.

As a parent, my son and daughter are held to the highest standards of compassion and decency, to me, to each other, and to the world around them. We discuss incidents like what is on the news today and I allow them to express their hurt and anger and disappointment in the horrible choices made by these individuals. We do talk about race, and politics, and the things that make us different…but those conversations are never without a part where we talk about our similarities.

We talk about controversial issues and I teach my own children and my students that both sides have points they consider valid. Respect that the other side feels as passionately as you do, and then fight for the cause you believe in, not against the other side.

Would all of this have stopped the attacks in Chicago? I don’t know. It is not a panacea for the masses. But I know for a fact that it makes incidents like these less divisive and more about the person who was hurt. By focusing on the humanity in us all, we begin to see how a story like this wounds everyone. And we care about one another. We don’t want anyone to hurt. We don’t hurt each other.

So, yes, discuss the talking points on every major news channel, because they are not issues to be ignored. But first, always, address the inhumanity of the act and the compassionate response. And then, every day, be kind. Love them big. And trust them to go forward and do the same. It’s a start.