Check out who The Dalai Lama just gave $25k. 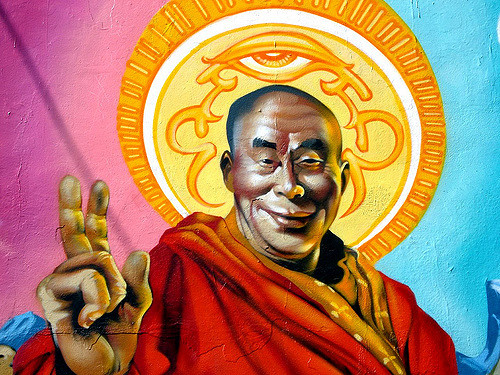 In a true act of walking the talk, His Holiness the Dalai Lama just gave $25,000 to Utah’s homeless aid program.

The money came from proceeds from his visit and speech at the University of Utah’s Huntsman Center last June. He requested that all the money earned go to worthy causes, and the proceeds were divided between Utah’s homeless aid, Primary Children’s Hospital, and the Utah Tibetan Foundation.

The generous donation is intended “for food and other direct benefits to homeless people,” as he requested. And although this should come as no surprise to any of us who follow the Dalai Lama, I found it quite awesome that he takes direct action to ensure that no one profits from his appearances and speeches.

This action resonates with me on a deep level because I live in a city with a serious homeless epidemic. The disparity in the greater Los Angeles area is maddening to me. On one hand, we see the plush, gated mansions of Beverly Hills where people live in excess luxury, and just a few miles away is Skid Row, a 50-city-block area of Los Angeles that holds an ever sprawling tent city where an estimated 2,521 people live on the streets.

Being the sensitive empath that I am, it’s challenging for me not to feel the suffering of so many just outside my door. On one hand, it keeps me humble and grateful for the many blessings I am given every day, but on the other, it’s next to impossible for me to turn a blind eye to the thousands of people living on the streets here in Southern California. I do what I can to help them, and yes, I can always do more, but I have to be careful not to let it overwhelm me too. I tend to feel like, if I help one, I have to help them all—and that’s just not feasible right now.

I sometimes fall into the trap of thinking that I alone can’t make a difference because I can’t help them all, but this is false, and it’s lazy. It’s an excuse.

My proof lies here: There was one time when my partner and I were living on one income, so all we did was bring a box of hot coffee down to one of the homeless camps here in Long Beach. We gave them coffee, hung out, chatted, and prayed with them. They shared their stores with us, and we shared with them. All for the price of $15. And it made a difference to them. They felt seen, heard, and just maybe a spark of hope was lit. I don’t share this for recognition, but rather to prove the point that we think we can’t make a difference because we aren’t rich. But the truth is we can. The light was on in their eyes as we talked.

In today’s world, where hypocrisy runs high, it’s such a wonderfully refreshing thing to see spiritual leaders, such as the Dalai Lama, who continuously walk the talk in the face of all adversity. I hold a deep respect for Buddhist principles and I try to practice them in my own life. I believe strongly in living simply, lightly and minimally.

Regardless of what, or who, influences my daily practice, the Dalai Lama was dead on when he stated in one of his addresses, “This is not a question of one nation or two nations. There’s no other planet where we may move or shift.” And while he was talking about climate change in this particular talk, the same principle continues to define his every action—the principle of doing one’s own part to relieve suffering, and help one another and our planet.

His Holiness is 81 years old, and to my eyes, he holds all the secrets of enlightenment and freedom from human suffering. His sense of humor in the face of the tragedies he has witnessed in his life is like a breath of fresh air to me. In my darkest moments, when I feel the most challenged, it is often his light that fills me up. After all, if he can laugh and enjoy his life throughout the many years of being forced to live in exile from his home in Tibet by the Chinese so long ago, who am I to give up?

As always, Buddhism, along with its teachers and leaders, puts things right into perspective for me while inspiring me to be a better version of myself.