The True Commander-in-Chief isn’t who we Think it Is.

*Editor’s note: “Stop covering politics,” some of our dear readers cry every time we post something relephant. Look: politics are life. Equal rights, empathy, fair economy, healthcare. We can’t ignore what’s happening, and you shouldn’t either. Elephant Journal articles represent the personal views of the authors, and cannot possibly reflect Elephant Journal as a whole. Disagree with an Op-Ed or opinion? We’re happy to share your experience here.

On Inauguration Day, I spent a few moments sitting at a stoplight.

I had been watching the parade on television, but had to leave to pick up my son, who was working out at the gym. While the snow fell, I thought of what it takes to run a government—in a nation, a city, or a community.

I considered the fact that, as a citizen, I depend on government programs to keep the roads safe and clean. I contemplated the essential services that we, as Americans, are accustomed to receiving. Roads. Schools. Public Safety. I felt a sense of awe at the thought of not having the services I had come to expect.

I thought of what it means to be a good citizen and a patriot.

I thought of a man I once knew. He was a business leader in the region, and also filled an important role for local road maintenance. He was not what I would consider a nice man, or even socially conscious. But he always got the job done.

When he left his station at the department of transportation, there was a notable difference in how the roads were maintained. Sitting at the stoplight, with the snow piling up, I felt appreciation for the hardworking men and women who could be counted on to get the job done.

When I returned home, I turned the television back on to watch more of the inaugural festivities. When our new president began to speak, I felt my heart sink and my stomach start to ache. Stop! I wanted to shout out loud. Just stop talking like that!

After my initial reaction, a knowing settled into me. It’s time, I thought. It’s time to take responsibility.

When I voted for Obama, nearly a decade ago, I was younger and full of ideals. I believed, so much, in the promise of a bright future and a leader who would deliver that sunny day. I thought it was enough to vote and speak out, sometimes shouting about what “they” should or should not be doing.

For every thought about how I hope the government protects the environment, I have to act accordingly. It is my responsibility to use cloth bags at the store and consider my purchases wisely, so as to minimize my own footprint. I don’t need that plastic lid when I get a Starbucks treat. And if I really need someone else to make my coffee, I can go to Kaladi Brothers and support a more local economy.

I am American. I am free. But that freedom comes with responsibilities.

It’s easy to look at our brother or sister, or neighbor, who lives beyond their means, and think of how they should manage their budget wisely. But when it comes to our government, no one can agree about what should be cut. Everyone has a cause that is close to their heart.

The truth is, we need the essential services—environmental protection included—but not much else.

The National Endowment for the Arts is great, but if it went away would it really be the end of the arts? I think not. Human expression is ancient. And persistent. Maybe art would become more focused and meaningful. When I lost my first-born child, I became a better mother because I knew, intimately, the value of the life that had been given to me. I came to feel deep regret for the time I had wasted taking my gifts for granted.

Health is a gift, but not one everyone has. For those born with challenges, or who encounter serious illness, it is hard to argue against their right for affordable health care coverage. I was blessed with good health, but my parents also took responsibility. They were cash poor when I was a child and couldn’t afford doctors, so they were strict about eating whole, healthy foods. We were not allowed pop or candy and, to this day, I’ve never had a cavity.

I read an article last week titled, “The Government Ruined my Sex Life & I won’t Stay Quiet about It.” The author argued that if she cannot afford insurance, she will not be able to have sex with multiple partners—as was her “right”—because she would no longer be able to afford STD screenings. My stomach hurt when I read that, the same way it hurts when our president speaks.

But again, I had a knowing: It’s time to take responsibility—for my body, my family, my art, my well-being.

That sense of responsibility manifests in different ways. For some, they take to the streets and bond with others through marching. There is nothing wrong with that. But we can’t discredit the importance of the man or woman who may not be sophisticated or socially savvy, but is up at four in the morning putting their work boots on to maintain the roads that we all use to return to our homes.

A strong nation begins in the home, in the family, and in the community.

I don’t know if I can trust our new president, but I trust the great source of life that created him, and me. I trust faith and action. I look back at my life and see that I was responsible for most of what “happened” to me. I was dealt a certain hand, as we all are, but I spent way too much time blaming the dealer.

Now that I’m older, and have experienced the pain of choices I made, I have a different perspective. I am thankful for the life that was given to me, the liberty to choose what to think, and the knowing that my thoughts and actions create much of my happy (or unhappy) reality.

It could get bad—really bad. I try not to dwell on those fears though, as I don’t want to add to the momentum of things unwanted. I instead try to think of what could go right, as unrealistic as that might seem to those on the far left or the far right.

I don’t know what tomorrow will bring, but I do know one thing: Life is the true commander-in-chief. It is powerful, eternal and in me. It is both a sacred gift and a responsibility. 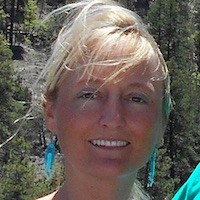