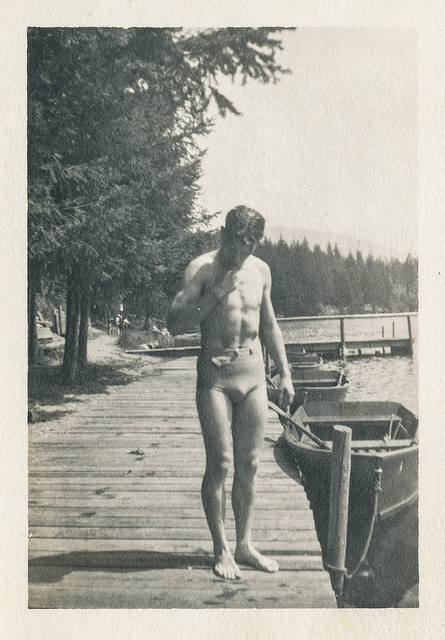 It was a beautiful sunny North Florida day.

My dad lived with me and my three kids—and he had Alzheimer’s disease.

We had decided to visit friends who lived on a small lake out in the country. After we had caught up for a while, we walked down to the lake which was about 100 feet from the house.

“Dad, do you want to swim with us?” He declined. “No, I’ll just sit here on the porch.” I pointed down to the water to show him where we would be, telling him he could see us from the porch, and asked him to stay there.

“We’ll be just a short while,” I told him. As usual, he was agreeable.

After we were in the lake for 15 minutes, I looked up to the house and saw dad walking toward the lake. It wasn’t a long walk, but on the uneven grass-covered ground, sloping to the lake, he was moving slowly and carefully. I came out of the water to ask him what he wanted to do. In a proud way, flashing his famous smile, he said, “I’m going swimming. What do you think?”

Yeah, what did I think? I was loving being out there with him, thankful for the opportunity.

Not wanting to lose the moment, I decided not to get his bathing suit from the car, and began to help him out of his tennis shoes and socks, asking if he wanted to take off his shorts and swim in is underpants. As I expected he said, “No, I don’t do that, I’ll go in my shorts.”

He approached the water tentatively. I held his hand. When we stopped at the water’s edge he began to take off his shorts. He looked down at his underpants and then pulled his shorts back up. He said, “I don’t want to swim in underpants.”

It surprised me how slowly he was walking into the shallow water. When the water was only up to his calves, he began to have a hard time walking forward. He leaned backward and soon, with me still holding his hand, his balance was lost along with mine. Laughing, we slowly moved into sitting positions.

I asked him if he wanted to remain sitting in the water. “No, I’m here to go swimming.”

I helped him up and we continued walking out further where the others were swimming and talking. Although he continued to appear a bit uncertain about what he was doing, he had an amazingly broad grin on his face during the whole experience. I loved seeing this smile. It reminded me of when he was younger and with more mind.

As we walked further into the lake, I asked him, just checking, but already knowing the answer: “Dad do you remember how to swim?”

“Sure, how can one forget to swim?” he said with confidence.

He had been an excellent swimmer. Almost every morning for 20 years, he would swim in the pool of the condo for half an hour. As a young man, he used to swim in the ocean for long distances, paralleling the beach. As his dementia worsened, he went out for his daily swim less and less. Now, he hadn’t been swimming for at least two years.

Even though he expressed confidence in his intention, I had to keep encouraging him to move his feet forward. It was the same on dry ground, when he would stop walking for no reason other than his brain cells weren’t sending the walking messages to his feet. Sometimes he would stop walking and very slowly begin to crumple to the ground when those messages didn’t tell him to stand. “Dad, keep walking,” I would tell him, “You’re going down to the floor.”
“No, I’m not,” he’d say, “I’m walking,” even as one knee was already on the ground.

Today, in an unfamiliar place, but familiar element, he was slowly moving along, almost like another species, or a primordial self being called to return to a previous incarnation.

My friend Nancy walked over to join us. She took dad’s other hand. Now, with the added support, he moved further out with more certainty. After taking 15 minutes for a 20-foot walk, we were still only just above waist-deep, but that was his sign, as he began pulling on our hands to let go.

He immediately submerged his body, coming up blowing water out of his mouth, giving off a sound like some ancient sea animal. He began his simple crawl stroke: right arm lifting out of the water, left pulling underneath, his face submerged on each stroke, slowly resurfacing in sync with an arm, blowing out, taking a breath, legs kicking underneath, never breaking the surface with a ripple.

He was moving along as rhythmically as he had in the past. I walked alongside him until he was out above my neck level. Then I asked him to turn around.

I wasn’t sure if he heard me, with his head going in and out, but he turned, continuing his stroke toward the shore. Nancy remained on one side, me on the other. Once he had his rhythm, he didn’t stop going in circles for 20 minutes, except to occasionally stand, look around, and then continue his stroke.

Two or three times when he stopped, he put his face in the water, sort of blew bubbles beneath the surface, resurfaced, made the same primordial sound, took in air, and gave himself a brief rest.

After he had had his fill, his feet on the mushy sand, he started walking toward the shore. I remained by his side as Nancy went off with the others.

He showed no exhaustion from his swim, but it was unclear if he could walk back up the sloping field to the house. I asked him if wanted me to get the car, but he said “No, I can walk.” And he did, without shoes, me holding his hand for part of the way. At some point he pulled his hand from mine, not wanting or needing the support, and without showing any exertion, walked to the house.

Later, when sitting on the porch with our friends, they complimented his swimming. He brushed it off as “Not much of a swim,” having a sense of who, and what, he used to be and do.

When we were home I asked him, “Dad, how did you like the swim?”

As expected, he had no recollection at all. I knew that, so why ask? Was it only for me to see if something stuck in him, so together we might enjoy the brief memory of only a short time past? Maybe it would be different this time and he would remember.

Not to him. With Buddha mind, aware only of the moment and with almost no awareness of self, there was the at-peace sea animal who experienced the brief stint as a gentle, caring, non-violent, human being. 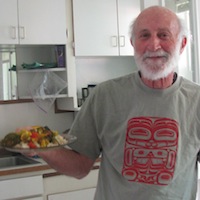