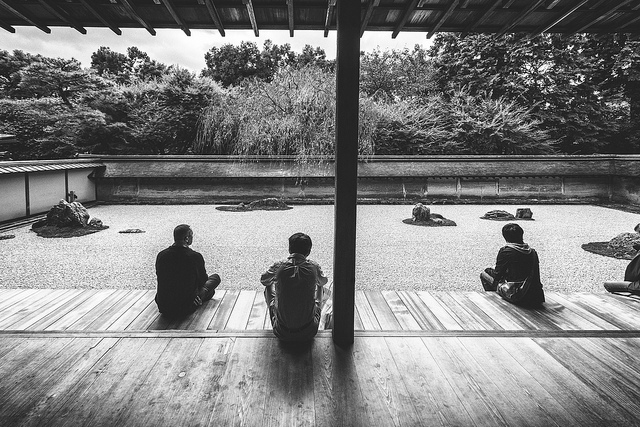 I felt a light touch on one shoulder and turned to see an older man in a monk’s robe smiling gently down at me. I rose to my feet and bowed. He spoke in heavily accented English: “I am Kanzaki Roshi. I understand you have letter for me?”

I introduced myself and, in the Japanese custom, handed him the letter with both hands, then bowed. He took the letter in a similar manner, then opened it. I saw, through the paper, that it was a short letter, one that couldn’t have taken more than a few seconds to read. But the roshi gazed at the words for more than a minute.

When he looked at me again, I saw that his eyes were moist. “Would you join me for tea?”

A few minutes later, we each knelt at a low table as a kimono-clad woman appeared with the elements of matcha, the pungent green tea. She poured steaming water onto the green powder and mixed it rapidly with a whisk. Before taking a sip, I copied the roshi’s movements as best I could, turning and admiring the cup, a ritual characteristic of the mindful approach of Zen, bred of long meditation practice.

When we’d finished, the roshi asked me how I came to possess the letter and what had led me to deliver it. I explained as simply as I could. When I finished, he bowed again. “Thank you for going to the trouble.”

“It was no trouble at all,” I said. I wanted to know more, but I didn’t want to offend him by asking.

Sensing my question, he said, “Her name was Aka Tohiroshina. She worked part-time here as an attendant. I did my best to counsel and guide her. Not well enough, it seems.” He took out the letter and translated it for me.

I’m sorry for taking my life. As you know, it has been a long struggle. I didn’t mail this letter in case I changed my mind. I don’t expect that it will ever reach you. If by some chance it does, please don’t attempt to retrieve my body. I don’t wish to cause more troubles. It would be a great service if you could convey my apologies to my mother, who did her best. I thank you for your guidance and care. You made my life more peaceful for a time.

When he finished reading, we rested in silence for a time.

It seemed as if both this young woman and the elder aikido master I’d learned of earlier had succumbed to the demon of depression. I recalled an acquaintance in the San Francisco Bay Area also afflicted with depression, who had, on impulse, leapt from the Golden Gate Bridge, only to become one of the rare few who survived. The fall broke his pelvis and both legs and caused other internal injuries.

Several years later, after he’d completely recovered, he revealed that a moment after he committed himself to the air, as he plummeted down for those long seconds, weightless, in a numb and disoriented state of suspension, he changed his mind: He wanted to live. How many others had also changed their minds on the way down?

Kanzaki Roshi invited me to walk in the garden with him.

He asked about my presence in Japan, and I explained my interest in practices such as Zen and the martial arts. “I’ve read enough to understand that the heart of Zen is zazen meditation and koan practice leading to direct insight. And I’ve done a little practice,” I told him. He waited for me to continue, so I added, with a smile, “I know too much; I’ve realized too little.”

The roshi seemed so receptive that I found myself sharing my deepest thoughts and concerns: “I’ve done much introspection,” I said, “yet my life feels like an unsolved koan. I’ve been fortunate to have studied with a master whom I call Socrates, after the Greek sage. But I remain restless…” Now I was babbling again. After a pause, I chose my words more carefully, “I hope to gain insight to complement my beginner’s understanding.”

As we walked, I noticed how the red-and-green maple trees leaned gracefully over the pond and the path of stepping stones surrounded by freshly raked gravel. As nearby gardeners in their two-toed shoes raked the path and trimmed the foliage, the roshi said, “Japanese gardeners do not create beauty but merely honor it and cultivate it. Like a wood sculptor who cuts away anything that isn’t needed for the final shape, landscape artists remove the extraneous—in the trees and in themselves.”

Kanzaki Roshi gestured again toward the moss-covered stones, roots, and water. Pointing to one of the trees, he said, “To the Japanese people, plum is the brave heart, the first tree to blossom after winter’s chill.” He directed my attention to a small green grove to our right. “Bamboo, with its uprightness, represents honesty.” As we walked past the carefully raked area—a sea of sand that held small stone islands and, atop them, small pines pruned in the bonsai style—he added, “We draw inspiration from the pine tree because, steadfast in all seasons, unchanging in shape or color, it evokes strength and constancy.”

I told him, “Near the entrance I noticed the branches of a pine tree decorated with many small pieces of white paper, hanging like tiny fruit, with writing on them.”

“But isn’t this a Buddhist temple?”

He smiled and shrugged. “Shinto is interwoven into the roots of the earth and of Japanese life. One Shinto belief says that oni, bad spirits, gather where dust and dirt accumulate. That’s why, for so many Japanese, cleanliness is, as you say, next to godliness. The Shinto religion has 10,000 gods—another way to say that Spirit is everywhere. But students of Zen avoid such abstract ideas, preferring the immediacy of each moment.”

“It seems that both Shinto and Zen are so interwoven into Japanese culture that it’s difficult for an outsider like me to separate them.”

“They do blend somewhat,” he said, intertwining the fingers of his two hands. “Yet they are distinct. Shinto, or Way of the Gods, is Japan’s indigenous religion and dates back to ancient history. It draws on beliefs in kami, or spirit deities of nature, and involves purification rites to atone for wrong deeds and find spiritual balance. Most Japanese practice or honor Shinto in their own way.”

“Zen came more recently to Japan, evolving from the Chinese Buddhism known as Chan, based on the Buddha’s Four Noble Truths and Eightfold Path to attain enlightenment and transcend the cycles of life and death and rebirth and suffering. While Buddhism emphasizes study of the sutras and rituals, Zen, as you understand, has a direct approach to enlightenment through the practice of zazen and koan work with an experienced teacher to gain insight that may lead to gradual or to sudden enlightenment. While Shinto is traditional and communal, Zen has a simple, individual focus, dependent on the practitioner’s own sincere effort and practice.”

“In the words of Master Takeda Shingen: ‘Zen has no secrets other than seriously thinking about birth-and-death.’”

After my recent experiences, these words struck at the heart of my search.

Here is an excerpt of the audio book, as well: