The 6 Greatest People You See at the Gym. 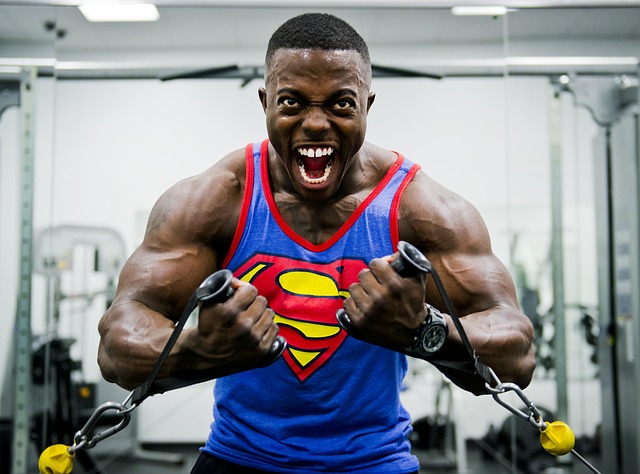 Depending on who you are, the gym can be a very fun place.

Some people see it as a house of torture, and some as a playground for adults, but there is one thing about it that I always find myself enjoying: the people.

The gym is a place where people can simply be ridiculous if they want to be, because let’s face it, whether you love the gym or hate it, you’re there to pick up heavy things over and over again until you think you look better, or to run in place until you’re little more than a sweaty mess of a human being.

So to celebrate the awesome things that either endorphins or exhaustion allows us to do in public, I’m going to count down the six greatest people that I tend to see at the gym (in no particular order—you’re all superstars here).

Variations of the grunters would be squeakers (people like me, who sound oddly like someone let the air out of a balloon when their weights get too heavy) and people who mutter some sort of exclamation, usually a swear word, after finishing a set.

Usually, these are people who have their earphones in, their music loud, and they are really, really feeling it. These are happy people, singing along to their happy songs, or they’re pumped up workout junkies whose adrenaline is high—and their music is a part of that high. And as they work out, even if it’s ever so slightly, they’re singing along to their Spotify playlist.

And you know what—you go, singers. Belt your little hearts out, because it really seems like you’re enjoying your workout, and that’s awesome. And besides, everyone deserves to be serenaded during their sets, especially if they’ve forgotten their own music at home. Thank you for your service, singers.

3) People who throw their weights on the floor.

I typically see guys doing this at the gym, although I’m sure it’s not exclusively a male thing. But it’s always some big, muscular dude, doing his bicep curls or something (maybe providing us with his services as a grunter as well), and then when he finishes with his set, he is done. He just drops those weights brutally, and then turns and walks off, leaving them to lie there and wonder what happened. Were they just dumped? Did he ever really care? Will they be put back in the rack to be lifted again? Who knows, all that’s clear is that this guy is done.

4) People who wear whatever they want.

So, I don’t know if you’ve noticed this, but there does seem to be something of a dress code to the gym, and a lot of it seems to be based on how fit you are. If you’re really fit, you tend to wear clothes that show off your body a bit more, but if you aren’t very fit quite yet—maybe you just started at the gym, or maybe you’re body just isn’t made to be thin or muscular, or maybe those simply aren’t your goals—you tend to wear clothes that cover you up a bit more. And that’s all well and good, wear what makes you comfortable, but I have to admit that it’s awesome when you see people who shake things up a bit more.

Let’s face it, going to the gym to get super sweaty in the middle of summer can suck, especially if there’s no air conditioning and you’ve delegated yourself to covering up. And often times, such people who are covering themselves up are not doing it just because they want to, but because they’re self-conscious when there’s nothing to feel self-conscious about! You look beautiful, so screw the dress code! Wear what you want!

This one, I blame on the fact that there are so many mirrors everywhere. Because you’re there to work out, your muscles are all pumped up and—Oh! I didn’t realize that my shoulders were that toned! Next thing you know, you’re posing in the mirror, checking out your biceps, your triceps, your butt muscles, realizing just now that all that hard work you put in has paid off. And good for you!

These ones are similar to the posers, but different enough to earn their own spot on the list. Like posers, they’ve just realized how much their hard work is paying off, but unlike the posers, they aren’t satisfied with being the only one to realize this. They want everyone to know, but at the same time, they want to be discreet about it. So they sneak out the cell phone, either on the floor or in the changing room, and they snap a quick shot in the mirror so that they can later post it online with a caption like, “I’ve worked so hard for this body, and I’m so glad that it’s finally paying off.” Or, “no pain, no gain.” You know, something like that.

And now that I have counted down six of the best people at the gym, now it’s your turn! This isn’t a complete list; it’s just a start, because there are so many awesome people everywhere! So tell me, what awesome people do you like to see when you go to the gym?