My Ring Tattoo Reminds Me of something Way Better than my Ex-Husband. 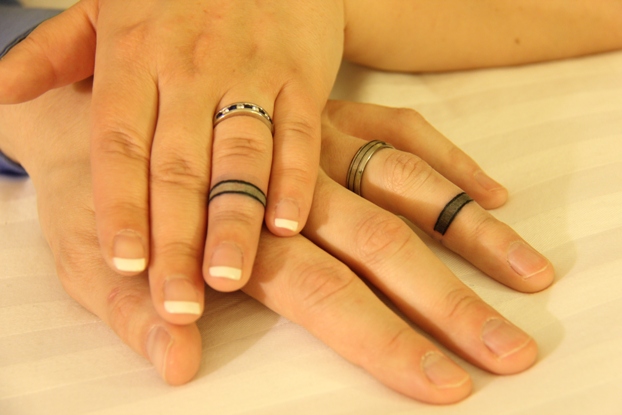 My co-worker (at the time) looked pointedly at my freshly tattooed ring finger.

In the back of my mind, I knew he was absolutely right. In fact, until I had met my husband, I was determined to remain unmarried for life. I slapped a fake smile on my face, though, and stubbornly told my co-worker that being married, for me, was serious business.

I had committed, and I was going to stay married. He was “the one.”

Go ahead, roll your eyes. I’m rolling mine too, let me tell you.

The trouble with life is that—what is the saying? Something about happening while we’re busy making plans. My marriage wasn’t one of the shortest in all of history, but short enough. Obviously, it would be in poor taste to air my dirty laundry and say why—less than two years after our wedding—we were getting a divorce. So, use your imagination. It was an emotional kick in the head, heart, and spirit, and that’s all I’ll say.

I had proposed to him on the top of a mountain during a trip to Kelowna, British Columbia, with shaking hands and wet eyes. The whole thing was a surprise—I’d planned for us to elope that same weekend and had made the arrangements. I was confident he would say yes, and he did. The next day, we had ring tattoos done and the day after that, we were wed in the mountains at sunset—just the two of us, a marriage commissioner, and his wife as the witness.

It was meant to be romantic and spontaneous, and we both agreed that we’d only follow through if we felt sure, and not pressured. We’d discussed the topic often—and a legal paper wasn’t really going to change our relationship; our lives were already so entwined.

But looking back, I realize my proposal was done half out of love and half out of desperation. Things were already rocky and I believed that a fresh start and a fresh commitment would help set us on a better course. I do this with diets and New Year’s resolutions all the time with dismal results—I should have known better. But no, I was sure that with the signing of a legal paper and a kiss, we would be more invested in loving and caring for each other, in building our lives together.

And I was committed. I envisioned us 40 years later, as old and wrinkly as my beloved grandparents—still married, still caring for each other, true partners in life.

I clung to this relationship and my ideals and was taught a hard lesson: there is no control. There are no guarantees. There’s only right here, right now, this moment.

And it’s because of this funky thing called impermanence.

Now, I won’t pretend to know about many Buddhist things. Despite my enthusiasm for the teachings, I’m pretty much at a kindergarten level. But, as far as I understand it, the point is that everything changes. And if we base our happiness on things we have (otherwise known as clinging)—like a relationship with someone—it will inevitably lead to suffering when those things end. Instead, we need to acknowledge that nothing in life is permanent, and practice non-attachment and living in the present moment.

This isn’t going to stop us from feeling terrible when terrible things happen. But honestly, it helped me move on. It helped me have compassion for myself, him, and the situation in the moments I needed it most. It also gave me hope for future love and offered a fundamental change to how I view all of my relationships—romantic or otherwise.

For the rest of my life, I’m going to have this tattooed reminder on my finger of just how impermanent things can be—situations, careers, material things, love affairs, and even life itself. I’m not embarrassed by the tattoo. It’s part of my story, and I still like the simplicity and elegance of it. I’ve considered getting a matching one on the other ring finger. Mostly, though, it’s a permanent and personal reminder that everything changes. And to appreciate where I’m at here, right now. Whether I’m having a hard time or good time, as the Greek philosopher Heraclitus says: “Change is the only constant in life.”

I’d like to say something flowery and inspiring about embracing change and making the most of it because everyone loves that kind of sh*t (and I probably have said similar things before—even my opinions are impermanent because hey, we grow as people, right?)—but here’s something we can probably all agree on:

Change is hard and it often sucks.

Whether it’s forced on us unexpectedly or something we’re striving for, it’s probably going to make us cry and struggle and work long and hard at regaining our balance. But we do grow, learn, and evolve. And then we change again.

As long as I am alive, this is the one truth that I will hold most often in mind—thanks to my tattoo reminder. Which, by the way, isn’t truly permanent either. I’m an avid camper. I might lose a finger to an axe or something. You never know.

Anyway, the benefit of impermanence is this:

It makes getting through the hard parts much easier to bear, and allows us to make room to enjoy the good stuff.