How to Stop Society from Ruling your Life. 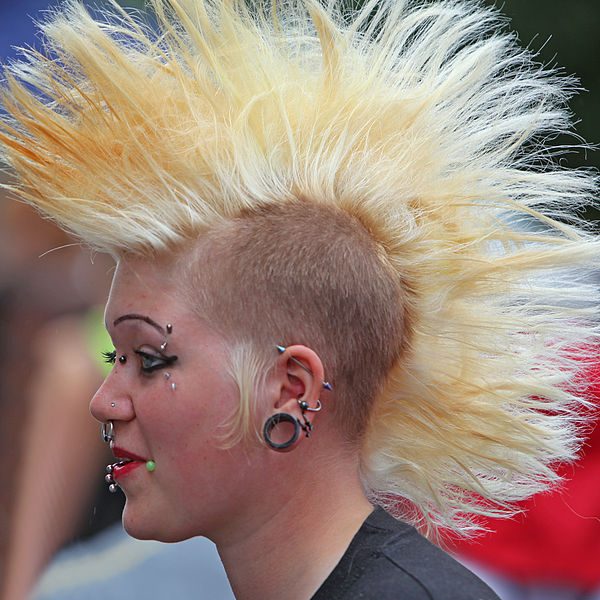 There’s this issue in society that I’ve seen come up again and again, and I’ve seen it in multiple forms.

When I was in high school, I would always answer the question, “What do you want to be when you grow up?” with, “I want to be a writer.”

Most teachers would respond, “Oh, that’s not a practical job…you can’t make much money with that. Why don’t you do something else—you could be a teacher instead.”

The other day, when I was at the gym, I met a woman in her 50s who was enthusing over another woman’s bright red and orange dreadlocks. She mentioned that she had recently gone to the hairdresser asking for a funky haircut herself, to which the hairdresser responded, “Oh, you’re much too old for that. I wouldn’t do that to you.”

I recently read an article about a girl who described herself as “fat.” She stated that when she went to the beach in her bikini, she was spotted by a woman who said to her, “You’re much too big for that bikini, I don’t want to see that. Why don’t you wear something that covers you up a bit more?”

And, I recently watched a video posted on ELLE Magazine’s Facebook page discussing an eight-year-old boy who enjoyed dressing up and performing as a drag queen. In this video, he mentioned that he knew other kids who would go to their parents saying that they wanted to be drag queens too, to which their parents would respond, “You’re too young to even know what that is.”

Now, there’s a lot going on in all of these examples, but the common theme that I notice—the thing that really gets under my skin—is this idea of telling other people who they can and can’t be and the acceptable ways of expressing themselves (based off of their own limited understanding of who they are and what they are capable of).

And this happens so often, and in so many different ways. In the aforementioned examples, we see at least three different types of discrimination as well.

In the example of the woman in her 50s wanting to get a funky haircut, we see a prime example of ageism—discrimination against someone based on their age. The woman was deemed to be “too old” to look good with a funky hairstyle, and so the hairdresser refused to give it to her. But, when it really comes down to it, why?

Why wouldn’t she look good with a funky hairstyle? And more than that, who is the hairdresser to judge if she would or would not? If the woman in question wants to express herself in that way, and if it would make her feel more comfortable in her own skin, then what is so wrong with it?

But we, as a society, have a very basic understanding of what someone in that age group “should” be—they “should” be humble, quiet, non-offensive, ready to wind down, and ready to start taking things slowly. And so when someone comes along to challenge all that, we don’t like it. We tell them that they can’t do that. Which is really unfair, because it limits the way they get to express themselves and find comfort in their own skin.

In the example of the larger woman in a bikini, we see one of the most classic examples of fat shaming. I don’t know a whole lot about the woman in her bikini. I don’t know if she felt like she was rocking the bikini or if she was already a little self-conscious about it, but the one thing I do know is that she did not deserve to be told that she shouldn’t wear it.

Because she should. If she wants to put her body in a bikini, then she should put that body in a bikini, and she should have the opportunity to go out and look fabulous and be her beautiful self. Her body and her bikini were not the problems here. The problem was the other woman’s limited idea of what beauty is. She decided (because she was told by society) that only thin women look good in bikinis, and therefore, only thin women “should” wear bikinis. Larger women “should” spend their lives enrobed by the shameful one-piece, forever going to the beach in frumpy T-shirts and acceptably covering shorts.

And lastly, in the example of the children who wanted to dress in drag, we see an example of sexism and homophobia. A lot of people see gender as a two-way street: you are either male or female. And especially when it comes to children, a lot of parents fear that deviating from that two-way street will result in their children becoming “other.”

Their sons will grow up gay, their daughters will grow up confused, cats will live with dogs, havoc will erupt upon the city, and—dear god—will someone please think of the children!

There are two major problems with this thinking:

>> This sort of thinking hinges on the belief that being LGBT+ is wrong and must, therefore, be avoided.

Children must give a limited, very prescribed performance of gender—or else they risk becoming queer. But even if they did, what would be wrong with that?

>> They internalize these opinions about themselves—that they are wrong and they are dirty, because they are LGBT+.

We associate being gay, lesbian, bisexual, transgender, gender-queer, drag queen, and so on as being an “adult thing,” but most everyone who falls under these categories as an adult can tell you that it started somewhere in their childhood—or that they knew it all along.

So, if this is the case, and if children most certainly can be something other than straight or cis-gendered, then why do we force them to act otherwise?

One of our society’s many problems is that we are constantly limiting one another. We see each other in basic, simple ways, and then we act accordingly: a person is either fat, thin, young, old, child, woman, man, this, or that. And when they start to step outside of those lines, to challenge our ways of seeing them, we tell them, “Oh, no, no. Don’t you do that. Get back into that line where you belong!”

But that isn’t how things works. People are more than the labels we give them, and they should be allowed to express themselves in any way that they see fit.

If you’re 400 pounds of pure awesome and you want to wear your stylish new bikini to the beach, then please be the most beautiful, confident person there!

If you want to dress in drag, or express your gender in a way that is perceived as unconventional, then you will look all the better for it because you will be expressing who you truly are—and nothing is more beautiful than that!

And—to go back to the example of me wanting to be a writer—if you have a dream that other people tell you is unrealistic, but you still need to pursue it, then pursue it for all it’s worth. Trust me, it will make your life so much more fulfilling.

Don’t ever let someone else live your life for you. You are amazing, and you are so incredibly strong and capable. So even if you do face the occasional doubter or nay-sayer, just remember that they’re speaking from a limited understanding and they don’t know you.

You know you, and at the end of the day, you are the only person who has to be satisfied with your life.