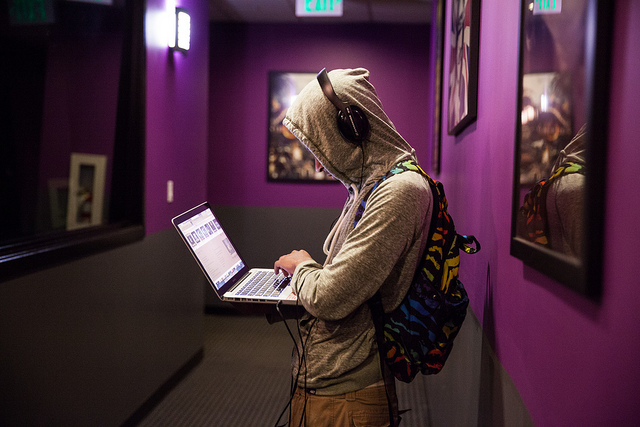 Today is a somewhat exciting day for me.

Today is the first year anniversary of starting my online blog. Woot! Woot!

It’s strange. Maintaining this blog has been such a huge part of my daily life that it feels a little like it’s always been there, while simultaneously feeling incredibly new, something I’m still getting the hang of. And, it still has a long way to grow from here.

But, at the end of the day, it has been a rewarding experience, one I’m happy I took up.

And, although I’ve only been at it for a year (which, while I’m celebrating the impressiveness of that, I’m perfectly aware isn’t a long time in the grand scheme of things), there are quite a few things I’ve learned over the course of this year. Lessons that have become ingrained in who I am as a person and how I view the world.

Lessons I wouldn’t trade for anything because I needed to learn them and, for me, this was the best way to learn.

So, without further ado, here they are: the top three lessons that I have learned by maintaining an online blog:

Whatever you’re going through, no matter what it is, you are not alone.

Before starting my blog, I had been dealing with a lot of mental health issues, primarily depression, anxiety, and suicidal thoughts. I talked about these issues a little bit—mostly with my mom—but I never really spoke to anyone else about it (besides one drunken announcement that I made to a friend that we shall not speak about).

Mostly, this was because I was embarrassed.

When I started my blog, however, I went in with one rule that I told myself I could not break: everything I wrote needed to be honest.

It didn’t matter if that honesty made me look bad. When it came to writing, there were so many writers that I admired because they didn’t care how they looked. They just wanted to reflect their authentic experience, and I wanted to be that.

So, for the first time in my life—I was honest.

I wrote a piece on suicidal thoughts, and I had a man send me a private message about how he had considered killing himself after he got out of an abusive relationship.

I wrote a piece on depression, and I had another man thank me, because he had spent his whole life feeling a certain way and was afraid to tell anyone about it.

And, to branch outside of issues of mental health, I wrote another piece on feeling confused about my sexual orientation, and a married woman confessed to me that she really saw herself in what I wrote, and she was happy to see it put into words.

You know what this made me realize? I’m not alone. None of us are alone.

We are all messy, confused, broken human beings, and we think we need to shoulder this burden ourselves, but we don’t. We are all struggling, and once you speak out about the struggle, you find that out.

Everyone has a story to tell

This lesson sort of branches off of lesson number one.

You know those people I spoke of, the ones who reached out to me and told me I wasn’t alone? Some of those people were complete strangers to me beforehand. I’m not even talking general acquaintances. I’m talking about never-met-them-before, not-even-sure-we-live-in-the-same-country strangers. You know, the sort you “meet” on the internet all the time.

I suppose that, because they felt they knew something about me, they felt more comfortable coming forward and telling me more about themselves. Sometimes, more than I’ve learned after years of friendship with other people.

I heard a story about a man who was trying his best to keep going, despite his recent divorce. But, he was getting tired and beginning to accept that maybe the best thing he could do for himself was to admit he wasn’t okay.

Hearing these stories, allowing people to open up to you so much, allows you to realize that we are all much more complex than we imagine. We are so quick to dismiss someone as “stupid” if they do something that annoys us, “wrong” if they say something that offends us. But, every single person in this world has a story to tell and a life that they’ve lived.

“If you knew everyone’s story, you would love them.” ~ Emma Stone

Sometimes, you’ve just got to do the thing that scares you, especially if it’s your dream

So, I’m not gonna lie, as much as I’ve spoken highly about this blog business, I didn’t always feel that way. In fact, when I first started, I was downright petrified.

Well, because it’s scary, that’s why! I’d been writing for a long time before this. I’d decided I wanted a career as a writer when I was about 10 years old, and even before that, I’d been writing. It’s just part of me. It’s what I do, as natural as the sun rising.

And, putting my writing out there to be judged and critiqued by everybody is a goddamn worry, okay?

But, I did it. Like ripping off a band-aid, I just did it. It wasn’t as bad as I thought it would be.

Not everyone liked everything I wrote. But, I always found comfort in one of three thoughts, depending on what the post in question was:

Firstly, I stood up for what I believed in, and realised that not everyone is going to agree with everything I believe in. Secondly, I reflected my honest experience. And thirdly, if this post really, really sucked and there was nothing redeemable about it, I could write another tomorrow.

Despite my fears, misgivings, and worries, this experience has been nothing but rewarding for me.

So, if there is something you want to do, whatever that might be, something that you’ve really been dreaming of but have been too afraid to try—starting an Etsy store, applying for that job, taking that program—I say do it. The worst thing that can happen is: you fail. And then, you try again tomorrow.

The hardest part is persistence.

It can be difficult to find resilience when people put you down. Sure, I get that. But, just do what I do whenever I seriously fail at something: cry for a bit, stuff some junk food in your face (we’re all allowed our cheat meals from time to time), wipe away the tears and the smeared make-up, and then get right back up and do it again.

This is just the beginning.