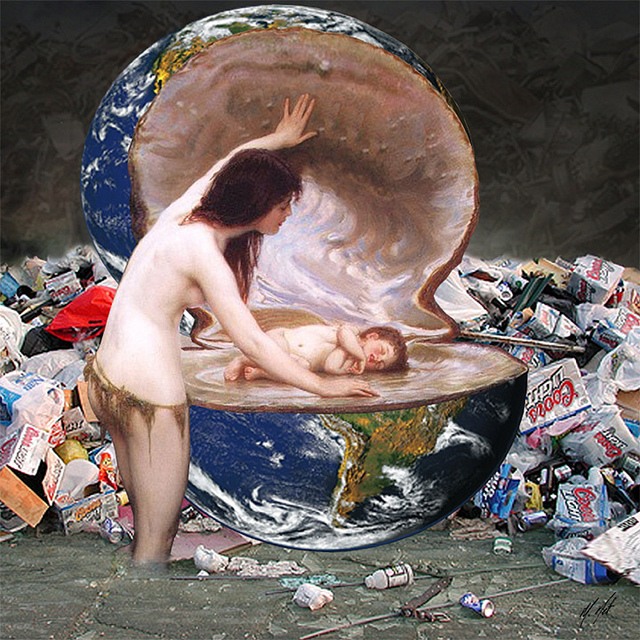 I had just fallen asleep when the Earth shook.

An 8.0 magnitude earthquake had hit the coastline of southern Mexico, and we felt it here at Lake Atitlán in the Guatemalan highlands. My husband and I jumped out of bed, and looked at each other like deer in headlights.

This one lasted longer than most but, due to my half-asleep state, I didn’t register anxiety as much as curiosity. Our daughter continued sleeping soundly, so we stayed in the bedroom of our tiny two-story cabin and moved with the Earth. Finally, it did cease and no aftershocks came.

I wonder, what will it take for us, as humans who live on Earth, to care for our planet?

I wonder if it is even possible to reverse the course we are already so far gone on? (Jane Goodall says we can.)

I live on a beautiful lake which should absolutely be a World Heritage Site, protected, a national park, or a trash-free zone—something. Anything.

This lake appears to be gorgeous and healthy from a distance. There are three mammoth volcanoes looming over its southern shore. I am blessed with a view of the lake and volcanoes from the balcony where I write.

Now, there are so many places around the world experiencing floods, forest fires, rising temperatures, extreme weather. Climate change.

From the outside, the lake looks pristine. Its clarity is better than in the recent past, especially those times over the past decade that brought major algae blooms—a thick film of greenish yellow cyanobacteria that eventually turned blue and purple and brown, stinking as it decayed.

The lake may look clean, but it is not. This is a lake that was formed by a volcanic crater many millions of years ago, and has no rivers going out to the ocean. The rivers feeding into the lake contain chemical runoff from the farms now monocropping corn instead of growing diverse vegetables, grains, and fruits as they used to. From untreated or poorly treated sewage from the dozens of villages around the lake basin. From many tons of trash: plastic, styrofoam, rubber, more plastic.

Hence, unless drastic action is taken by the communities and individuals around the lake, as well as the Guatemalan government to outlaw both littering and contamination of the lake at the corporate level, this beautiful gem of nature has a death sentence. No one knows for sure. Maybe seven years. Maybe 20.

Isn’t the same true of the entire planet?

She appears to be okay, if you’re not in an area ravaged by natural disaster or an “underdeveloped” nation with trash lining even the most remote rural trails. Some people can even deny the reality of climate change still, because they haven’t witnessed firsthand a heat wave or the rising ocean reducing the shoreline.

How long does the Earth have left to live if we don’t change our ways?

I don’t have the answer. And I feel helpless against the vast, greedy corporate/government misuse of funds and desecration of the environment. I can only change my own behavior and try to influence those around me.

I stumbled upon this infographic the other day. It has cemented my decision to have only one child and renewed my commitment to vegetarianism—a plant-based diet. This is not to say I will never ever eat dairy or meat, but I plan to not be lax about it, even when visiting Texas over the next few months. Delicious, nutritious vegetarian/vegan options are always available. Mindful eating is a choice: plant-based, smaller quantities, slow eating, appreciation of the food, its ingredients, cook, server. It is all a choice.

I feel good about not having a car. A vehicle is a luxury and a freedom. I enjoy driving, going places, road trips. However, not having one is, according to this study, one of the best ways to positively impact the planet.

May we wake up and start caring more for ourselves, our fellow humans, and our Mother Earth.

May our daily actions and practices serve to benefit all beings and our precious planet!

What we can do about Eco-Grief Every Single Day.