The Garden of Eden was Vegan. So Why do Christians Believe God wanted us to Eat Animals? 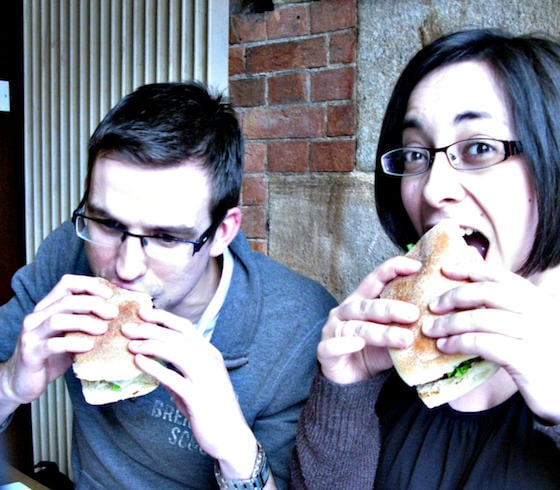 In the Garden of Eden, all creatures, great and small, co-existed peacefully together.

This is what the Bible says.

Yet in the global “garden” we’ve now come to inhabit, there is little peace for many animals, particularly those who are born and raised on factory farms. Factory farming provides us with the majority of our meat, eggs, and dairy, but it also results in the deaths of 56 billion animals a year—simply for human consumption.

The Bible explains God’s original will in Genesis 1:29-30:

“Then God said, ‘I give you every seed-bearing plant on the face of the whole earth and every tree that has fruit with seed in it. They will be yours for food. And to all the beasts of the earth and all the birds in the sky and all the creatures that move along the ground—everything that has the breath of life in it—I give every green plant for food.’”

This offers insight into God’s intention for living creatures on Earth to follow a plant-based diet.

Additionally, Isaiah 11: 6-9 provides evidence to the argument that God hoped for an equal and compassionate co-existence, stating:

“The wolf will live with the lamb, the leopard will lie down with the goat, the calf, and the lion, and the yearling together…The cow will feed with the bear, their young will lie down together, and the lion will eat straw like the ox. The infant will play near the cobra’s den, the young child will put its hand into the viper’s nest. They will neither harm nor destroy on my holy mountain, for the earth will be filled with the knowledge of the Lord as the waters cover the sea.”

And yet, we are currently enacting extensive harm—not only to sentient living creatures, but also to our planet.

Many Christians may counteract these points by determinedly pointing out that the Bible condones the consumption of meat—and it’s true, in some instances, the consumption of meat is specifically addressed. But I’ve heard some go as far to argue that the Bible commands us to eat meat, which is simply untrue. It’s also important to remember that it was written many years ago, long before the introduction of barbaric factory-farming practices, and well before supermarkets were well-stocked with cruelty-free and meatless alternatives.

It is also worth highlighting that when God declared that man was free to eat animals in Genesis 9:2-3, it was during the time of Noah’s Ark and the great flood, and therefore a period of extreme desperation for both animals and mankind.

Throughout the Bible, there isn’t much further insight into whether God hoped man (and all creatures) would return to a plant-based diet once there was no longer a need to devour one another’s flesh. However, whether God intended for this or not, we all have the gift of discernment and rational judgment, and can each make moral decisions based on the state of our current surroundings—without the prompting from a higher source.

Ironically, many Christians claim they are free to consume the meat of animals because the Bible permits it, yet at the same time, I’ve heard many declare that they enjoy eating bacon despite the Bible’s forbidding of it. (The Old Testament Leviticus 11:7-8 states, “And the pig, because it parts the hoof and is cloven-footed but does not chew the cud, is unclean to you. You shall not eat any of their flesh, and you shall not touch their carcasses; they are unclean to you.”)

Interestingly, the Bible also makes comparisons between killing or harming other creatures in Isaiah 66:3 “He who slaughters an ox is like one who kills a man; he who sacrifices a lamb, like one who breaks a dog’s neck; he who presents a grain offering, like one who offers pig’s blood; he who makes a memorial offering of frankincense, like one who blesses an idol. These have chosen their own ways, and their soul delights in their abominations.”

Ultimately, it is personal choice as to whether we consume animals knowing the systematic abuse, suffering, and cruelty that is widespread in factory farming. The Bible even explains that it is not our place to judge one another based on the dietary decisions we make, as stated in Romans 14:3 “The man who eats everything must not look down on him who does not, and the man who does not eat everything must not condemn the man who does, for God has accepted him.”

This, however, can be difficult—for just as each human has the right to their own food choices, so too do animals have the right to a life free from captivity, pain, and suffering. It is particularly difficult when there are so many differing views on what is acceptable to eat. For example, the majority of Westerners are horrified at the idea of eating dogs, declaring it barbaric, but for many Chinese and other Asian countries, dogs are part of some traditional and native dishes. And then for most of those who do not consume any animals at all, a dog, pig, chicken, cow, or fish are all viewed equally, such that eating a lamb is just as barbaric as eating a puppy.

I try not to personally judge anyone for their food choices, as I am aware that much of what we eat is largely due to culture, combined with more general parental and social conditioning. That being said, I do ponder why anyone would choose to knowingly support the abuse and murder of billions of animals when, collectively, all it would take is making more humane alternative choices to eliminate the suffering and co-exist with compassion and without cruelty, as I believe was God’s intention.