Genocide is Being Globalized on Social Media. 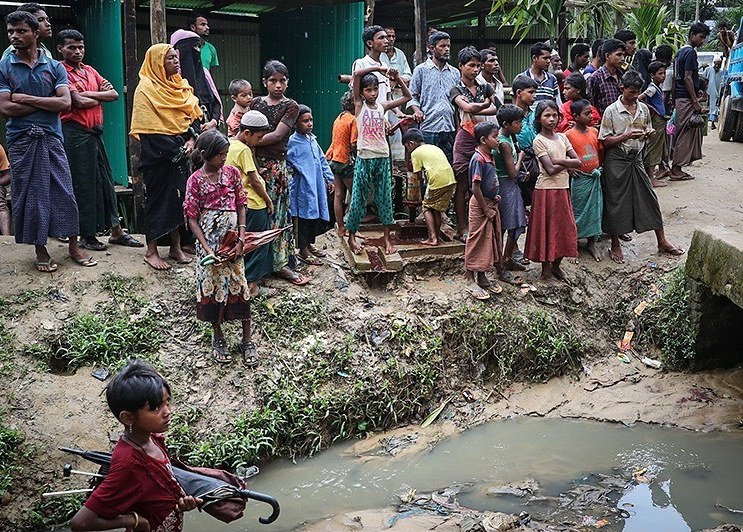 If you think seeing is believing, you can peruse videos of Rohingya children being whipped as they stand in line waiting for food and Burmese undertakers walking through rows of countless bodies burnt to a crisp.

If you are more apt to trust the research, you can peruse the endless testimonies compiled by groups like Amnesty and Human Rights Watch. Their reports tell of women being raped while the men are killed, hundreds of villages being burnt to the ground, an exodus of 600,000 Rohingya fleeing to refugee camps in Bangladesh, and hundreds of thousands of the people in those camps now starving.

If you doubt the intent of the killers, you can simply look at what they have to say on the comment sections of mainstream news sites, where they have largely taken over. There they will tell you the women deserve to be raped, the refugee children look like pigs, and all Muslims should be killed. They post laughing emojis in response to articles on women being gang raped, and they mock the people who plea for their humanity.

They are enabled by conservative Americans who support and share their views. The political affiliations of these Americans can be discerned by simply looking at their Facebook profiles. They are also enabled by Indians, who elected a prime minister a few years ago who, prior to the election, was principally known outside of India for having said nothing when mobs in the state where he was governor killed a couple thousand Muslims in a few days.

Their principle argument is that because the Rohingya had a militia, which killed 30 police officers just prior to the start of the genocide, they are terrorists and got what they deserved. Never mind the fact that human rights organizations had been reporting similar crimes against the Rohingya long before they had a militia; never mind the fact that ethnically cleansing over half-a-million people because a tiny, rogue portion of them attacked the police in retaliation borders on the sociopathic.

They also argue that there is no proof of the genocide. This sort of denial is typical when genocides first break out. But this time we have the photos of hacked up bodies, the videos of burning villages, the reports from human rights organizations, and the testimony of journalists. However, few people can imagine what actually takes place in a genocide, so when the perpetrators of genocide deny it is taking place, they actually gain an audience through the sheer insanity of their murderousness. Nobody could be so brutal to incinerate a whole race of people, after all—but, of course, they could be and often are.

Many of these people look like paid trolls: their profiles are thin, their friend lists minuscule. But many simply look like they are there to enjoy the bloodsport, and others still that they are engaging in a war of civilizations. They actually blame the Muslims for being attacked, arguing that because bad stuff is always happening to them, they must be to blame. It is common to let such things slide when they are said about Muslims, but just imagine the outcry if we were to blame the Holocaust on the Jews.

It was only the most jittery of critics who worried that supporters of President Trump and the Indian Prime Minister Modi would go genocidal—but somehow, they found a way to get in on the action. They may not smell the flesh of their victims and hear the cracking of their skulls, but they are participating in a genocide nonetheless. They are our fathers and brothers, sisters and mothers. They are ordinary Americans helping provide cover for the mass murder of Muslims that another people wants to keep out of their country; and while they are providing cover, they can see for themselves just how hateful their new comrades really are.

It is similar to what has been happening in Syria, though there it is far more visceral. Young men with sociopathic tendencies from across the world have been joining ISIS so they might find a Yezidi “wife” they can rape on a regular basis. And young men from Iraq, Iran, and Lebanon have been joining militias to fight on the side of the Bashar al-Assad regime, which has now killed tens of thousands of prisoners, most of whom experienced severe and prolonged torture prior to their deaths. Now it appears that many American Trump supporters are beginning their own virtual globalized genocide.

These mobs are so unprecedented we have barely begun to call out their actions as genocidal. But a handful of specialists in the study of genocide have been arguing for decades now that on-the-ground research suggests people tend to engage in genocide not because they have been ordered to do so by authorities, but rather because they want to get in on the action. And what we are seeing today is ordinary people getting in on the killing from afar. The angry crowds that once carried out local programs against Jews in Eastern Europe are now forging globalized virtual hit squads.

We have globalized what economists might call the genocidal value chain. A global value chain is made up of the steps needed to bring products to market. It includes the production of parts in distant places, their coming together in a single location for assembly, and their final distribution to points of sale.

Genocides are now produced in much the same way. While they are spurred on by local leaders and hit squads, they are backed by supportive governments and social media trolls. The genocide against Syrian dissidents would not have been possible without leftist conspiracy theorists muddying the debate, peace activists shifting the narrative from human rights abuses to Western interference, and Russian trolls making up lies on social media.

News sites could shut down this activity by simply making it more difficult for trolls to get on their comment sections and by setting up their own internal regulations against incitement to violence against whole categories of people and group libel. The benefits would accrue not only to people in distant places but to their own most dedicated readers as well, who would reap the rewards of more reasonable discussion. But a more important step might involve simply calling it out for what it is, which is the aiding and abetting of genocide.

Somehow, we have normalized anti-social hate on social media. If we are to restore our humanity and reweave the fabric of our social lives, we would do well to consider the standards and norms we set for acceptable behavior and speech. A good place to start would be to cast support for genocide to the outer margins of social life.