What every Mama wants for Christmas. 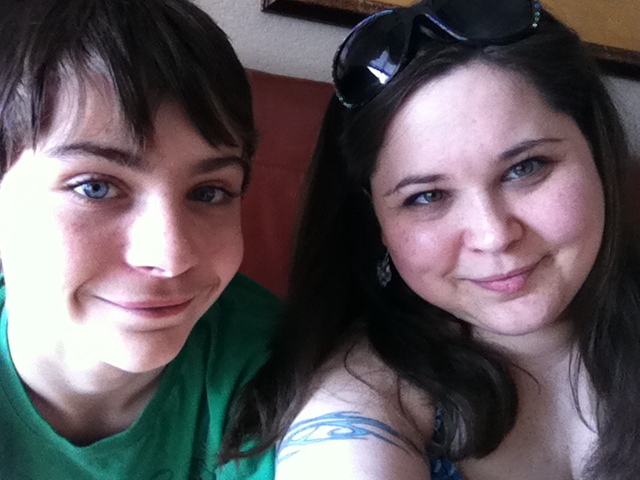 The answer to what every mother wants for Christmas is pretty obvious.

But it’s often not easy for me to say, especially if you’re like my family, who would rather resort to sarcastic, dry humor than get a little bit soft and mushy with our words.

My son asked me a couple of weeks ago what I’d like for Christmas, and then later, the name of my favorite greenhouse. Obviously, he plans to gift me something plant-related—which is perfect, since gardening is one of my major hobbies.

But he’s a fresh adult, having just turned 18 in November, and is in his first year of university. He works a little while he’s getting his education, with most of his earnings dedicated to his car, saving to pay back his student loans, and going out with his girlfriend. While I’m not able to pay for his tuition and books, he is welcome to live at home and have all his other expenses covered—as long as he’s in school.

It’s not the first time he’s attempted to give me a gift for Christmas. I’ve always maintained that handmade gifts are welcome, or even just a card, but buying something for me is off-limits. This year, he put his foot down and said he wasn’t taking no for an answer because he’s an adult now. Yes, he is a thoughtful, sweet guy. I want to take some of the blame for raising him to be that way, but it’s always been in his nature.

It’s weird to think that in just a few months, he’ll be as old as I was when I became pregnant with him. As a young, single mama, I barely had any independent adult time before the financial stresses piled on. I dropped out of my own university courses, and as soon as he was old enough to be in daycare, I was at work. Knowing what I know now, the last thing I want is for my children to worry about spending money at Christmas. In fact, I’m becoming less and less enthused with the whole gift-giving thing every year. So, I’d rather he didn’t spend his money.

What he doesn’t realize is that he’s been giving me the gift I want all year long.

I want him to tell me about his falling out with his friends while I stand at the stove making stir fry for dinner. I want him to text me some silly dad joke that he knows I’ll appreciate. I want him to keep thinking of me like he does every once in a while, and get me coffee in the morning—even though sometimes, he’ll bring it to me in bed, only to discover I was already up early and had left for the day. (And yes, I sure do reheat it and drink it when I get home.)

I want him to hang out with me on the couch for a few minutes, laughing at our dumb cat and the way our dog always looks kind of shocked. Because his laughter—it really is music to my ears. Even if he’s laughing at me, which also happens pretty often. When he’s walking around smiling about something, it instantly makes my day a little better, and I can’t help but smile too. And I hope he never stops doing the dorky things he does to make me laugh—like his weirdly accurate imitation of a tube man/air dancer that you see at car dealerships.

I’ll be grateful for every minute we argue about politics, and who should take the garbage out, and whether love is more important than money. And while he’s a stubborn young man and isn’t fond of unsolicited advice, he has a round-about way of asking for it anyway by talking out his frustrations with me—and what I want for Christmas for the rest of my life is for him to just keep doing that.

I want him to come around any time, just pop in unannounced, even if he raids my fridge, grabs the last soda, and gobbles up the last of the banana muffins. I want him to do this now, and when he’s 20, and 30, and 40. And if he becomes a father, to bring his kids around any time too, and they can raid my fridge too. I want this to always feel like home.

When he’s nervous about his job, I want him to come talk to me about it. Or when he fights with his wife. Or when he’s struggling with his health. I want him to ask me for help. Or for money. Or to dog-sit because he’s finally getting his butt out of Canada and traveling somewhere exciting. I want him to borrow my SUV because his car is too small to lug home the used furniture he bought for his first apartment. And I want him to know that just grabbing the keys from my purse and leaving me a note won’t land him in hot water.

What I want for Christmas every year is honestly, as cheesy as it sounds, for him to be happy and healthy and just to keep me in his life. Because I’ve spent 18 years—some of them struggling, but happily—to raise him to be a good, kind, honest, thoughtful, hard-working, joy-seeking kind of man. And I have the material things I need and want at this point in my life.

So mostly, I just want him to keep being my kiddo, and to let me keep being his mama a little, however way that morphs as we each grow older. I want to be his “home” away from home when he moves on.

I’m so proud of who he’s become so far, and also proud of the time and love and hardship I put into raising such an awesome guy, and I want the chance to sit back and admire how it all turned out. That is enough Christmas present for me.

If you, like me, aren’t great at saying these sweet, sappy things, and you have a child who needs to know how you really feel, share this. Or, maybe, you want to send it to your own mama because she’s been “home” for you, too.