5 Ways we can Make Peace with the Ex. 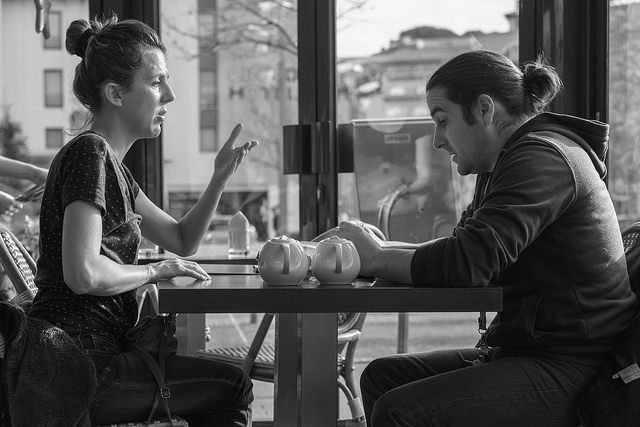 Like many people who have had a tumultuous breakup, I hated my ex at one time.

I used to get physically sick when I saw his name appear in my inbox or received a text message from him. When we had any interaction at all, my heart would race and my stomach would clench up the way it did as a kid when I got into trouble and my mother would spit out, ominously, “Wait until your father gets home.”

It was Easter Sunday and four glasses—including two smaller kid’s cups—clinked together for a toast across the table. It was the first holiday we had spent together since our little family split apart four years ago. The first occasion we both felt we could sit beside each other and actually have an authentic and genuine conversation about our lives rather than terse robotic exchanges about the logistics of the kid’s schedules.

Had you told either of us just a year before that we would ever have a meal together, let alone laugh at some of the things going on in our lives, we would have told you hell would freeze over before that happened. We just weren’t ready.

But in the past few months we decided to heal.

We decided to forgive.

We decided to work hard to repair the wreckage of our past so we could create a co-parenting relationship we’d both be proud of.

And that commitment—to forgiveness, to listening to each other, to owning our stuff, and to being willing to talk about the messy, painful things that led to our divorce—led to four clinking glasses and two children getting to spend their very first holiday with both of their parents.

No, we aren’t getting back together, nor do we want to.

What we wanted was peace. What we wanted was to get real closure and talk about what ended our marriage so we could both move on and be happy. We wanted our kids to grow up knowing their parents were friends and that they would never have to choose sides or feel uncomfortable when we’d all be together for an occasion, whether it be a soccer game, a gymnastics meet, or a high school graduation.

Most of us have at least one—if not a dozen—exes we’ve never made peace with. We tell ourselves we don’t want to. That person broke our heart or abused us or cheated on us or lied about things, so we have no desire whatsoever to make peace.

But you know what? It’s really important.

It’s important because if we don’t, we’ll carry the wounds and pain from that relationship into the next one. If that person lied and cheated on us, we’ll move into every other relationship feeling we can’t trust anyone.

If we felt tossed aside or ghosted by the person, we go into the next one feeling not good enough and sabotage things before it gets off the ground.

If they were emotionally unavailable and we had to constantly chase them and work hard for their love, we’re going to attract another person just like that until we heal that wound.

People who hurt us are in pain.

I’m not making excuses for them; believe me, I’m not. Some people act in ways that are truly appalling. But most of the time, people are acting out because of their own deep-seated wounds and like children, they haven’t yet learned a healthier way to process their own pain, so they take it out on the ones they say they love.

Making peace with your ex can take on many forms. It can be as simple as taking any of the following actions:

1. Be willing to own what’s yours.

Write them a letter or email or send them a text message and be willing to own anything that’s yours without getting into their stuff. Remember, we can’t make people see or take responsibility for their own hurtful behavior and shortcomings until they’re ready. And that almost never happens when we want it to. They get to that place in their own time and in their own way. All we can do is take responsibility for our own.

If you feel emotionally ready, meet up with them for coffee and talk through how your relationship ended and get closure on things you’re still confused, upset, or hurt about. (Think “The Bachelor: After the Rose Ceremony.”) Sometimes we’re able to get more direct and honest answers about why certain things happened within our relationship once we’ve both had time to process and gain more perspective.

3. Be cordial and/or neutral when you do interact.

Let’s face it, many of us have workplace romances. Or we have to co-parent with our ex. Maybe we have the same group of friends and run into each other at gatherings. Making peace can be as simple as not shooting death glares at them from across the room and making them feel like Satan. Treat them like you would an acquaintance: polite, but with some distance.

Yes I know this one sounds crazy, but often, a lot of the anger we have toward an ex is really anger we’re feeling toward ourselves. I’ll give an example:

I found myself incredibly angry at a guy I dated who was checked out and emotionally unavailable the entire relationship. My story about him was that he never really cared about me and then “strung me along for months,” knowing he wasn’t that into me and then broke my heart.

The truth was, I was really pissed at myself. He was just being him. And the truth was that I’d allowed myself to be strung along, hoping he’d change and start fawning all over me once he discovered how fabulous I was. I continued to sleep with him even though I knew he had one foot in and one foot out. So, sometimes we need to forgive and make peace with ourselves first before we can feel any peace about the relationship.

I truly believe that things don’t happen to us, they happen for us. When we can get out of our story of “what the other person did to me,” and into curiosity or, “what did I learn about myself,” then we can really find peace.

A close friend of mine spent a lot of time angry, bitter, and resentful over a woman he dated who was emotionally abusive toward him and always putting him down. I used to ask him during every conversation: “So what did you learn about yourself by allowing that?” It took him almost a year to finally admit he felt that he wasn’t good enough. He thought that working hard to be loved, something he had to do as a child, was the only way he’d receive anybody’s love.

Once he made that connection, he was able to make peace with her and move on. The two of them are now friends and he ended up meeting a woman five months later who absolutely adores him and treats him like a king.

It can be done. It’s not easy and we all have to do it when we feel ready. But releasing all that negative energy around our exes is what truly clears the space for the right person to come into our lives.

Once we make peace with the people from our past, we can move into future relationships with a whole lot more awareness about ourselves so that we don’t allow the same things that ended our last relationship to creep into future ones.