Do you Struggle to Sleep During a Full Moon? A Scientific Explanation. 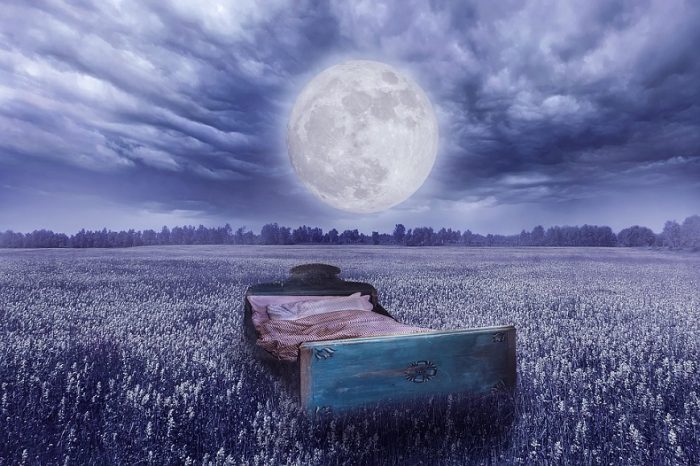 It’s here: How we can use the Full Moon Energies of October to Manifest our Best Life. {October 1 & 2}

We often hear, “The moon must be full!” when people try to explain their out-of-the ordinary behaviour at certain times of the month—and particularly when feeling anxious, irritable, or unable to deeply sleep.

It is commonly known that the moon is responsible for disturbances in sleep patterns, and one study carried out by the Psychiatric University Hospital (UPK) at the University of Basel in Switzerland found that around the full moon there was a decrease by 30 percent in electroencephalogram (EEG) delta activity during NREM sleep, which is an indicator of deep sleep. The study also showed an increase of five minutes in the time it took the subjects to fall asleep during a full moon, and a decrease in the quality of sleep.

The researchers also discovered that melatonin levels were lower for up to four days around the full moon, compared to the other lunar phases, suggesting the moon could affect our sleep four days before and four days after the moon is at its brightest stage. Overall, the people who were studied slept around 19 minutes less during the full moon than they did on a new moon, when the sky is at its darkest.

The study mentions the fact that there is more evening light during the full moon, suggesting that lower melatonin levels, due to the absence of darkness, could be a main indicator. This is because our circadian (daily) and circannual (seasonal) rhythms keep close track of subtle changes, so when the world we live in alters, our body patterns alter with it.

The majority of people who are affected by the full moon seem to sleep fine during other evenings in the summer months, when the moon is not full but the sky is still brightly lit at night due to later sunsets. Therefore, it appears that sleep disturbance is not so much to do with the evenings being lighter, but more likely to be correlated to a peak in light during the month, which temporarily disturbs our circadian rhythm.

The study also stated that the moon’s connection to sleep is “mysterious,” explaining that: “there are probably large individual differences that underlie the contradictory evidence for their existence—some people may be exquisitely sensitive to moon.”

Being unable to sleep deeply during a full moon isn’t simply due to knowing the moon is full, as there are many people who claim not to follow moon cycles, but when they find themselves unable to sleep, they research and discover that yet again the moon is shining full in the sky.

I, along with many others, can tell when the moon is full simply by paying attention to sensory information. One of the main things I notice is that I don’t sleep well during a full moon. Even with blackout curtains, I still don’t feel tired at night, and it is normally around 4:00 am before I finally fall asleep, if at all. I experience sleep deprivation just before, during, and after the moon is at its fullest.

Full moons rise at around the same time as the sun sets, which means that during this lunar phase the sky appears far lighter and brighter than normal throughout the night. On a full moon, the sun and moon are opposite one another, with the earth in the middle, and the sun’s rays shine directly on the moon. The glow reflecting off the moon can be so intense that at times it can feel as though there is no definitive break between day and night, so our body and mind may not receive a clear message to signal when it is time to deeply rest.

Some ocean life, including crabs, lay their eggs and mate in alignment with the full moon’s intense light. Coral is also light sensitive, and over 130 species simultaneously spawn in Australia’s Great Barrier Reef on each full moon, providing the clouds do not obscure it.

Although the bright summer nights have some influence over our sleep patterns, I believe the reason some people are so highly affected is that they have heightened sensitivity to energy—which includes light frequencies. Therefore, whenever the moon radiates powerful energy, those who are “light sensitive” would be far more likely to be adversely affected by the moon’s glow.

Human retinas have high sensitivity to blue light—and during the full moon, it is believed that people who have hypersensitive cones in their eyes are able to detect blue tones. This is a surprising phenomenon, known as blueshift, and the reason it is somewhat of a mystery is that the light intensity at moonlight is below the human cone cell’s detection threshold, so our visual perception is monochromatic. (In simple terms, it is thought that humans are unable to see colour when it is dark.)

The blue-light input, which is more intense during full moons, is thought to affect our suprachiasmatic nucleus, responsible for controlling our circadian rhythm. Our circadian rhythm releases melatonin that helps us sleep, and is also connected to physical activity, alertness, hormone levels, body temperature, immune function, and digestive activity. Therefore, it seems highly probable that the blue moonlight tones that light-sensitive people are able to perceive have a direct impact on our energy levels and sleeping patterns.

It is important to note that moonlight is a reflection of sunlight, and it is not blue—it is thought that only people whose eyes have light-sensitive cones are able to detect and perceive the bluish light. Even though it is widely believed that it is not possible to see color at moonlight, you can discover if you are one of the minority with light-sensitive cones by heading outdoors on the next full moon, as far from artificial light as possible, and stare out at the landscape. When you look out at specific areas and tune your focus, you may notice a blue tint to the scenery, and the atmosphere around you might have a blueish colour to it.

Part of the reason that humans now have out-of-sync circadian clocks and disrupted sleep patterns is due to the invention of electricity and the use of artificial light, which can confuse our natural rhythm if we are also absorbing the energy emanating from the moon. Cavemen, for example, would have worked with the moon phases and used the extra night light as an opportunity to hunt later in the evening, and the extra surge in energy would have been welcomed. Whereas, nowadays many people become frustrated with the sudden energy boost and inability to fully relax and deeply sleep on full moon nights. Instead of allowing nature and modern life to mix as one and understand that at certain stages of the month our need for sleep will likely be reduced, it is common for people to feel perplexed and irritable.

Some people use full moons as a chance to sleep out underneath the moon and stars to recharge and rejuvenate their bodies and minds, as even if they do not sleep for long or as deeply as normal, they still wake feeling refreshed and revitalised.

During a full moon, our planet is situated between the sun and the moon—and as we are in the middle of these two extremely powerful forces, we are subjected to a gravitational pull from both directions. This is why many who are ultra sensitive to incoming energy from the universe feel conflicted and possibly even a little out of control when the moon is full, as our energetic field is being pulled in opposite directions.

Therefore, it is highly recommended to keep our energy grounded during a full moon; which means that for the few days before, during, and after, we should be drinking plenty of filtered water, abstaining from alcohol and caffeine, minimising the use of technology, taking salt baths, meditating or practicing yoga, and spending time in natural environments.

Not only do many people report that they find it difficult to fall (and remain) asleep during the full moon, the following symptoms are also frequently noted:

>> Vivid and intense dreams and nightmares.

>> A vibratory sensation throughout the physical body.

>> Enhanced perception, intuition, and having premonitions.

Disclaimer: If you experience any of the symptoms listed here, please also seek the advice of a medical professional. The above symptoms are commonly noted during major cosmic events, however, there may be other medically related causes.

The Full Moon’s Effects on your Health: It’s no Coincidence, it’s Science. Are you Moon Sensitive?
See relevant Elephant Video

5 Mindful Things to do each Morning.