Cacao vs. Cannabis: which is better for your Spiritual Practice? 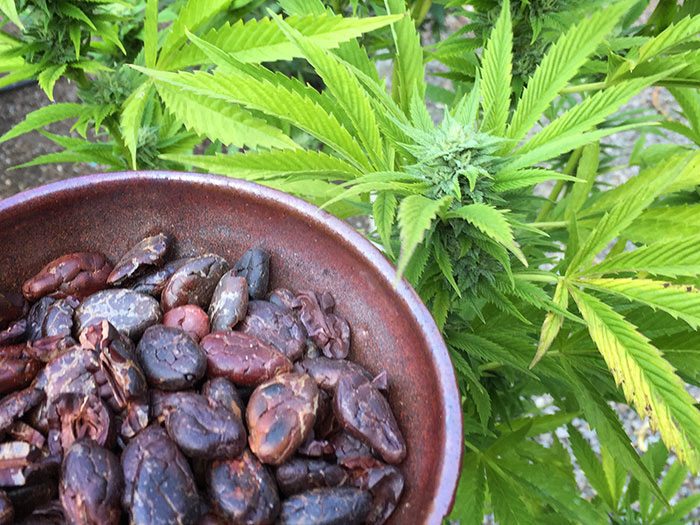 Floating lightness or warm and fuzzy: which connection do you desire?

As cannabis becomes legalized in more areas of the world, now is the ideal time to compare and contrast it with the totally legal ceremonial cacao—the original, unprocessed form of chocolate.

Both of these plants have potential application in a spiritual practice.

If you’re of a more metaphysical persuasion, you might say there’s a “spirit” connected to each of them, or that they have a mind of their own, common references made when talking about plant medicines.

Because of their unique deep nature, these two plants offer notably different things to the world. Understanding these differences is important as we decide how to shape our spiritual practice, in order to bring us the most fulfillment and joy.

Both plants can bring one to a deeper connection with their own body. That in itself can be considered therapeutic or healing, especially in a culture where so much shame gets attached to the physical body.

With cannabis, there can be a floating lightness that counters the heavy weight of life that many people feel on a daily basis. On the other hand, cacao is known as a “heart opener,” producing a warm and fuzzy feeling in the chest, as well as a quickening blood flow.

Cacao contains anandamide, the “bliss molecule,” which is chemically related to THC (the main active compound in cannabis). However, anandamide is barely perceptible, and is mainly noticed only as a light mood boost, or mild euphoria.

Cacao can’t really be considered a drug, even if people snort it—trust me, it’s not as interesting as it sounds!

Depending on perspective, both plants could be considered to have an antidepressant aspect, and may help people through difficult times. They’re also known as creative aids that can tease out ideas, insights, and inspiration.

As with many other plant medicines, cannabis and cacao are both psychological “amplifiers” in the sense that they can bring what’s in our subconscious up to a more central awareness. That could include memories, old conditioning, the source of unhelpful beliefs, and so on.

Here’s where more differences start to come in:

As an amplifier, cacao tends to be more gentle. Any discomfort arising from its use can usually be handled with deep breaths and maybe some movement, such as yoga, dancing, or walking in nature.

Cannabis is known for the “paranoia” it can stir up, which in some cases might be experienced as physical anxiety. Consider it like a rapid looping of subconscious patterns of perception that could lead to mental distortions and physical discomfort.

Are either of these plants addictive? Guatemalan ceremonial cacao is said to have little to no caffeine (a highly-addictive substance). The active compound in cacao (theobromine) bestows focus, motivation, and a sustained energy without any crash or cravings.

Cannabis isn’t physically addictive. There’s no withdrawal like with tobacco, for example. However, cannabis use can easily become habitual. That may not be much of a physical concern, but there are mental, emotional, and even spiritual factors to consider.

In fact, the process of working with any plant medicine can be thought of like a relationship—a sustained interaction with another locus of consciousness.

This relationship we have is one place where the two plants differ quite a bit:

Cannabis is known as a “master plant,” and its psychological effects can be hard to track. It may present itself like a friend or lover who makes up for what we’re missing, or what we’ve lost in real human connection. But because of its stronger amplification and mental looping, it can make that real human connection and communication more confusing.

This is an uncommon view of addiction: when something appears to provide a solution to a problem it’s actually creating, to paraphrase David Foster Wallace.

To further the relationship metaphor, cannabis often acts more like a jealous lover who wants devotees. Cacao, on the other hand, isn’t so much a master plant, as it is a “plant ally.” It seems to want us to be more tuned into our independent path of purpose and meaning.

Like some other plant medicines, cacao can even have a reverse tolerance—meaning that over time, ingesting less cacao could have the same (or even greater) effect. And if we’re consuming too much, cacao lets us know through subtle embodied sensations—not quite anxiety, but something like a mildly-frazzled energy.

So in a way, cacao models an interdependent relationship, where both entities are holding their own weight and able to share that weight in a conscious dance.

I want to be clear that I support the legalization of cannabis.

States that legalize and tax cannabis reap large amounts of funding for social programs that would otherwise get lost to the black market, and end up fueling drug cartel activity.

It’s ridiculous that anyone would ever be sent to prison for anything having to do with cannabis. And we must acknowledge that people of color are disproportionately targeted for that very type of punishment.

This isn’t a statement of moral judgment or a final conclusion on which plant is better. I firmly believe that different things work for different people at different times.

Yet, it’s time to evolve the conversation about plant medicines and get clear on the fine particulars of what they actually do.

While there are some general patterns, only you can decide what’s right for you.

Ultimately no plant heals or cures us—just like no other human can.

We are each responsible for our own holistic well-being.

So let’s take responsibility for which plants we allow into our system at which times, and practice radical self-honesty regarding when something is working for us and when it’s not. 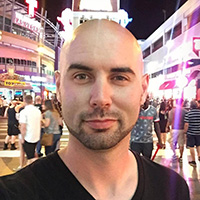