What to Know Before you Smudge. {Partner} 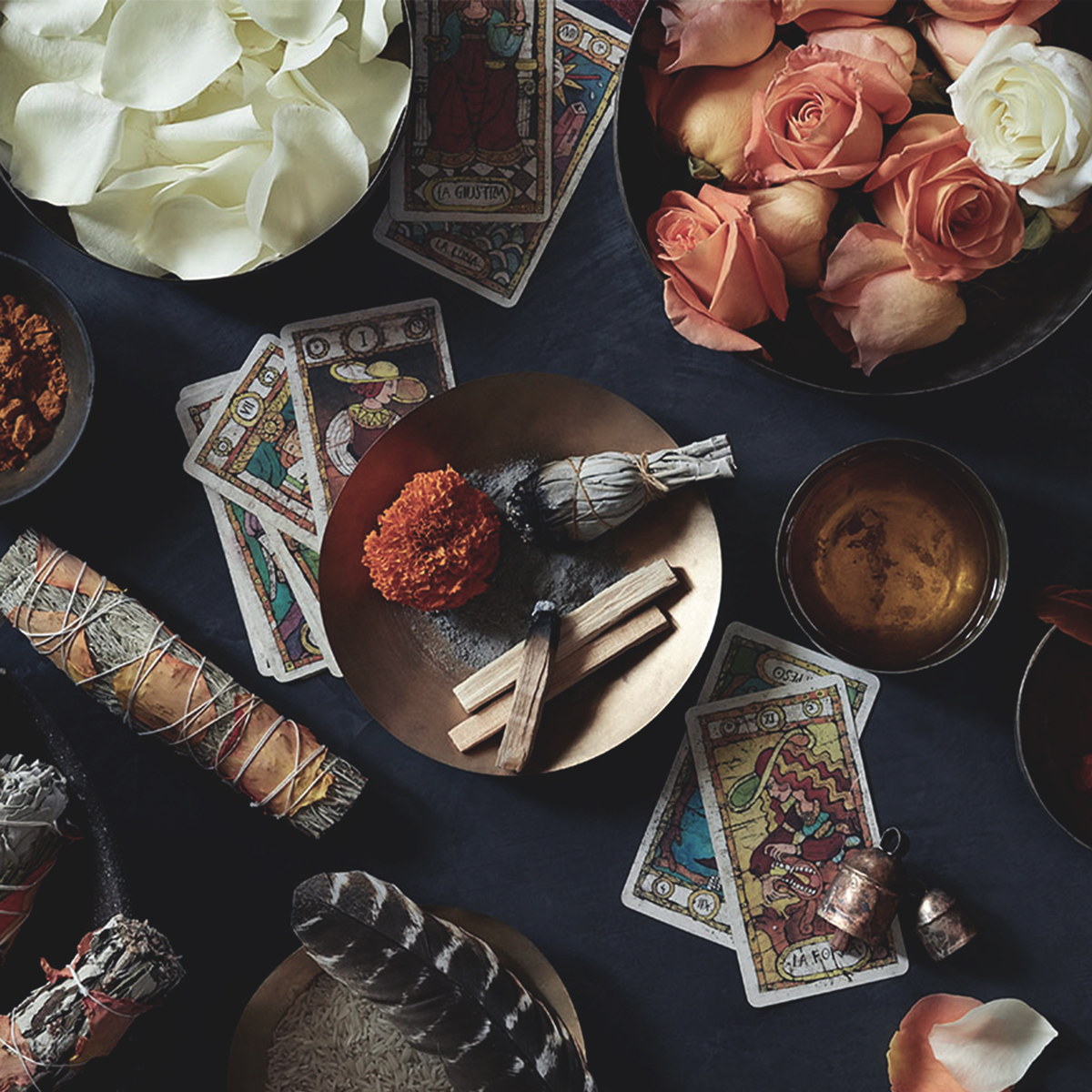 This article is offered in partnership with Bodhi Tree. They’re on a quest for awakened living and offer you tools that support a more awakened life. We’re honored to share their work with you. ~ ed.

Everyone seems to be smudging lately.

But are we doing it right? Do we really understand and honor the meaning behind this ancient sacred ritual? And do we even know where the sage in our smudge stick comes from?

When you step into the world of ritual, ceremony, and sacred space, you’ll quickly learn that smudging seems to be at the center of just about every spiritual practice.

For centuries, this simple yet mystical tradition—in which palo santo, sage, and other clearing plants like sweetgrass are burned to signify the start of a ritual—has been used by a multitude of spiritual faiths, including Hindus, Buddhists, and indigenous cultures in North and South America.

Today, smudging has evolved into a daily ritual for a variety of seekers looking to attract and maintain good energy in their lives. But how exactly does this ancient ceremonial practice work?

The clarifying smoke released from smudging herbs is believed to disperse impurities, allowing healing to commence. Smudging is said to uplift our mood and purify people, places, and even objects like jewelry, crystals, and photographs from negative or trapped energy.

Much like washing your hands before the start of a meal, smudging is traditionally the act of cleansing your aura before you feed your soul through ceremony or ritual.

Of the many sacred plants that have been used around the world for this purpose, indigenous cultures in North and South America believe that palo santo and sage are the most powerful.

Whether you’re a new seeker, or a seasoned spiritual explorer, learn how to smudge ethically with the Bodhi Tree Smudge Essentials Box* >> 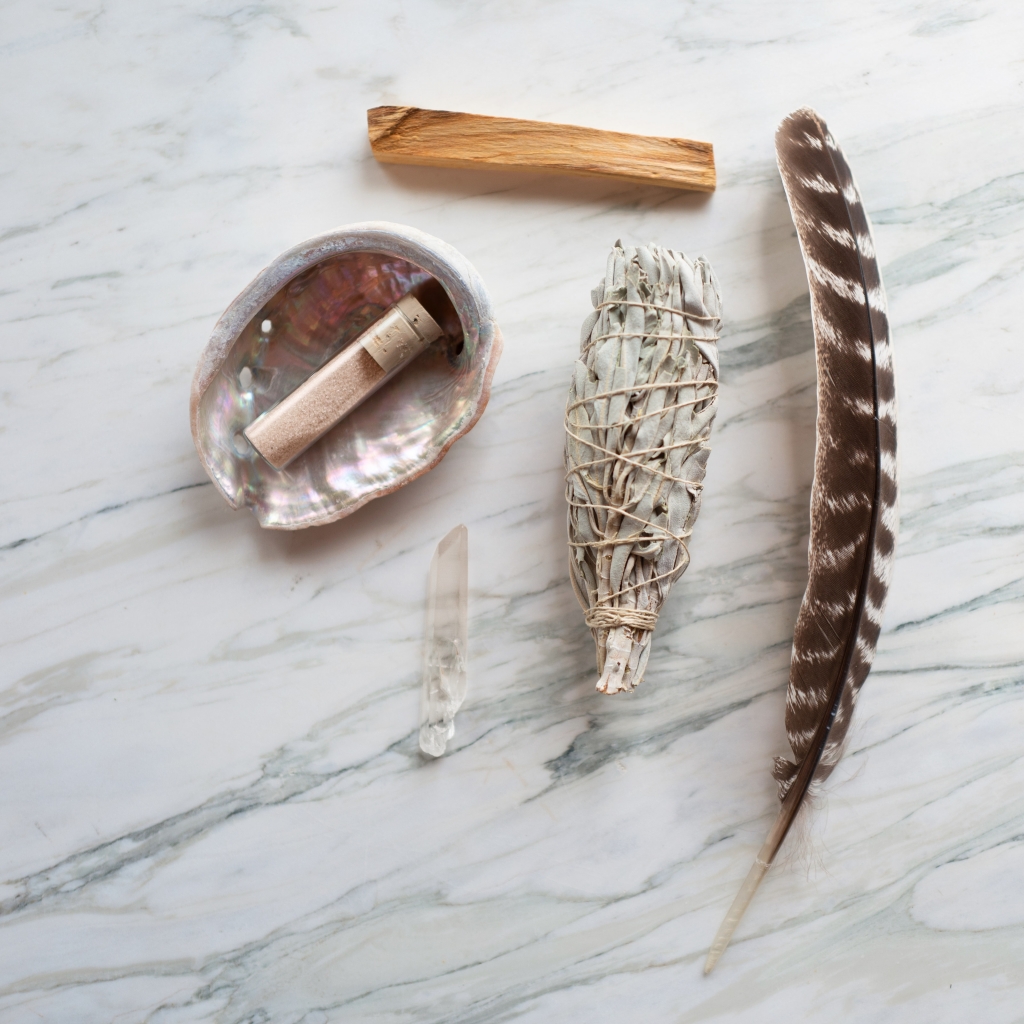 Why is Smudging Effective?

More recently, science has proven that smudging is actually one of the most powerful antiseptic technologies ever discovered. In fact, a 2007 scientific study published in the Journal of Ethnopharmacology found that smudging with “medicinal smoke” for one hour reduces airborne bacteria by more than 94 percent.

This is because, when burned, sage and other herbs actually release negative ions that can purify a space. It also found that the purified or disinfected result could be maintained for up to 24 hours if the room stays closed.

What to Know Before you Smudge

Sadly, not everyone respects the sacredness and purity of smudging. And, as it has become increasingly popular in the West, you can be sure there are plenty of opportunists standing in line to ride the easy money, “spiritual” cash cow all the way to the bank.

As wave our sage smoke around with our smudge fans, most of us are blissfully unaware that the feathers we are using is neither compassionately nor ethically obtained, our sage is Made in China and sprayed with chemicals en masse, and our factory farmed abalone shell is filled with synthetically dyed, toxic sand.

In a practice that’s all about energy, using ritual tools from a dirty industry in an effort to cleanse ourselves or our space is probably not that effective.

But we love smudging, and—if you ask anyone who practices it mindfully—when done right, it works wonders to clarify our energy.

So, what’s a smudging convert to do?

The folks at Bodhi Tree—a beloved West Hollywood bookstore for the metaphysically curious, founded in 1970, and now an online destination for books, articles, talks, and handcrafted sacred home and ceremonial products to support a mindful spiritual journey—say smudging is one of their favorite ways to change their own energy and the energy of the space they’re in.

“It always leaves us feeling simultaneously rejuvenated and peaceful.”

Which is why they decided to create an ethically sourced Smudge Essentials Box. It’s designed just as much for seekers who already love to smudge as beginners who are simply curious about the world of energy clearing and it’s packed with everything you need to practice this ancient ritual.

The difference is: it’s all ethical, sustainable, and intentional.

In it, you’ll find: a purifying bundle of certified organic, sustainably farm-grown and-harvested California white sage, wrapped with a stick of ethically harvested palo santo and a seed crystal that’s charged to promote healing and wisdom. Along with a sustainably farmed abalone shell, a vial of 100 percent natural non-toxic sand and a wild turkey feather, it also contains a simple smudging ritual to get you started.

Every item in this box is selected with the intention of quality and good karma in mind and a portion of the profit from every box is donated to support Native American communities.

It’s the perfect way to get started with smudging, knowing that every part of your energy clearing practice is infused with truly good, clean, conscious vibes. 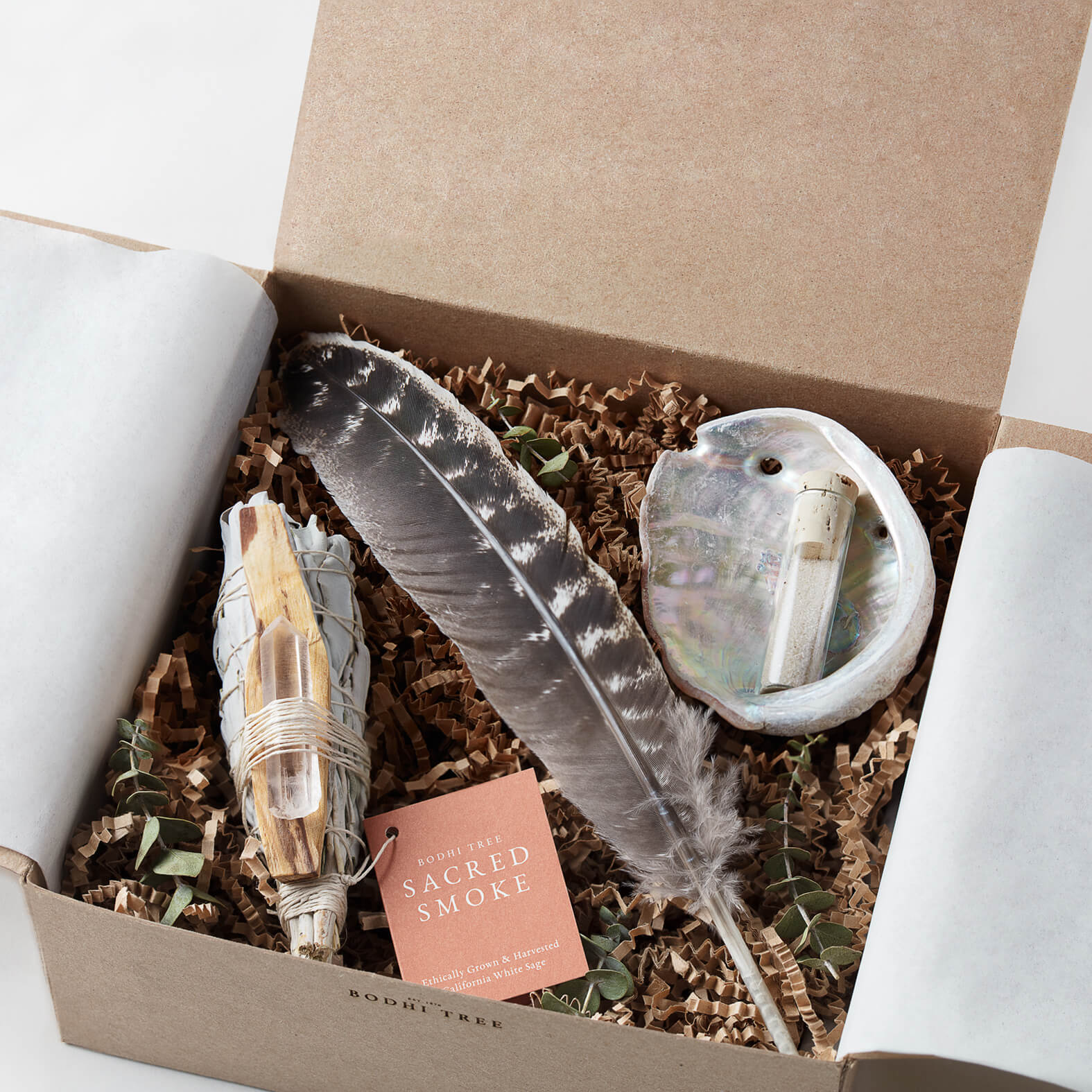 The Meaning Behind the Magic

Sage originates from the Latin word salvia, derivative of salvere, a Latin verb meaning “to feel well and healthy, health or to heal.” Since prehistoric times, generations of indigenous communities in North America have smudged with what is now known as California white sage in ritual, ceremony, and prayer for grounding, protection, and peace. Sage is best used for deeper energy clearings, when settling into a new space, after experiencing trauma, radical change, or when working to manifest a major transformation.

Palo santo translates to “holy wood” in Spanish. This sweet, fragrant tree from South America belongs to the citrus family and was used by the Incas, Shamans, and medicine people for energy clearing, healing, and spiritual cleansing. Palo santo is most effective in daily smudgings, to promote healing on all levels, and to keep insects away.

Either of these are lit to create the clarifying and cleansing smoke which clears the space and carries the renewing powers of the fire element.

Seed crystal is a small piece of single crystal that’s charged with the energies of healing and wisdom.

Abalone shell is intended to hold the lit smudge and represents an offering from the ocean, imbued with the nurturing energies of the water element: empathy, compassion, intuition and the divine feminine—which also makes it an ideal altar tool for anyone looking to embody those qualities.

Sand is placed inside the shell to protect it from heat, prevent the shell’s pearly inner surface from being burnt away, and is connected to the grounding of the earth element.

A feather is traditionally used to guide the sacred smoke and shift the vibrations of a space, lifting stagnant energy during a smudging ceremony. Connected to the wind element, in the traditions of indigenous cultures in North America, feathers are considered sacred gifts from the sky, sea, and the trees. 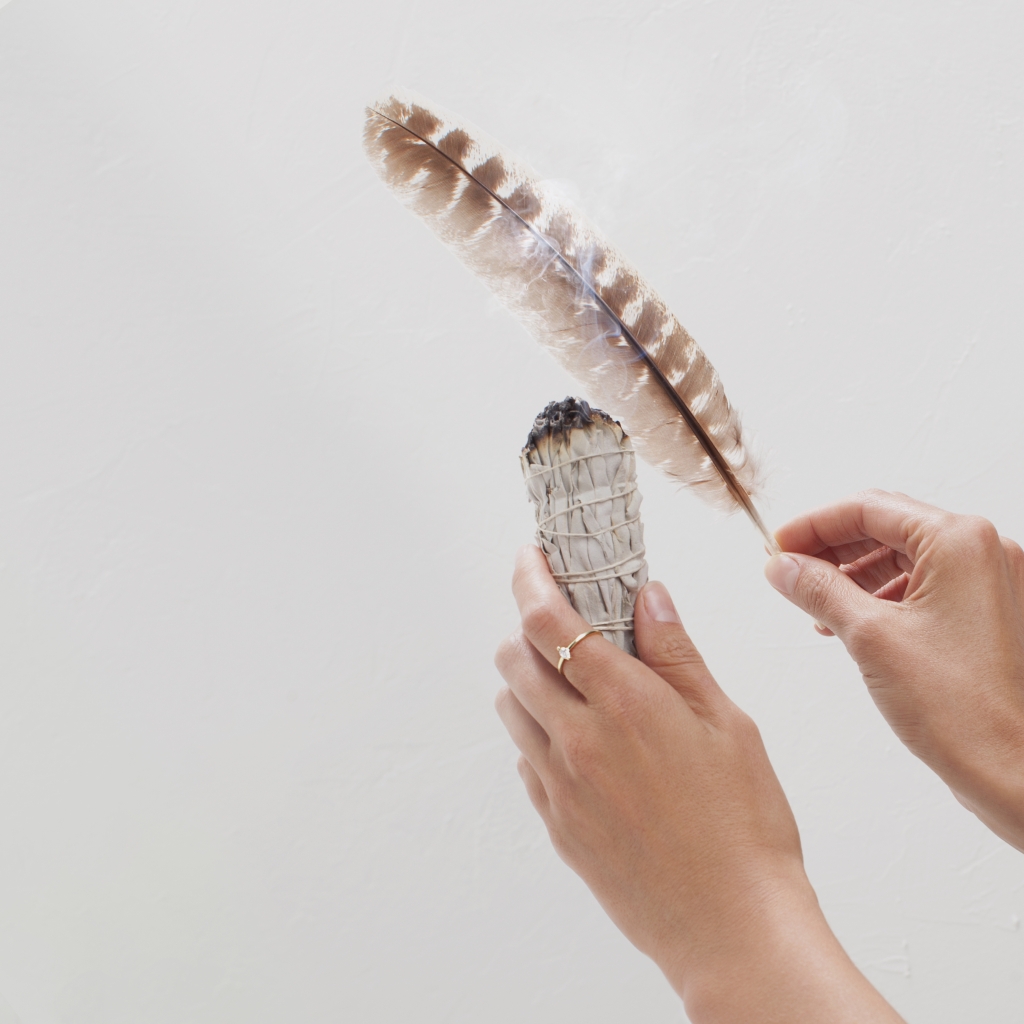 It’s believed that when the wind carries a feather onto the surface of the earth, with it comes a special link to the bird it belonged to as well as to the universal source of creation that connects all living things to one another. In smudging rituals, many types of bird feathers can be used, from the crow for balance, to the eagle for courage, each possessing its own intricate meaning and purpose. But today, one of the most commonly used smudging feathers comes from the turkey, a cherished symbol of abundance, pride, and fertility.

In each Bodhi Tree Smudge Essentials Box, you’ll also find their guide to smudging, which gives instructions on how to perform this energy-clearing ritual.

Whether you are new to smudging or looking for a new way to bring it into your practice, try this simple ritual:

Gather your smudge bundle or palo santo stick, a lighter, a feather, an abalone shell, and a small handful of sand or sea salt grains to protect your shell from the heat of your smudge. Then take a moment to open a window to keep it from getting too smoky and setting off the fire alarm during the ritual. Keeping your space ventilated during the ceremony also helps to transmute and shift any stagnant energies. When smudging, light one end of the sage bundle or palo santo stick with a fire source and make sure to gently blow out the flame while keeping the end lit. 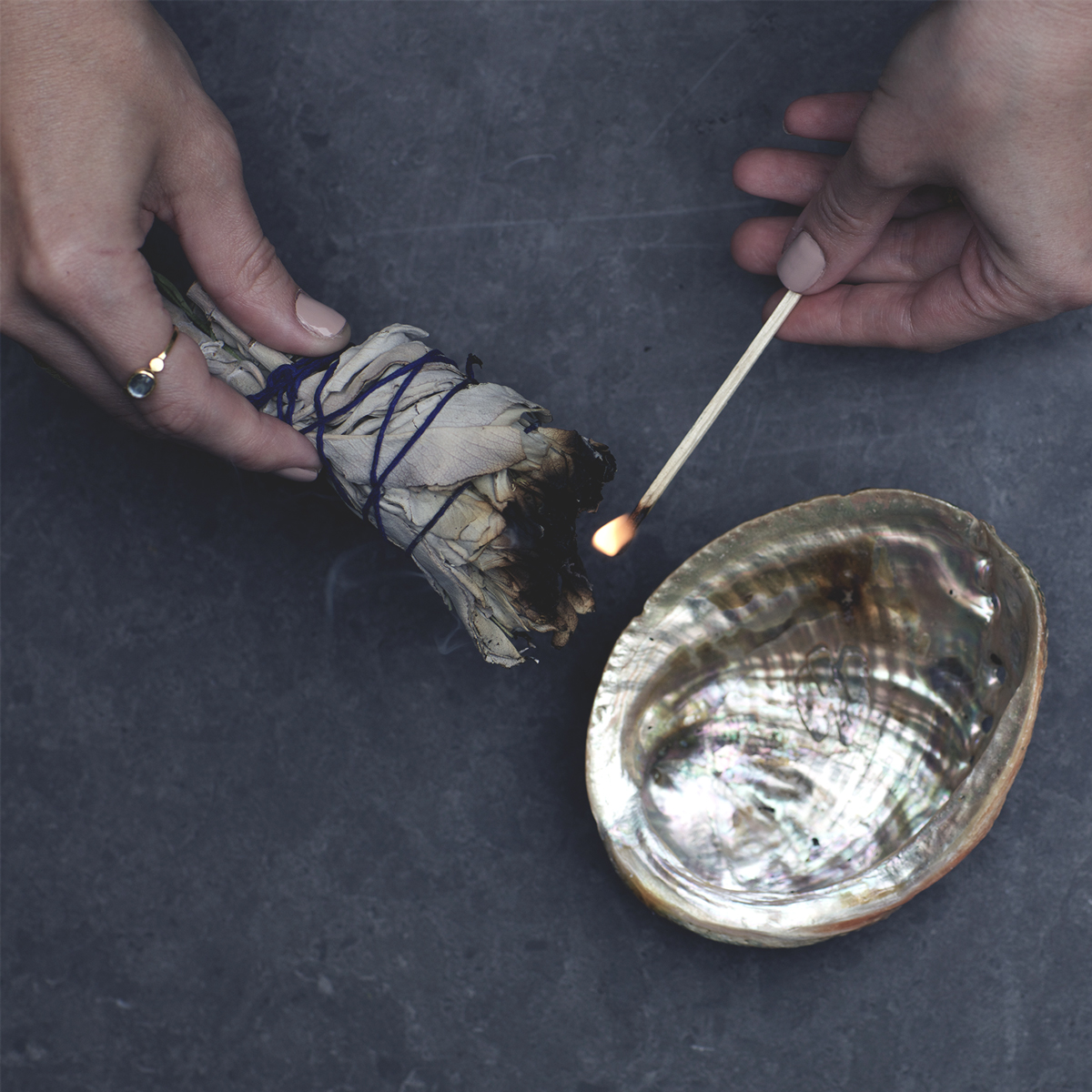 Tilt the smudge at a 45-degree angle. Light one end of the bundle and rotate it in a circular motion around the flame so it’s fully lit.

Gently blow on the smudge after every rotation around the flame until the smokiness is to your liking. Pour the sand or sea salt into the abalone shell to protect it from heat, then place the lit smudge inside the shell—or if you don’t have a shell, in fireproof glass or a clay bowl.

Tip: Do not create too much smoke, as it could oversaturate your space and even set off fire alarms despite having the window open.

Gently wave the feather through the smoke. Start by smudging all corners, doorways, sacred objects, and any other areas of your space that you feel need an energy clearing. Fan the medicinal smoke with a feather in four directions to honor the indigenous prayers going out to the elements of earth, water, air, and fire.

Tip: Be mindful to cleanse the corners of a room, doorways, balconies, and your bedside, as these areas are focal points in the home where outside energies are prone to getting stuck, and typically require a little more attention to clear them away. 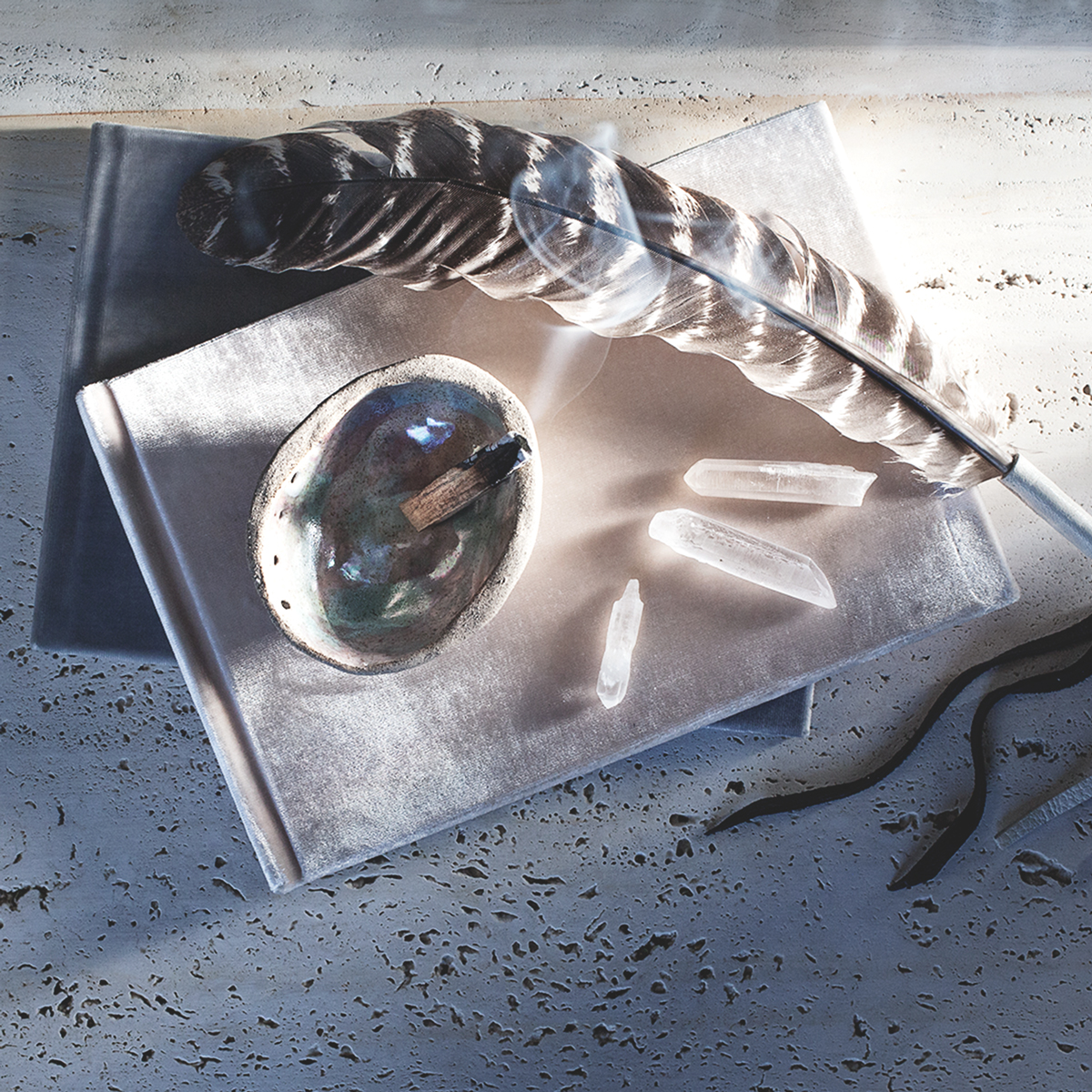 When finished, run the feather through the smoke one last time to clear away any energies it made contact with and absorbed during the smudging. Then, once your space has had time to air out, close the window to seal in the good vibes.

We hope these offerings help to uplift your spirit and elevate your life. May it be of benefit!

Treat yourself, or gift the magic to someone else.
Order your Bodhi Tree Smudge Essentials Box* here >> 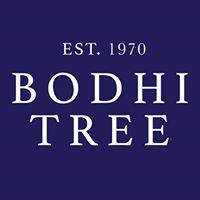