I went, yeah me for getting out!

I was seen, sort of.

I made things awkward; definitely.

Networking events are like middle school gym class, forced socialization. Last night’s affair was no different. Networking events can reduce me to my former self, a short, skinny girl with super blond/white hair and thick glasses who was always the last to be picked while setting up teams in gym.

But these events are necessary because we are new in town and I do want to meet people. I had my husband came along because we both need to get out and meet new people, or this is the lie I am telling myself. It is a bit of a chicken s**t approach, but it is one I can live with.

Because I am uncomfortable with networking in the traditional sense, I have tried to find ways to ease the stress I feel when I am at an event. I have done research one of the tips, it is said, is to show you are a good listener. I am a great listener and an overachiever. I have masterly curated the ability to meet people, ask questions, and make sure they continue to talk, so I don’t have to. The problem is if no one is around me to start a conversation I tend to get overwhelmed, feel like I am invisible, and literally stand up against a wall and become the silent observer. If someone comes up and starts a dialog, then I am all in, but otherwise, I am the stereotypical wallflower. I tell you this to set the stage for last night’s painful experience.

My husband and I got there early, which isn’t a surprise, I find it is easier to meet people as they drift in that to walk into an already full space. We immediately connected with the host, finding out that her parents were from the same area of the US as we both are. We followed her to the area we were meeting and made introductions to the three other men already there.

The facilitator tried to activate conversation by asking an opened question that we were to write our answer to along with on our name; hence someone could walk up and know your name and the one thing they could ask to elaborate on. We stood in a close huddle and exchanged pleasantries as we filled out our name and the one ‘thing’ we were excited about for 2019. It was all very informal, and I thought this isn’t too bad, I can do this. (I put down that I was excited to finish the book I had started. I wrote a book in a month, and now it was time for editing. Pretty exciting stuff, I thought.)

As more people arrived, the facilitator moved around to the end of a long table so she could greet more guests as they showed up and give a name tag to fill out. At the time, I didn’t think anything about it until I was reviewing the play by play tape in my head all night long. By her moving around the table, it left my husband, another guy to my left, and me on one side of the table and everyone else on the other side as they arrived.

The others trickled in, so the introductions dragged on, and it became less personal because it was talking to a group instead of one to one. It became an opportunity for the facilitator to question the new guests about their one ‘thing’ and have her connect with them instead of each other connecting. What made this worse was, when it was just a few of us she didn’t address our one ‘thing’ because we were to do so when it was one-on-one, so I never had a chance to expand on my one ‘thing’ to the group.

Finally, the facilitator broke up the introduction part of the evening by saying we should all go get drinks. And I overheard her say that the place wasn’t making pizza tonight because it was slow. WTF that is what I had planned for dinner. I was hungry. Now I needed something, and they only had cheese and crackers to buy (we were at a brewery). My husband hurried to get the cheese and crackers.

I turned around for a second, and in a flash, all the people were paired up. I was the odd man out. I looked down at my name tag, my one ‘thing’ was to finish the book I started, well without an explanation that sounded lame. And there I stood, in my mind, I was back in the gymnasium with ill-fitting shorts and off-brand sneakers, rejected by everyone.  I crawled up on a stool, willing the tears not to come and waited for my husband to return. I felt alone, so very alone.

Did I mention I was hungry?

I wanted to stand up and yell, “I wrote a full-length book in a month! And I am worthy of your attention! Why doesn’t anyone f**king ask me anything?” But instead, I gobbled the cheese, crackers, and salami my dear husband bought so I could get the hell out of there.

We finally got the attention of the facilitator to say our, and she looked at and said, you are leaving already? Next time you two should push yourselves out of your boxes. Sure, I can see that happening. The night’s motto was, come as strangers, leave as friends. Nope, don’t think that happened. 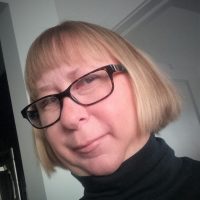 She is a left-handed introvert with natural blond hair from Nordic roots who loves puzzles and problem-solving. She thinks with the left and the right sides of the brain and c… Read full bio