So I met this girl. 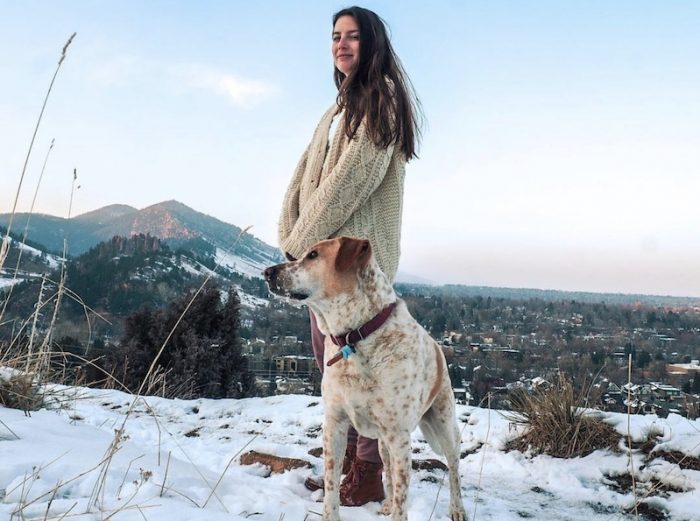 A few months back, I was messaging VIP influencers on Instagram (I only message those I respect, who aren’t overly narcissistic, who seem devoted to helping others and being of service).

I messaged a yogini who lived somewhere down south, and had the usual brief convo about “hey, let’s feature you on Elephant! Write a story! elephantjournal.com/post!” It’s my goal to get folks off of Zuckerberg-owned Instagram—not completely, not at all—but to get them posting their heart to independent media, not just corporate oligarchy (Google and Facebook are sucking 80% of the money out of all journalism, killing local papers in particular).

A month later or something, I must have seen a story or post and I hearted her. That’s the default “like” on Instagram messages. I remember thinking that she seemed classy, not self-obsessed.

A few days later, she asked me “Is that your nugget?,” about a little video story I’d done on my dog Redford.

We started texting. A few days of non-stop funny witty sharp quick texting, all day every day, staff and friends wondering what had come over me (I’m rarely on my phone, usually), I asked her out. After a long awkward pause she sent me a monkey covering its face emoticon. Emoji!, I get it!

So, more or less, that’s how it all started.

I’m in love with a Monkey.

A few months after daily texts and calls and video calls (we’ve corresponded more than any relationship in my life, already), I flew out to her in Asheville, near where she lives. We spent three days together, including two at Grove Park, where F. Scott Fitzgerald did some writing. Quartersawn! It was fun, and raw, and scary, and romantic, and scary, and fun.

Then we did another few months of long distance phoning and getting to know. The slowness of long-distance was frustrating, but it forced us to, well, slow down. She had a delightful laugh. She made funny squees of joy and exuberance. She was pretty, and beautiful, without being vain. She was vegan, and is, and loves to eat, and loves to cook, and loves to dance, and had bravely left her career path for something new and unknown and more meaningful for her. She wanted a family, some day.

And all through the future-thoughts and the present-joys, we kept saying, our little mantra: one day at a time.

Who knows what will happen, but I do know: Happy Valentine’s Day, Melissa.

I wrote a book, a few years ago, about the sort of love I was looking for: sane, grounded, funny (a sign of sane and grounded), a good mother, a genuine-hearted partner who respects my and her own independence.

I’ve found it. Maybe. One day at a time.

All I know is: I’m two-feet-in, and we’re zip-lining off a cliff into something like love.

Waylon reads from, "Things I would like to do with You," his book about Love. Preramble.