How I became one of those Woke-ass Spiritual Types who say we can “Live our Dreams.”

Not long ago, if I saw a spiritual teacher or life coach on social media claiming I could have the life of my dreams, I would totally scoff and judge the fuck out of them.

I assumed they were a sleazy salesperson selling snake oil.

Living your dream life? Puh-lease. WTF ever. What bullshit.

I remember feeling disgusted and angry when I’d see these ads on Facebook—I was so over them. That sort of dream life scenario was for the privileged, the already financially wealthy. I couldn’t possibly hope for more than what I had.

They had no clue what my life was like, they didn’t know my situation. I was a poor, single mom. I had been through hell growing up. I was a survivor and deserved empathy, recognition, and a pat on the back.

I believed that whatever sucked in my life was because of someone else. I felt I was completely innocent, the victim of so many wrongdoings, and there was no way I could achieve this so-called “dream life” that spiritual teachers promised.

This was me. A total Debbie Downer. I existed in my egocentric stories. I was robotic, miserable. I was a victim of trauma and dysfunction. My day-to-day was nothing but believing that I wasn’t good enough, that I was unlovable, that I wasn’t pretty enough, that I was just one of those people who’d gotten a bum deal. I was plagued by anxiety, depression, and stress for most of my life.

Back then, I would never have understood the meaning of the word awareness.

If someone were to try to explain it to me, I would have assumed that I understood. But there was no way in hell I truly grasped it. I had no clue that I was in a victim mindset. I thought everyone owed me something.

And then yoga happened.

I took a few classes sporadically, and then became intrigued and curious enough to start attending more of them. The next thing I knew, I bought a package and was going five to seven days a week. I was fascinated by it.

And then I started to change. I was feeling better. I was becoming more positive. People around me started noticing all of this. I wasn’t even sure what was happening to me. I couldn’t articulate why I was feeling so great.

My point of view on life was shifting 180 degrees. I was grateful, joyful, appreciative, and hopeful.

All of this from developing a yoga practice? Um, okay, dude. Cool.

A year into my yoga obsession, the owner of the studio asked me if I would be interested in teaching, since I was so passionate about it. I could not stop thinking about the idea for a few weeks. Me? A yoga teacher?

“Don’t you have to know crow pose and speak Sanskrit?” I asked her.

And now, here I am, three years later: a 500-hour graduate of a method of Vinyasa flow called “Synchronized Vinyasa.” This breath-based mindfulness practice has blown open my life. The practice and teaching of it have become the love of my life.

This was the catalyst for endless transformations in my life, which have also been rapid fire. I am unrecognizable from the person I was four years ago.

I don’t think there is a day that goes by that I am not grateful for developing a yoga practice, because it led to an awakening, and now those awakenings just keep on coming. Now I’m one of those “woke people,” who’s gettin’ more woke by the day.

The hilarity and irony of this is that now I’m one of those people—a spiritual coach who’s here to say the same thing the teachers before me have: your dream life is just around the bend.

There is a better way to live our lives, and we can free ourselves from suffering.

How do I know this? Because I am not special. I am not unique. I just decided to follow through with this spiritual life, this awakening process. If I can do this shit, any of you can.

One of my biggest realizations in this promise of a “dream life” is that the dream life can look different for all of us. We are bombarded with images of influencers, coaches, and celebrities in exotic places doing rad shit. Make no mistake; I am all about that too.

But what if my dream life was just a little more simple? Living life in flow, on my terms. To me, that is the ultimate freedom.

If you’ve made it to the end of this article, know this: this can happen for you. It is not bullshit like I originally thought. Living life on and off the mat and applying spiritual principles into your day-to-day can blow up your awareness and lead you to awakenings, breakthroughs, and the main prize—knowing that you are whole and complete as you are. 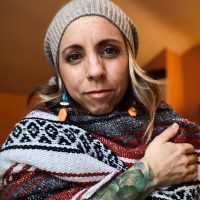 Donna Jean Hickey is a Spiritual Advisor/Coach who specializes in facilitating healing in others. She is a yoga/meditation teacher specialized in breath-based Synchronized Vin… Read full bio