How a Parent Explains to her Children that she is going to Die Soon.

They knew from the moment my doctor called that something was wrong.

My two sons, then aged one and four, had been sent to bed a little early so they wouldn’t bear witness to my terror. A routine MRI scan had revealed the worst: a seven-centimeter tumor in the frontal lobe of my brain.

A week later, after my craniotomy, I got my formal diagnosis: glioblastoma multiforme, nicknamed “The Terminator.” My doctor told me it has a 100 percent recurrence rate over time. I was given a year to live.

There are so many difficult conversations to have when you find out you have a terminal illness, but none were so hard as telling my young children.

At first, my husband and I didn’t have the words to explain to them what was happening, because we didn’t know. It was like attempting to describe a hurricane from the eye of the storm.

A parenting book given to us by a friend encouraged age-appropriate honesty with children of terminally ill patients. It argued that lying breaks the trust between a parent and child, and that if I died after telling them I wouldn’t, my children wouldn’t be able to find resolution or take advantage of the resilience that comes naturally to them. It made sense to us and suited our parenting style.

I instantly understood that the story of my cancer was the most important one I could tell my boys. I also knew then, as I do now, that shaping my story was not just for their benefit, but also for my own.

Narrating a responsible version of hope to them helped me to face my impending death with kindness. No topic was out of bounds, but we never forced Henry, our oldest son, to talk about things he wasn’t ready to hear. The result of this philosophy meant that little conversations bubbled up in random bursts, often at the breakfast table in between bites of cereal, or in the early morning hours as I wrote through a sleepless night.

We spoke almost constantly about love—how mine, as their mother, would never fade even if I died.

One early morning, Henry shuffled over to where I was sitting, writing in my journal as I did during those early days of recovering from my surgery, when the steroids prevented me from sleeping. The sun hadn’t come up yet, and he was holding his two favorite stuffed toys—a blanket from when he was a baby and Bunny, a floppy friend. He was groggy with sleep and rubbed his eyes as he climbed onto my lap.

“Mama, Bunny has two tumors in her head. She is really sick and needs to go to the hospital. She’s really scared,” he said.

“Let’s zoom her to the hospital then!” I said, playing along in our sad game. “She will have the best doctors we can find, and we will help her be strong so she can do everything she can to get well. Even though it sounds like she’s pretty sick and there’s a chance she still could die, even if she fights really hard. We just have to do everything we can to make her feel okay. What could we do to make her feel cozy?”

“Tuck her in and hold her while she sleeps. She wants to cuddle,” he said, nesting her into the crook of my elbow.

“Okay, I’ve got her right here, she doesn’t need to worry. We’ll help her in any way we can, okay?” I said, reading the reassurance as it settled over his worried face.

“Okay. I’m going to get some yogurt while she sleeps,” he said, as he turned and walked toward the kitchen.

I began writing a blog, at first for far-flung relatives and friends as a means to answer the questions in my voicemail and inbox in bulk. Eventually, it evolved into a public journal directed at my sons’ future selves. I answered questions I imagined they might have wanted to ask me someday if they could, like what it felt like to be on the radiation table, or what I thought about when my doctors told me of a new treatment. Writing became a place for me to speak the unspeakable and to plan for a future I might not see.

Eventually, I wanted to write something not for my sons’ future but for their present. I wanted them to understand that no matter what happened day to day or week to week, they were safe. The desire to speak honestly to our boys, to convey the brightest truths as a foundation for their security, led us to speak almost constantly about love—how mine, as their mother, would never fade, even if I died.

So I wrote them a picture book.

I woke up one morning with an image in my mind of an enormous, cuddly creature that would serve as an outward representation of my love. No matter what happened to me, that creature would still be there, a constant companion to my sons. My friend Willow Heath agreed to do the illustrations, and after working on the book for months, I had created a physical manifestation of our family’s philosophy, a true labor of love.

During those purpose-filled months, something wonderful happened. I began to feel healthy again, and my doctors began to speak differently about my illness.

My scans were coming back clean, and my status as an outlier began to take on power with descriptors like “success” and even “miracle.” Suddenly, my doctors were hinting at decades rather than months, which is where my hope lives today.

“Lasting Love,” the book I wrote for my boys, comes out this August, about two-and-a-half years after I was given one year to live.

When I opened the first copy and scooped my ever-growing boys onto my lap to read it in the same chair where Henry had brought Bunny to me years ago, we cried our way through it. I wiped away our tears and said, “It’s only a story now, boys, not ours anymore. I’m so grateful to be here to read it to you.” 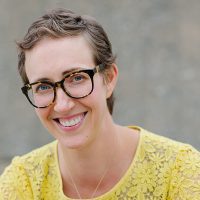 Intuition Literally Saved my Life—& it can Save yours, Too. The Best Explanation of Grief & “Moving On” I’ve ever Heard.
See relevant Elephant Video