How One Night (& One Man) Inspired me to Love Fully.

I just got a call from the Carmel police station.

It was the night crew thanking me and my 13-year-old daughter for saving a life—telling me I should be proud of the example I set for her tonight and expressing their gratitude for the kind of citizen I am.

The ironic thing is that until that moment, I felt that I must keep tonight a secret. I had just asked my daughter to do so as we settled in for bed.

I’ve often asked my children to not talk about the times when I’ve randomly helped people in need. As a single woman who follows her intuition, and as a woman who loves and trusts life and God beyond what most would call logical, I have been accused—many times—of being reckless in my love and willingness to serve.

I live in fear that someone will try to take my kids from me, which would leave me at my weakest point. So I keep my ways below the surface. And my love for this world hides in fear of those who fear.

I know that two attractive females driving a nice car on a winding, dark highway with no protection would never be advised to stop for a drunk, foreign man walking on the side of a road.

But that’s what I did—safely. And there is no scary story that you could tell me that would not have me do it again, because trust me, I’ve heard them all before.

Tonight, a 30-year-old man from another country was walking down Highway One. He had parked at Bixby Bridge, written a suicide note, and locked his keys in the car that he would not return to. He was drunk, which it turns out was a rarity for him, hated his job as a software engineer in San Jose, and had just been left by his girlfriend. He was also well-loved by his family, well-educated, and kind.

Tonight, I worked late at my studio, which I never do, but my assistant was gone and I was doubling up to get everything done before I had to take the kids to Kansas to see my grandfather on Friday. My son asked for a sleepover at his friend’s house, so I got home at 9 p.m. and packed his overnight bag. I asked my daughter to drive with me so we could spend a moment catching up.

After I dropped my son off and gave him a kiss goodbye, I got back in the car and my daughter asked if we could drive to Big Sur and just look at the stars. There was a full moon, as she pointed out, and I was still wound up from work, so I agreed.

We have never driven to Big Sur randomly after 9 p.m.—ever.

Tonight was not extraordinary. It involved me driving, my daughter following her guidance and intuition, and a man who was experiencing a deep awakening.

The pain he was experiencing is something that many have felt before. I wish I could say I’ve never known that kind of pain, but I have—even if I was never bold enough to drive to a bridge.

The story he told was that he was a loser for not being more of a man. He cried in my car, apologizing for not being a man. To which, of course, I laughed, knowing that a strong man is one who owns his grief without shame, and not a person who doesn’t feel. I told him his pain only reveals that he cares.

The love I have not been afraid to model for my children, but that I’ve been afraid would be used against me. And somehow, both me and this man needed each other to move past our fear.

It was a beautiful night.

This is a beautiful life.

The foreign, dark-skinned, drunk man in my car said so when he said goodbye to my daughter and I. 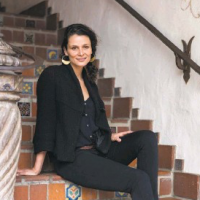 Kierstyn Berlin has had an interest in holistic design from a young age. “In my mind, holistic architectural design has always been the perfect merging of creativity with th… Read full bio

Suicide: the Struggle, the Truth, the Light. 9 Dos & Don’ts: how to Hold Space for someone who’s Hurting.
See relevant Elephant Video