A Tribute to my Tantra Mentor, Psalm Isadora

She was wearing an orange flowy dress and as she swayed her hips she cried out wailing “ma,” dancing and chanting to Kali.  I couldn’t keep my eyes off of her. I was in awe of a wildness that I wanted to touch in myself.  It was in that moment that I knew, Psalm Isadora, would be a part of my sexual healing journey.

It was an evening on a winter day in NYC.  I was browsing social media and I found this woman who was raising money for a kickstarter campaign for her book on Sacred Sexuality called, “Sex, Suffering and Freedom: Memories of a Tantrika.”  When I watched her video, something ignited inside me that I couldn’t explain.  I knew then I needed to reach out to her.  I felt in that moment I had found what I had been looking for in a very long time.

I had been looking for an authentic Tantra teacher for awhile so I emailed her immediately and asked her to be my mentor.  Psalm was doing work that I wanted to do in the world.  She was a yoga teacher empowering women and men with Sacred Sexuality, yoga teacher trainings, and pilgrimages to India.  She even helped sex trafficked women in India with her “Courage to Rise” campaign, teaching them yoga so that they could empower themselves and others.  I left three months later for her yoga teacher training, one of the many trainings I did with her.

Psalm Isadora was an unapologetic force of nature.  She had massive energy and she was unstoppable.  I admired her fierceness and her warrior spirit.  She wasn’t always a sexually liberated empowered woman though.

Psalm grew up in a hippie commune in Northern California where she had a disempowered childhood which was unfortunately rife with physical, emotional, and sexual abuse.  She had many of her own wounds to overcome as she worked with her own sexual shame and trauma.

After running away from home, having a child as a teenager, and experimenting with sex and drugs during her 20’s to escape from her pain, she ended up in the emergency room from a suicidal episode.  Being diagnosed with bipolar and taking medication for depression and anxiety, left her feeling numb and creating self-destructive behaviors.  Psalm was a single mom and had hit rock bottom but a voice inside her told her to take yoga.  Yoga was the bridge to the medicine she was seeking and had saved her life.

As her student, I truly felt inspired by her story because after Psalm found yoga, she felt like there was something else missing.  We had similar paths.  We wanted more.  We both knew that there was something more.  For both of us that turned out to be Tantra.

In 2007, Psalm traveled to India where she studied Tantra and was given an initiation in Shakti Tantra Yoga – the ancient teachings of the divine feminine.  This lineage taught about sexual energy, teachings that had been kept hidden in the jungles in India because of religious taboos.  Sri Amritananda, also known as Guruji, educated Psalm about Tantra in the Sri Vidya tradition.  She used it to heal her own “sexual wound’ and heal others whose sexuality had been crippled by the trauma of abuse.

Guruji taught her that sex is sacred and was tied to pleasure which was to be given to God as an offering.  There was a time where there were Priestesses that helped people pray to their own bodies.  This ancient lineage is about worshipping yourself and your life like you worship the Goddess.  He told her to teach it to the western world.  This tradition empowered her to fall in love with herself.  She would finally found how to be herself and speak her truth.

Psalm incorporated Tantra, Sufism and Christian mysticism into her teachings.  That’s what called me to her.  Her love of Rumi, Jesus, and Egyptian Alchemy resembled my own.  She loved teaching that sexuality and spirituality were one.  According to her, Tantra was the awakening of the senses in the body and the quickest path to bliss and liberation.

“I’ve taken my greatest wound and made it my greatest power.  I can now help carry other people through their dark places and into empowerment and light around sexuality and spirituality.  Because there’s an orgasmic breakthrough on the other end for all of us.” – Psalm Isadora.  Her story would be the essential reason why women (and men), from all over the world, wanted to work with her.

She oozed with confidence, playfulness and enjoyed being provocative.  Psalm was compelling as soon as she walked into a room.  Everyone wanted to talk to her.  She wasn’t judgmental.  She could hang out with babas in India or celebs in Hollywood.

I decided to continue working with Psalm as she transitioned from teaching yoga to fully coming out as a Sex Coach, because I was so passionate about the sexual awakening movement.  I kept traveling to LA two to three times a year to study in her Venus Code program (which at the time was a pilot).  I’d never seen a woman so determined to rise in her mission and focused on her life purpose.

While living in NYC, we’d often get on the phone to talk about her new brand, OYoga.  Oyoga means “Orgasmic” yoga, a feminine flow which incorporates breath, sensual movement, meditation and ancient techniques to help women connect deeper to their bodies and activate their sex magnet, shakti.  Psalm would often tell me, “Help me blow up OYoga”.

I stayed close to Psalm for many years and I helped her get connections with a publicist in NYC.  I helped promote her online courses as well, and at one point wanted me to move to LA and be her right hand.  Many times she’d asked me to be her full-time assistant, but I had to decline because of my commitments in NYC.

After my initiation with Psalm during my last training with her, I was able to come out fully as a Sex Coach and not feel the stigma of shame around sex.  Her energy was inspiring and it motivated me to do my own work in the world.

Psalm was a genius and was able to create and deliver at full speed.  I felt so passionate about her mission.  I always wanted to be there to support her.  She wanted to take Tantra to the mainstream and build leaders to share her teachings.  She felt strongly about providing sexual education for the masses.  She wanted me to be at my best, so even though I felt like she was hard on me, she really believed I embodied her work.

In one of her talks, she said, “People are starving for sexual healing. It’s the one area left in the shadow, your sexuality. It’s the most natural thing.”  Her mission was to free society of those taboos and build a new paradigm.  She believed that we all need a better connection to sacred sexuality.

She ended up doing a Venus Code Sex Coaching School and curriculum which I assisted.  I also led her retreat in NYC and taught with her at workshops and events.  She gave the timeless practices names like the Bliss Breath, the Kiss Meditation, and the Breath of Arousal.  She taught women to use jade eggs in their “yoni” (vagina) to “unlock their full sexual potential.”

She rolled with high executives in a male dominated industry in Hollywood to get her show going.  It’s hard to be a powerful woman and it can be threatening to this patriarchal world.  She continued with unwavering passion.

When she did her talk on Sacred Sexuality at Mindvalley and Sexual healing at MindBodyGreen, her message spread like wild fire.  Psalm impacted so many around her that even after her passing, people talk about her in social media.

She was an embodiment of the goddess Kali and that is, I believe, why she attracted so many.  She gave tough love but only because she really, really cared.  Her mantra was: “zero fucks given,” but in reality she actually cared too much.  She had a huge heart inside her tough shell.

The last day I saw her, we went out for dinner and we had the chance to connect and be vulnerable.  I had asked her about her life before, her parents, and her son.  I felt how deeply she loved her son and was trying to do everything she can to give to him.  I didn’t know that night would be the last time I would see her.

The latest depression that came over Psalm was a heavy one and it weighed her down.  She was trying to quit Xanax which she had been using for some time to treat insomnia.  In her attempt to get off the meds out of her system, she decided to quit alcohol and caffeine too, the withdrawal caused her to have suicidal ideation which is common when you try to quit Xanax.  She passed on March 26, 2017.

It was really hard for many to understand including me.  The community was heartbroken and devastated from the loss, but Psalm didn’t give up on her life, on her healing work or those that loved her.  She suffered from a mental illness and the voices in her head was so strong that she began to believe them.

Psalm has left a legacy which her son and dozens of sex coaches are still carrying on with her message and sharing her teachings.  Many still feel her energy and presence strongly, even those who had never met her.  She would have been proud of the mark she has left in everyone’s lives.

I miss her cackling laugh, her swag when she walked into the room, the trap music she played, her deep, piercing eyes, and her wisdom and wit. I’m grateful to have shared in this journey with her as my friend, mentor and Tantra teacher.  I loved her deeply.  We all did and always will. 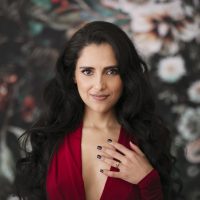