How I learned to use the Narcissist as Fuel.

We live in a time when we are seeing a major rise in awareness, activism, and healing around the narcissistic abuse paradigm.

I find all of this information to be vital to awakening and healing, for both ourselves and the planet. It’s so important to discuss, share, and understand it so we can, quite frankly, save ourselves.

My own healing from narcissistic abuse and trauma has been harrowing. I am a survivor of over three decades, including emotional and physical incest, and it has taken me the better part of 13 years to unravel it all (not that we are ever done growing and learning).

There was a point when I thought I would never heal, that I would never move from the cycle of re-victimization and survival to warrior or “thriver” status. That point wasn’t even that long ago.

In my new therapist’s words, I have done an “epic amount of work.” It used to feel like I didn’t have a choice, that I had to do this or I wouldn’t survive. Now I acknowledge that I committed to this path, even when it felt like I had strayed off of it—even during the times I felt like I would never heal.

The thing was, I kept getting stuck.

It seemed like no matter how far along I got on my healing path, I would end up back in the same place. I would end up unintentionally repeating the trauma cycle: back in abusive relationships or in isolation and recovery from them.

It didn’t seem to matter that I had become an expert in understanding the language of narcissistic abuse. I may as well have a PhD by now in the neuroscience of trauma and the understanding of the personality disorders that perpetrate it. In fact, I know more than is really beneficial to me at this point. It may have even become detrimental.

Because no matter how much I learned about malignant narcissism, I found myself sucked back into the victimization cycle all over again. That is, until the day some months ago when I woke up and saw the truth:

I had been the one (unwittingly) abusing myself for years.

I don’t mean to say that I became an actual psychopath. What I mean is that the only psychopath who was really causing any damage was the one in my mind. This is the moment I began to liberate myself. It was alchemical and empowering. For me, it happened through the process of “The Work” of Byron Katie.

This was also the moment I could finally see how much damage my own thoughts were causing in my life. It was and is the most powerful revelation I’ve had in these 13 years since I first realized I was being abused. It was also the moment when I was finally able to unravel them and step into my true power.

I had believed the dominant paradigm that I would have flashbacks and complex PTSD for the rest of my life. I had tried every type of healing available, using traditional and alternative modalities, to try and “fix” my thinking and myself. I was desperate. What I finally came to experience first-hand was that the only barriers to my healing were the ones in my own mind.

Much to my relief, I also saw that since I was the one who adopted the beliefs, I was also the one with the power to change them. It began with challenging them. It began with letting myself tune into my horror show of thoughts and emotions and committing to deep self-inquiry.

Trouble was, it did happen, they did do those things to me, and I was still suffering. As Byron Katie so aptly puts it, “When I fight with reality I lose, but only 100 percent of the time.” That isn’t to condone any of the horrific acts of trauma I survived, just to acknowledge that they happened and no amount of morality can change the facts.

This seemingly simple concept ended an entire war within me—a war where I was fighting reality and myself on a regular basis. A war where I was constantly exhausted, angry, grieving, and depleted. Never able to live fully or feel fulfilled.

It was a war that kept me perpetually trapped in the narcissist’s game. I deeply understood that all the abuser ever did was play a game of psychological manipulation that got me to turn against myself. I decided I was done playing this game of self-abandonment and vowed to end it.

I saw that the thought parade of “the shoulds” kept me in a state of constant insanity. In hindsight, of course it did—I was reliving the experience of the events that caused so much pain over and over again within my mind. My body didn’t know the difference and was responding to the threat like it was happening in the now.

This meant living in a state of fight-or-flight for the better part of my life. This state of chronic stress caused a number of physical and psychological illnesses that kept me perpetually trapped and suffering. Who wouldn’t go insane, or be debilitated, under that much pain and pressure?

Fortunately, I had caught on to my own mind and there was no turning back. I started to examine every uncomfortable thought, feeling, and belief. They began to unravel themselves. They were replaced by an inner spaciousness and deep, grounded sense of peace.

I began to feel grateful for the trauma memories, because they were like a perfect map to what I needed to look at next. And I had finally found a tool that worked to unravel them. A simple process that didn’t even require me to “let go,” but instead taught me to honor my pain and give it space to express itself.

As I unraveled my thinking, something magical began to happen. I stopped being a fuel source for the the malignant narcissists from my past. Instead, they became mine. Each emotion, thought, and belief that released me began to add fuel to my own fire—causing rapid healing and growth.

I shifted out of perpetual victimhood and into the warrior before you today. I began to trust the world. The reality around me shifted and life became utter magic and a joy to behold. Once painful beliefs became exciting to work with—like throwing another log onto the fire, I threw each limitation placed on me by the narcissist’s conditioning into the blaze.

As I burned through each false perception, I became more and more free.

Most importantly, free to become a limitless being and pursue the life I truly desire. To rise and shine my light out into the world and help others to set themselves free as well.

And, much to my surprise, grateful for every narcissist who brought me here—for giving me the fuel that brought me home to my true self. 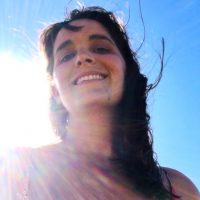 Janelle Brown is a writer and intuitive obsessed with the quest for true freedom. … Read full bio

A Psychological Condom for Online Dating: Don’t Feed the Narcissists. When the Narcissist is the Parent. I am the Toxic Person.
See relevant Elephant Video