You made a comment a few days ago that demonstrated just how ignorant and misinformed you are on the subject of mental health. You aren’t informed about who qualifies as mentally ill or “seriously mentally ill” as you so generously referred to the racist, violent, homegrown terrorists who murdered dozens of people in Ohio and Texas as such.

I (don’t) hate to let you down, but these people are not mentally ill. They are terrorists, hate-mongers, and violent men, and your willingness to label them as mentally ill shows how ill-informed you are about what it is truly mentally ill people do with our lives. So, I figured I should tell you.

Here’s a peek into the life of someone who has lived with obsessive-compulsive disorder, depression, and generalized anxiety disorder for five years:

Mentally ill people take 30-second showers, if they can manage the courage to take a shower, because they can’t be alone with their thoughts for more than that.

Mentally ill people lie awake at night, heart racing, brain-shut-down frightened that this is the moment they will finally lose it.

Mentally ill people run to the bathroom minutes after eating breakfast, lunch, and dinner (any consumption of food, really) to have explosive diarrhea. (There’s not an eloquent way to put it, and even if there was, I wouldn’t use it because nothing about mental illness is eloquent.) Their stomachs are so twisted food cannot be properly digested.

Mentally ill people cannot get out of bed on some days. Their limbs are too heavy; their brain won’t let them move, or sometimes, under the blanket is the only place they feel safe. So on those days, mentally ill people lay in bed, not wanting to die, but wanting to disappear, vanish into thin air because to live inside their own head for one more minute is unfathomable.

But you know what, sometimes mentally ill people do think about hurting other people. This is not premeditative ponderings and rolling over thoughts of murder. It’s fear. It’s one thought that got stuck in the brain that, because of Obsessive Compulsive Disorder, can’t get out. Sometimes the thought shows up when you’re spreading cream cheese on a bagel. You see you’re holding a knife and a thought appears, “What if you stabbed yourself? What if you stabbed someone else with this knife?” Do we do that? Of course not. We throw the knife into the sink and refuse to touch or even look at any sharp object until our fears shift.

Then, we’re driving our brother to the store to get some chicken to make dinner, and a thought pops into our head, “What if I run the car off the road and kill us?” Do we do that? Of course not. We signal that we’re pulling over, jump out of the car, demand our brother drives the rest of the way, and refuse to touch car keys until our fears shift.

Then, we’re sitting on the couch watching some movie with our dad, and someone punches another person in the movie and that thought appears, “You will punch your dad.” Do we do that? I’m sure you know it’s a no by now. Instead, we run to our room, lock the door, barricade ourselves in, sit on the floor, heart racing, thoughts screaming: I am a good person. It stays like that for a while.

Then, your sister comes into the room to get ready for bed. You’re on vacation so you have to share a bed with her, and when she asks you to turn the light off so she can sleep, you stop short. You have a thought, “What if you wake up in the middle of the night because you’ve lost your mind and you start to strangle your sister?” You turn the light off, but you leave the room, make a cup of coffee, and resolve not to sleep because what if that thought becomes true?

You pick up a book by the Dalai Lama, think about love, and read his words about kindness. You remember God, and go through the past 20 years of your life, reminding yourself of all the good you have done for this world, the people you love, and the space you have made in your heart for others. But sometimes it’s not enough. Sometimes the stereotype of that dangerous mentally ill person you painted so well wins.

What if that’s really what a mentally ill person does? What if we really are violent? Because according to the lies my OCD spews at me (and the rhetoric you spout from your fingers each day, Mr. Trump), that’s what I, as a mentally ill person should be doing. Yet unlike the homegrown terrorists who obliterate the lives of others in under a minute, I have a grasp of what is right and what is wrong; what is good and what is bad. Because I am so damn afraid of doing wrong, causing harm, and being a burden.

Mentally ill people already get annihilated by our own thoughts claiming we are terrible people. We don’t need someone without knowledge on the topic in our brains as well.

You want someone to blame, Trump? Look in the mirror. You’ll see yourself and the people behind you, who supported you, who lifted you up and put you where you are now. And maybe, you can even take a page out of a mentally ill person’s book by spending every minute of every day questioning your morals, actions, and thoughts. Spending each hour ruminating, analyzing, and obsessing because you want to cause as little harm as possible in this delicate world.

Start there, my friend. Take a page out of our book. Fix yourself. 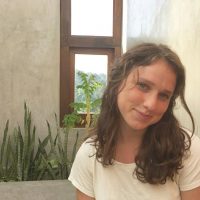 Kelsey is the founder of Femislay, an online platform for feminism, self-care, and mental health. When she’s not sharing her feelings on the internet, she’s studyi… Read full bio

Shame is Bred in Silence: This is what Depression looks Like. Depression is not who you are. Love Is.  Eight Nutritional Deficiencies that can Cause Depression & Anxiety. How I made Friends with my OCD. ~ Sophie Haber This is What it’s Like to Live with Borderline Personality Disorder.
See relevant Elephant Video