Rituals: Moving through Grief after my Husband Passed Away. 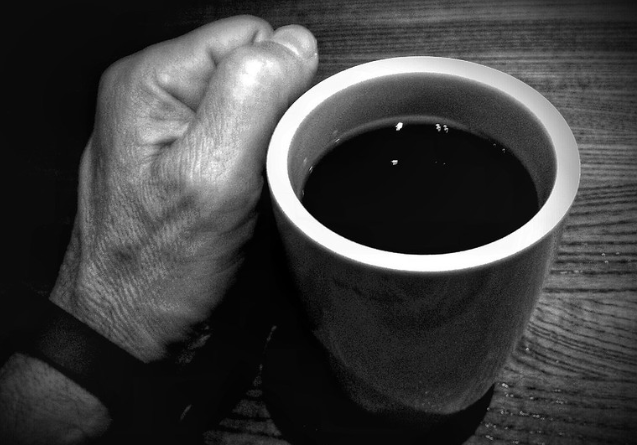 I’m going to throw the coffee pot away.

The thought came fully formed, like an epiphany as I was hurrying to get the kids loaded in the car and to get the little messes—piles of mail and phone cords and remote controls—out of the way, so the woman hired to clean wouldn’t have any obstacles.

I bet there’s still coffee in it.

The trickle of aggravation, which came from this revelation, accelerated with each step across the split brick floor and to the smooth, granite countertop. My fingers closed around the handle of the stainless-steel carafe. I slid the pot off of the base and shook it gently. Weighty liquid sloshed back and forth, licking the inside of the container. Fury flooded and froze in my heart.

In an instant, dozens upon dozens of episodes where Sean’s dad would make coffee for himself and not clean the carafe. I thought of the half-empty cups of coffee I’d find all over the house. I thought of the microwave with the timer still flashing because he stopped it without clearing it (this drove Sean nuts).

I thought about the time Sean used a knife to open a can of condensed milk that later spilled thick, heavy cream down the side of the counter, into the cutlery drawer, onto the cabinets, and then drip, drip, and puddled on the floor. I thought about how he lied about using the knife because he put it back in the knife drawer after using it. I knew it was a lie because when inspected, the knife had a film of condensed milk dried on the tip, evidence it had previously been used to pierce the milk can’s lid.

I thought about the abandoned coffee cups left around our yard or on top of our trash cans outside, how absurd it was that they couldn’t just be thrown away, that they were left for us to do.

I thrust the coffee pot back onto the base of the maker, ripped the cord out of the wall, and shoved the maker to the center of the counter. I went back through the garage to the yard and wheeled the trash cans to the curb.

I was deriving ferocious satisfaction in knowing that if I threw away the coffee pot, there was no way I’d ever be saddled with cleaning month-old coffee out of it again. Cleaning up someone else’s mess. There’d be no need for coffee creamer or for a jar of sugar, which he’d always dip a spoon dripping wet with coffee into, a spoon that after stirring the sugar into his coffee, he’d leave to create a puddle that would dry into a stain that I’d have to scrub up on the counter.

Yes, I would never have to clean up after him and his coffee again.

I strode back through the garage and into the kitchen but stopped short. The sight of the lone coffee pot sitting on the bare counter awaiting its fate—to be disposed of—as if it hadn’t borne witness to some of Sean’s and my most intimate and pleasurable mornings together. As if it hadn’t provided us warm mugs to share cozy conversations and lazy Saturdays cuddled on the couch together.

I watched the ghost of my past self fill a measuring cup with cold, filtered water from the refrigerator. Six cups in all. I watched her pour them into the top of the coffee maker. She took the small $15 grinder out of the corner cabinet by the dishwasher, filled it with beans, and pressed the button. The grinder whirred, grating the beans into grounds. She padded to the cabinet above the microwave and pulled out a cone filter. Those cone filters could be so hard to find sometimes. The filter was tucked into the top of the coffee maker with the same soft handedness as she’d use to swaddle her babies when they were still babies. She poured the grinds in and then closed the lid and started the pot.

Cold, filtered water, she’d explained to Sean, made for a better cup of coffee. It was the smallest details that if you took care to attend to them, she believed, that made the difference in making something so ordinary as a cup of coffee into an extraordinary experience.

When it was ready, she poured his coffee and carried it to him on the couch where he’d be sitting, a cap on his head, now bald from the chemotherapy, and a blanket on his lap because he’d gotten cold from the protein smoothie she’d made him. He gratefully accepted the coffee and sipped it. The little slurping noise that used to drive her nuts—she really does have that condition where food noises make her crazy—didn’t bother her, not a bit, anymore. He was doing well with his therapy and would hopefully be in remission soon, but certainly, at this point, it was obvious that some things really didn’t matter.

The ghost disappeared. Slowly, I approached the coffee pot like it was a wounded friend. I knew I would never make coffee like that for Sean again. Never. There was no point in keeping the coffee pot. I had no intention of cleaning the month-old coffee from my husband’s funeral out of the carafe.

I carried the coffee maker to the garage and put it beside the column between the two bay doors. Then, I waited. The steps it would take to get to the trash cans outside were few, but the journey seemed too much at that moment. I wasn’t ready.

As I drove the girls to school, I remembered that the top of the lid was a little broken. It didn’t open and close the way it used to. It was broken. That was what did it. The finality of the decision was made because it was broken.

I got home from teaching that Wednesday night and walked over to the coffee pot. I lifted it off of the garage floor and carried it to the trash can. I opened the lid and carefully set it inside and then closed the lid. I felt hollow walking back into the house.

But I do still mourn the ritual, even as I practice my own ritual with the French press. The stainless-steel whistling tea kettle was a random wedding present. I fill it using the pot filler by the stove. The gas ignites and when the water boils, the kettle sings. In the meantime, I grind the beans. Tanzanian peaberry is my favorite. I measure their weight on my kitchen scale then empty the grinds into the press. Then goes in the boiling water, and finally, the plunger. When it’s ready, I push the plunger down leaving only dark, rich, fresh coffee that I fill my beloved Storyteller Agency mug with.

Sometimes, I’ll get the organic heavy cream out of the refrigerator and add it to the cup. The little spiraling stream of white liquid spreads and swirls in the coffee creating abstract patterns that transform the color from a rich reddish-brown to golden tan and then pale beige. I stir them together, muddling the patterns into a new solid hue. When savored, the cream cuts through the coffee’s acidity, allowing the nuttiness to blossom on the palate. The mug is a conduit for the drink’s heat, and my fingers are pleased by its warmth.

With the French press, there is only ever enough coffee for two cups, and who doesn’t always drink two cups of coffee? So, I’m not wasting, which is a small pleasure. This has become my little ritual for one. A private and contemplative practice where I explore my most intimate thoughts, feelings, hopes, and fears before remembering to stop and enjoy the coffee, to take it one sip at a time. 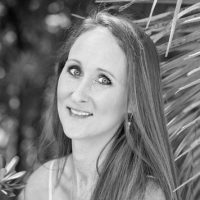 Amy Delcambre is a writer and editor from Mobile, AL whose creative nonfiction works primarily focus on her grief journey as a widow, bereaved mother, and newly single mother.… Read full bio

What I Learned about Love after my Husband Died. 78 Days of a Widow’s Grief. What to Do with the Grief no one Wants to Talk About.
See relevant Elephant Video