I Want to Know How it Feels to not Give Up.

My garage is full of shiny aluminum panels and tools sitting on card tables, because my boyfriend has decided to build an airplane.

This is not a model airplane.

As I hear the air compressor starting up again or the dull roar of the grinding wheel, I wonder how he manages to commit to such a large project.

How can he stare down drilling 500 holes in sequence without giving up knowing that it is just one step on one build plan in a whole book full of build plan pages?

To answer this question, I interviewed him and a friend.

My boyfriend Matt is building a Van’s RV-14A, and his friend, Steven, is building the similar, but slightly simpler, RV-12.

Admittedly, building was not a decision that either of them came to lightly. I distinctly remember a 400-page textbook on aircraft building that Matt meticulously read for months. We also attended a class that taught us how to rivet, manipulate metal, and remove the rough edges from the factory (“deburring”).

Steven admitted to obsessively reading another person’s blog about building an RV-10, the four-seater version of their two-seater airplanes.

He has spent three years following this “flying family.” It took both of them a while to convince themselves it was even possible for either of them to build an airplane.

If it were me, the budgeting, the details like where to paint parts with toxic primer, and staring down 1,000 hours of build time would stop my project before it started. Yet both men seem to be motivated enough to face down the obstacles.

Steven says that he is devoted to knowing the machine inside and outside and likes the idea of a new airplane at a reduced cost. Matt adds that he likes to build things.

Even in the loud bar where I’m interviewing them, I can hear the glimmer of hope in their voices when they talk about why they’re building.

“There’s nothing more rewarding than flying the airplane you’ve built.”

The eventual promise of flying seems to drive them. The promise of the blogger’s “flying family” captivates Steven. Matt often reminds me where we could fly within a day “when the plane is done.”

As we talk, they dissolve into an excited conversation about how to hook up a flight simulator to a half-assembled airplane. They want to pretend to fly the plane before it’s done.

But I’ve seen frustration stump both of them.

About two weeks into the start of Matt’s build, he decided that his dimples were not right. With riveted parts, you need to dimple the metal around the holes so that your flush rivets lay flat. Matt spent hours looking over his dimples, catching the light to see if the area around the hole was warped or not. Hours of examination and YouTube videos later, he decided to use a different tool and continued the build.

Steven has also shown up at our house with a distorted piece of metal that didn’t have the proper countersunk holes in it.

They’ve both reordered parts that they’ve messed up. They’ve both taken breaks for up to a week to let the frustration simmer.

Yet they’re both still pressing forward with the builds.

If I attempted a project of that magnitude, I expect that I would have thrown in the towel at week one.

On my computer are two half-finished novels, a dozen essays that “just need another edit,” and an anthology of unfinished poems.

There’s no promise of flight to lure me to the finish line. There’s no “building buddy” to complain to about countersinks and dimples. There’s just me and the mountain of words that I want to create.

I always seem to stop in the foothills.

So, I’m watching my friends with unbridled curiosity.

Confused by my enthusiasm, the two men have told me endless tales about the technical background of what they’re doing.

What they don’t seem to get is that I’m interested in the mental process.

I’m fascinated by how Matt sits down to drill 500 holes knowing that there are thousands more to come. I want to know what motivates Steven to deburr yet another part in a long succession.

I want to know what it means to not give up, and of course, I want to see the day when both finally get to fly their planes. 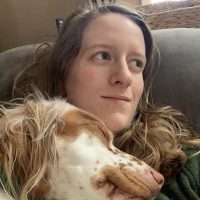 After attempting to be an aerospace engineer and program manager, Kaitlyn decided to go back to writing because it was more fun. She is devoted to writing, her dog, and hiking… Read full bio

Living our lives with Passion: 5 lessons from a Dying Friend. So you still haven’t Discovered your Passion & Purpose in Life. What if I have no f*cking idea what my passion is?
See relevant Elephant Video