If you Have to Cling to Something, it Wasn’t Meant for You.

I’ll never forget the words offered to me by the father of my very first boyfriend after we broke up.

As far as I was concerned, this boy was my world. We would make it through the long distance after I had moved halfway across the country. We would get married after school and have lots of babies, and let the rest be history.

He fell in love with someone else, leaving me to face the big bad world without him. At 15, that was pretty scary. Needless to say, I was mortified. I was lost in gory love songs and silent hope, my poor mother having to deal with the mess that I found myself in.

The one piece of advice that stuck with me was when his father told me: “If you love something, let it go. If it comes back, it was always yours. If it doesn’t, then it never was.” At that, I did my best to let go.

I say “let go” loosely, because at the time I was secretly hoping that he’d come back.

He married that girl, they got a dog named Butch, and they’re living happily ever after. And they’re absolutely perfect.

Do you see the beauty here? How letting go can exhilarate you? How once you let go, you will always find something better?

No doubt it was difficult for him to let go, too. I was, after all, his first love. But he had something pulling him in a direction that he knew would change his life forever. And he let go of the beautiful relationship he had, so that he could allow himself to be open to the wonderful that was about to become.

My journey since then has been incredible, and full of lessons. I won’t lie, it took me a while to grasp this “letting go” thing. And it’s fear, really. We are so petrified of losing, missing out, lacking. We are holding on so tight to people, possessions, preconceived ideas of what we think should be that we are completely strangling any possibility of something new.

Let go of your fear. The more you do it, the easier it gets. Because it’s not really yours anyway. You don’t want it, or need it, and you will never have a use for it. Much like the boxes of inanimate objects that you’re “Sure you’ll find a use for.” No. Stop hoarding. Stop harboring your emotions, your freedom, your truth. Let go.

Humans are hit with the same lessons over and over, until it finally sinks in and we actually do something about it. Much like learning to surf, you will fall and bail and be engulfed by the ocean, until one day you go, “Oh! That’s what I’m doing wrong!” And then you do it differently, and suddenly you are on the way to riding barrels and feeling the freedom of gliding along the ocean waters.

My lesson hit me so hard, I didn’t have a choice but to wake up and smell the roses. For my 21st birthday, my parents went and had custom-made the most beautiful dreamcatcher belly ring. (If you know me, you’ll know the connection I have with dreamcatchers, so this was insanely cool.) Worn with pride, love, and all the heartfelt sentiments that you can imagine. Then one day, all of a sudden, it wasn’t there anymore. Fallen out, somewhere along the way. I just looked down, and it was gone.

Gutted. Guilty. Dragging my feet to break the news to my parents, I desperately needed this back. We searched far and wide. Beds, couches, gardens—I even scanned the streets as I walked through town, hoping to glimpse its sparkle.

Weeks went by, and no dreamcatcher. I had to replace it with a boring, old (pretty, nonetheless) green studded belly ring. One day, my mom and I were talking about it, and I eventually tossed my hands in the air and said, “You know what, I need to actually just let it go. It belongs to the Universe now, and that’s that.” And so I did.

A week later, my father passed away. (A topic for another blog, but you can imagine the impact.) With millions of different thoughts scrambled in my head, I was sort of numb for a few days. On the third day, being a runner, I took my dog, and we went running. And we ran and we ran. And we ran. Every step, I felt a release. Every breath was like breathing hope. Something had to give.

In that moment, something deep inside told me: “Stop.” As that happened, I glanced to my left and saw the most amazing orange light radiating through the trees and lighting up everything in its path.

I didn’t have a choice but to halt the momentum and pause the adrenaline pumping through my veins. I took it in and looked down into the happy face of my Staffie, tongue lolling out the side of his mouth. And there, between his legs, was a glint of pure sterling silver that I recognized and loved as much as the soul that surrounded it.

At that, I broke. On my knees, I broke. Sounds that I never thought possible came out of my chest, breaking barriers. I sobbed and cried, and dripped snot everywhere—here it all came from and how quickly it came genuinely surprised me.

But I wasn’t crying just because I found my belly ring. Yes, that was awesome; but what struck me solidly was just how fluidly the Universe gives and takes. But it can never give back unless you are willing to let go in the first place.

And almost as quickly as it started, it stopped. I became present, standing with my hands on my hips, gazing up at the sky and saying, “Thanks, Dad.” Because I knew that from there, it would all be okay.

We are always okay.

At that, I heard a laugh climb through my throat and out my mouth. Because it really was funny. The goo on my running shorts, my dog waiting patiently at my side, and me talking to the sky. It felt great. I felt lighter. I felt like I could carry on with my run and get home again, without the ton of bricks that I was carrying on my back.

And so I did. I walked through that door, puffy-eyed and excited, brandishing my found treasure in my mom’s face.

“Look! It came back!” I exclaimed.

“Yes,” she replied. “Because it was always yours.” 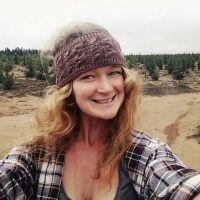 Shannon Smith is a Free Spirit who thrives on adventure. She has a background in health and wellness, and a passion and extensive experience in the events industry. Writing ha… Read full bio

5 Ways to Cut “Soul Ties” with your Ex—& Finally start Moving the Hell On. Daddy’s Girl: Coping with the Loss of the first Man I ever Loved.
See relevant Elephant Video