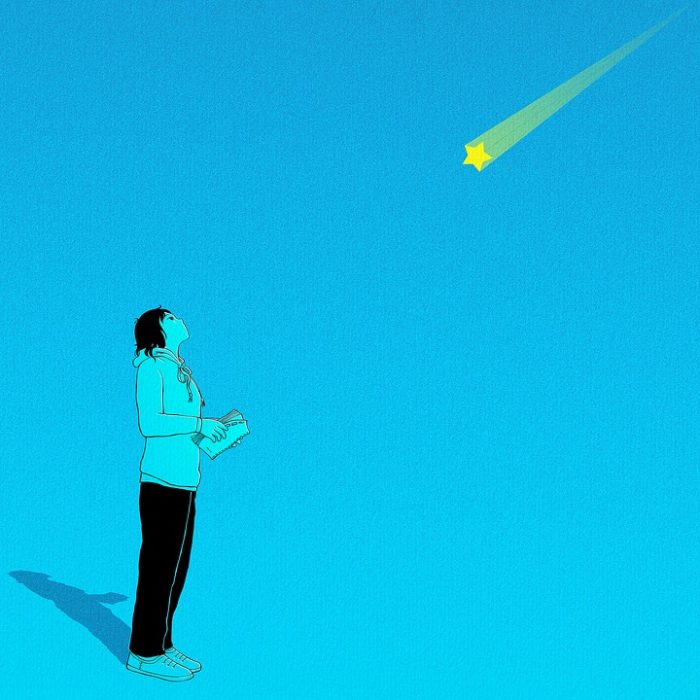 The Perseids meteor shower occurs every year around this time, and peaks in the first weeks of August.

Debris from the Swift-Tuttle comet lights up as it hits our atmosphere, and at its peak, can display up to 60 flashes an hour.

My favorite memory of this event was the year my grandpa died.

The peak occurred just two weeks before he passed away, though he had been in the hospital for a long time at that point, and our family had already made two last-minute dashes to the hospital, believing it was the last time we’d be able to see and hug him. On top of that, I was getting grief at work for rushing away to the out-of-town hospital for this, and I was broke and still trying to juggle single, full-time motherhood.

I was stressed, and exhausted, and anxious, and I needed to just find my breath.

So, that night, I got myself out of the city, sat on the hood of my car, and just watched the sky. It was peaceful. The weather was perfect, the air fresh. The insects were buzzing; the long grasses danced in the breeze; and together, they provided an end-of-summer, white noise ambiance.

The show was spectacular. I don’t know if that year, 2010, was better than any others, but the meteors were streaking constantly. I wished on every single one, even the ones I only thought I saw out of the corner of my eye. And in the distance, a massively beautiful storm was brewing—big, puffy light and dark clouds filled the horizon; the lightning contained within made it a visual symphony, and the rolling thunder added to the nature-y soundtrack.

That night, I was both heartbroken and filled with magic. Alone and connected. A tired, single mother who was still bursting with potential. Storms to the left of me, comets to the right, and I was fully present and open to all of it—and I will never forget how I felt.

I wish that kind of experience for everyone.

I don’t really believe in signs, but that night left me with the most comforting sense of “everything’s going to be okay” that I’ve ever felt before or after, and I carried it with me when my grandpa—one of my most favorite people in the world—left us.

So, tonight’s the night for another shower this year!

(As long as the weather cooperates. And if it doesn’t, there’s always tomorrow, and the next day…up to a week after today, you’ll still catch glimpses!)

Tonight is the peak. Wednesday and Thursday night will put on a decent show too. Ideally, aim for viewing in the pre-dawn hours. At least after midnight, though, for those who still have to work the next day. Next year, you can start catching the show up to a week before and after the peak, so pop it in your calendar as a recurring event.

Light pollution will ruin the show. You need to get outside of the city, if that’s where you live. Even small towns have too much light these days. I’ll be heading out past the city limits to a spot I’ve sourced out before—20 minutes away, a back country road with enough room to pull over safely (my spot actually has an entrance to a field right off the road). Be safe! Take someone with you or let someone know where you’re going and stay in touch. And watch out for wildlife!

Bring what makes you comfy. You’re going to be looking up for a while and it’s going to get cold, and you might get thirsty, and you might want a snack. Midnight picnic and lawn chair and blanket? Maybe a pillow for that sore neck? Perfect. Maybe chill on the coffee though, and stick with water. (Reusable bottles, please!) It’s a long night, you’re out in the boonies, and peeing in the bush is one thing, but squatting in the dark when you’re not sure what kind of poisonous leaves are touching your bums, ladies, well that’s entirely different.

This year the moon is half full, so it might impact the light show a little. It won’t be as dull as a full-moon year, but not as amazing as a new-moon year. You can also check for what time the moon rises and plan accordingly. In my city, the moon starts appearing over the horizon around midnight, so it’ll interfere a little.

Put your cell phone away. First of all, your eyes need to adjust to the dark to see better, so you don’t want to be looking at a screen. And anyway, now’s the perfect time to disconnect, find some calm in your head, zone out, meditate, or maybe even think through a problem you’ve been avoiding. It’s almost a relief to have to put the tech away.

Bring a soundtrack! Music without lyrics is ideal—but whatever suits the mood. (Try not to use your car as the sound source—you don’t want to drain your battery, and car lighting will dull the view, too.) I’m a big fan of some simple classical or contemporary piano when it comes to background music. This is one of my all-time favorites.

Leave the pets at home where they’re comfortable and safe. It’s no fun trying to console a shivering dog, or one who wants to chase every pair of eyes in the bush.

Even if you’re not an astronomy enthusiast, I can’t think of a single person who’s indifferent to a shooting star. Whether you’re wishing on one—or 60, with any luck—or you’re just using the time to take a break from the craziness of everyday life and clear your head, get outside and look up.

Wish Upon a Star: The Perseid Meteor Shower Might Just Change Your Life. {August 11} If You Feel Like You Don’t Belong—You May be a Starseed.
See relevant Elephant Video