What Others’ “Truths” Teach Us about our Own.

A couple of years ago, I went to a workshop in London called “Self-Esteem vs. Self-Acceptance.”

I flew to London not sure what to expect, but was excited to be attending this international seminar. I stayed in that excitement until a couple of hours into the workshop, at which point my excitement turned to nervousness.

It was a relatively small group of people (about 30), and as various participants raised their hands to speak, my nervousness grew. The other participants were incredibly bright, asked insightful questions, and made well-observed points. In fact, every single person who opened his or her mouth blew me away. They seemed solid and fearless, and I was certain they were stellar therapists, coaches, and doctors. In other words, they had it all together.

Being a relatively new mental health counselor at the time, and probably younger than anyone in the room, I tried not to be intimidated, but found myself comparing my knowledge base and intelligence to everyone else—and not in a flattering light.

Feeling less-than, I reassured myself that I was young and had time to catch up. Afraid that any question I might ask would reveal my lack of knowledge or inferior intelligence, I gave myself permission not to speak at all. Besides, I was there to learn and absorb; I would just sit back and take it all in.

This worked well for most of the workshop. But toward the end of the three days, the two facilitators handed out Post-it notes—those little yellow sticky notes you use as reminders to stick on the fridge or in a book to mark an important passage. The facilitators asked us to each take a Post-it and to write down one thing about ourself that we didn’t want anyone else to know—some self-judgment we had that we preferred to keep hidden, a quality we wished we didn’t possess.

As soon as I had pen in hand, my heart began racing and I started censoring myself, even before I’d begun to write. I’d made it most of the way through the workshop without making a fool of myself, and now I was being asked to write down the very thing that would make me feel most like a fool. It was not yet clear where we were going to be asked to stick these little yellow confessional notes, but I had a feeling it was not going to be anonymous.

Zeynep, I asked myself, are you here to learn and grow or are you here to hide? Although I was tempted to write down something a little less risky than my darkest secret—something only marginally confessional, like a perfectionist or anxious—I knew deep down that I was going to have to be bold to really get what this exercise had to offer. I had to take the risk of total honesty and participate fully. To deeply understand my clients, I needed to deeply understand myself.

So with a hesitant hand, I wrote down the words: I am stupid.

When the facilitators instructed us to stick the note onto ourselves, onto our own bodies, I had a shiver of regret. I was about to reveal to a room full of capable, self-assured people that I was at heart an unintelligent human being, that I was inept and unfit to be a therapist, unable to fix even my own issues. This weekend had gone so well, and now it was going to slide downhill fast.

The next instruction was to wander around the room to view the notes everyone else had written about themselves, to refrain from speaking, and to silently acknowledge the person whose note we’d just read.

As others began to rise from their chairs, I sat for a moment, looking at what I had written. Then I stuck my yellow note to my torso, between my heart and my stomach—the place where I feel most of my anxiety. Slowly I stood and took a breath, ready and not so ready to reveal this ugly little secret to a room full of strangers.

But something happened as I began slowly to walk around the room. The knowledgeable, self-confident people who’d dazzled me all weekend began melting before my eyes into normal human beings—vulnerable, beautiful human beings. “I don’t know enough,” one person’s note said. “I am fat and ugly,” said another. “I’m not stable enough to be a therapist,” said a third.

Tears burst into my eyes, and I read the rest of the sticky yellow confessions through a watery blur. “I’m a failure.” “I’m obsessive.” “I’m unlovable.” “I’m a fraud.”

All of these people I had viewed as brilliant and self-confident walked through their world hoping no would find out their dark “truth.”

Because we were asked not to speak, no one tried to talk anyone else out of his or her belief. No one said, “Oh, you’re not ugly,” or “But your comments have been brilliant,” or “You were courageous enough to come here, weren’t you?” We just silently held each other compassionately in our gaze and witnessed the dark shadow each of us had been trying, for most of our lives, to hide. If we had been allowed to speak, what I really would have wanted to say to each and every one of these people was, “I understand.”

When we had all finished the exercise of walking around the room with our yellow Post-it labels stuck to us, there was a potent silence in the room—that kind of silence that is full and still. Some people were crying silently, and my eyes were meeting with surprised looks across the room. No one was running away; no one was avoiding; we were just being in the present with all that was. And a sense of compassion filled the space between us all.

What we had all experienced in that workshop was a defusion from our once-hidden labels. No doubt our labels were still there, but we could now see them for what they were. They had become as flimsy as the yellow Post-its we’d written them on. We had literally moved our labels outside of ourselves and viewed them with a bit of distance. We had seen that we were much more, much vaster, than what we’d believed ourselves to be at the start of the seminar.

This was what I took home with me from that workshop in London, the gift of possibility, the gift of space. For me the gift was a little more space between me and the self-story “I am a stupid person.” I also took home a crystal clear view of how seeing our labels for what they are can give us a tremendous feeling of freedom.

From that awareness, so much more is possible. 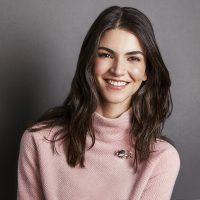 Zeynep Selvili didn’t grow up wanting to be a mental health counselor. Early on, she had her heart set on becoming a belly dancer. Later, she was sure she wanted to be a vet… Read full bio

How I’m Finally Releasing Self-Judgment at 61. Freeing Ourselves from the Trap of Unworthiness.
See relevant Elephant Video