Macho Men need to Stretch Too: How a Yoga DVD Changed my Life. 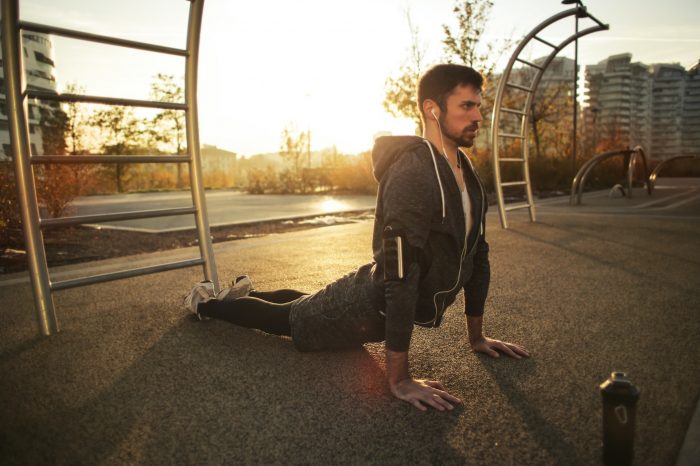 If my math is correct, she is somewhere between 60 and 120-years-old, but still moves and looks as if she stopped aging around her 38th birthday. Her workout videos span decades and have evolved from high-octane 80s aerobic routines in full-body Lycra suits, aimed at helping moms everywhere achieve buns of steel, to the more earth-toned Zen yoga sessions of the early 2000s—the period our relationship began.

At first, I wanted nothing to do with Denise, or, for that matter, yoga in general. My girlfriend at the time would take breaks from her long slog medical school study sessions by working out to a Denise DVD on her laptop.

I was also a student, albeit on a much more intense and highly lucrative path as an English literature major, and on days when I could afford to take a breather from doddering around in my underwear and reading 20th-century novels, I’d watch my girlfriend and Denise do their thing.

There was something pleasant, even soothing, about Denise’s voice guiding my girlfriend through downward dogs and peaceful warriors, but for months, I never once joined the party. Yoga wasn’t for me, or any self-respecting man; it was strictly for women, I decided—just like reading Jodi Picoult novels, watching “The Ellen Show,” and getting manicures.

Looking back, it’s not hard for me to trace the origins of my resistance. My dad is essentially Rocky Balboa’s twin brother. If his lower back wasn’t wrecked from his years as a plumber—yanking boilers and water heaters in and out of homes—he’d probably still be being going on pre-dawn jogs, shunning our modern sweat-wicking workout gear for Champion sweat suits, regardless of the season.

He’s an old-school, macho man—just like his dad. Actually, I think his dad was even worse. Two of my most vivid little boy memories of my grandpa were him cracking a breezy crocodile grin as I took him up on his challenge and began punching him in the stomach, repeatedly, using all the force my 75-lbs. frame could muster. The second memory is of him warning me to never leave my weapons unguarded after he saw my yellow wiffleball bat on the front steps.

The point is, I come from a long lineage of macho men, and as a kid, I often watched my dad ignore his crippling injuries and push through. Legend has it that my first words as a baby weren’t dada or mama but instead, “I pulled my back out, but I’m going to keep working anyway!”

Until recently, I was a mirror image of my dad and viewed real exercise as a masochist: I had to be limping from knee pain for a run to really count, and if I wasn’t slightly woozy from grunting through a weight-lifting session, then that session was weak and soft—a pathetic waste of time.

Maybe I’d still be that macho man if it weren’t for the string of physical failures that deeply scared me, the weeks when the darting pain in my knees became so sharp I couldn’t make it down a flight of steps without breaking into a cold sweat. Of course, as a bona fide macho man, I repeatedly tried to put these injuries in their place with a toxic mixture of sheer force and mulish obstinacy.

I’m just going to keep running, I’d tell myself, and when that proved impossible, I’d slow it down to a brisk walk, wincing all the way home, cursing at the emergency alarms wailing for me to stop and change.

This is where I’m supposed to reveal the blockbuster epiphany, the moment when I finally humbled myself to Denise Austin’s wisdom. I wish it was that quick, but it took years for me to fully allow yoga into my life.

Over time, I began to admit I was no longer enjoying my body as I had through my teens and 20s—that glorious period when, bulletproof with the magic of youth, I barely registered the smorgasbord of broken bones and torn muscles. That bulletproof vest was long gone, and I was now in a new phase of constant pain. My body was a machine I could no longer trust.

Out of desperation, I found myself on the mat more frequently, letting Denise show me how to protect my knees and stretch my IT-bands with those delicious hip-opening poses. The results were immediate and stunning. Who was this stretched-out, rubbery-loose man, free of pain? And what was this conscious breathing all about?

I wasn’t just healing my knees, I discovered; I was learning how to be calmer, more serene, all thanks to a DVD that probably came from a T.J. Maxx bargain bin.

I’ve since moved on from Denise and am now a regular at yoga classes here in Miami. The macho man inside of me has quieted immensely—a stranger I rarely hear from—but I can still spot them out in the world with 100 percent accuracy.

For instance, these days, I’m a college instructor and I always know which of my students are macho men within the first 10 minutes of class. There’s that chest-out-peacock-ness to them, that baller swagger, that hardened stony face they’ve surely perfected in front of a mirror.

Sometimes I wonder how many injuries, both physical and emotional, all that swagger masks. Sometimes I wonder if their knees hurt. And sometimes, I’m tempted to teach them something other than 20th-century novels.

So, who knows? If the world ever reopens, and in-person classes ever safely resume, I might start slipping Denise Austin DVDs on top of their graded papers.

“Check this lady out,” I’ll tell them. Give her a shot. She may just change your life. 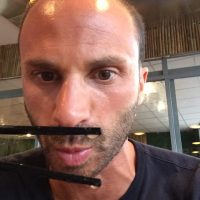