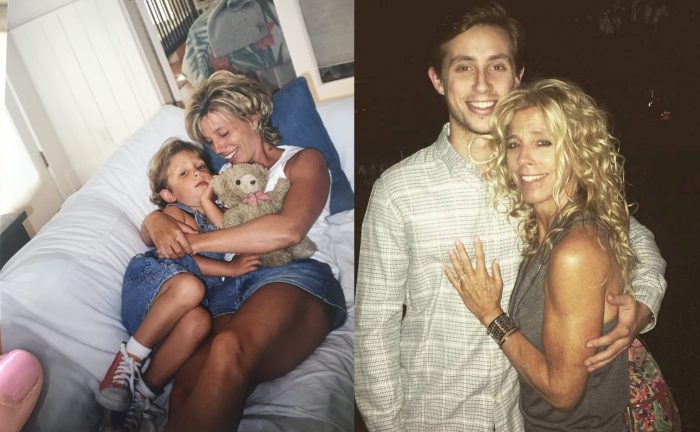 I remember getting a call from the infirmary at University of North Carolina at Chapel Hill.

They notified me that my son, Dylan, had been admitted. It was his sophomore year. He was 19, so they weren’t permitted to tell me why because of HIPAA laws. Did he break a toenail or were they giving him his last rites? I was out of my mind. Now, he is 27 and has his own insurance. I wouldn’t even be his first phone call.

I remember sitting next to Dylan at SunTrust as we closed all of his bank accounts because he was moving to San Francisco. It was as if the doctor had just cut the umbilical cord all over again, without numbing cream. Now, I breathe a sigh of relief that it’s one less thing for me to be in charge of.

I remember a phone call Dylan received while on Christmas break during his freshman year. I overheard him telling a friend he was “heading home,” and by home he meant Chapel Hill. It cut like a knife, and now I quietly chuckle.

I remember when Dylan moved to Mountain View after graduation. He insisted on going alone. Nobody was waiting to pick him up at the airport. His furniture hadn’t arrived, so he slept on the floor. He insisted on doing it on his own. I was deeply hurt, then I made peace with it, and now I want to high five him and say, “Atta boy!”

I remember holding on so tight to the “Rosenberg Four” that it hurt my fingers. And now I giggle with glee knowing there’s a fifth. We already had a spot for her at the kitchen island, and the rest is icing on the cake.

I remember the first time I thought about Dylan missing a holiday here, and my stomach ached. It felt empty. This year, Dylan spent Christmas with his other family, the Hiltys. They have holiday traditions of their own, which he is included in. They FaceTimed me while opening our presents. I am thoroughly convinced they love him as much as we do. Instead of Christmas this year, we are celebrating the Joy of January. The cherry on top is that we got to be at the epicenter of Operation Engagement, which we were honored to have take place on our anniversary.

Last night, I woke up in the middle of the night to go pish. Kitty nuzzled up to me, and I scooped her up. I laid in bed thinking about how delicious life is right now, as she purred. Eventually we nodded off into dreamland.

I remember, years ago, living through countless nights of sheer terror—I couldn’t sleep. I was suffering with anxiety, and there were nights I never even closed my eyes.

As I was holding a newborn Dylan in my arms, I remember saying to my mom, “How do parents ever stop hugging their babies?”

Now, I totally get it.

The universe steps in and navigates their path. Sometimes, the flight is smooth and other milestones feel rather turbulent. Eventually, we find our way to a perfect landing.

I struggled at times with feeling whole as Dylan moved away and fell madly in love with San Francisco and with Gracie. I wasn’t sure where I fit in, or if I even did. And now I am wrapped up in the feeling of total happiness for “Dylan and Grace.” Having them here under our roof has really given me the opportunity to peek into the beauty of how they operate. They are equally brilliant in their own right, and when they put their heads together, anything is possible. They are quite accomplished in their careers and work at home together with ease. They are future business partners for life. They problem solve without the slightest bit of friction. They play card games “to the death” and challenge each other to be more.

They bring out the absolute best in each other without even trying. They are delightfully demonstrative in their affection for one another. Sure, they look good together, but the way they look at each other says it all, without uttering a single word.

There is so much excitement in our lives right now. Eliza, my daughter, is moving to Miami in August, and Dylan and Grace are “official.” I have trouble sleeping now, but it’s because I’m buzzing with anticipation. I’m grateful for every hiccup—even the ones that turned into full blown seizures—that the Rosenberg Four found their way through the last four years. Some days, I was full of grace, and other days I stumbled.

I remember when I thought 2020 was the worst year ever—until 2021 started kicking my ass.

This year has shaken us up and added a new layer of suffering to those already in the fight of their life. It is important to shine a light on each and every silver lining. I am blessed that they are in abundance at the moment. In the end, all we have is the moment.