What it Means to Show Up for Life Despite it All.

The musician Ralph Stanley had a singing voice that was truly unique in every sense of what that word means before we started to overuse it.

An article that was published in the New Yorker described it as a “force of nature” and “otherworldly.”

In his biography, Stanley tells the story of how he knew as a little boy that he had a special voice, and being a religious man, he saw it as a gift from God. He wanted to share that gift by singing in church. But every time he even thought about singing in front of others, his palms started to sweat and his mind started to race.

We could have diagnosed good ole Ralph with performance anxiety.

When he finally built up his nerve to sing on Sunday, he said that his knees were literally knocking together as he walked in front of the tiny congregation in his little mountain community in rural Virginia. His heart pumped excessive blood throughout his body, and his lungs expanded and contracted quickly so that he would be equipped to fight or flee from this imminent danger.

However, Ralph’s body and mind were confused as there was no danger; there was just Ralph about to do what he loved to do—to sing.

Finally, the time came, and as he opened his mouth, the words started to come out. Shaky at first, but then it leveled off and his talent took over. In that moment, Ralph said he learned the first big lesson of his music career: you can be absolutely terrified and still step toward that which is meaningful.

Willingness is what Ralph displayed in the moment. He was willing to feel the emotional pain of the moment while doing something that brought him a sense of purpose. If he would have waited to feel calm, confident, and anxiety-free in order to perform, he would have died waiting. Instead, he acted his way into feeling.

He began to sing, and the panic subsided as his body and mind relaxed and realized it did not need all that adrenaline or cortisol. As they say, “You cannot panic forever.” Eventually, the alarms of the body and mind subside and you find yourself doing that damn thing.

When I look at the lives of my clients (and my own), there are usually two areas that shine a light on suffering. The first is the stories the mind creates that are being blindly believed. The second is the things they’re avoiding and what it is costing them.

It’s usually a case of choosing short-term comfort over long-term contentment. We make the easy choices that lead to a harder life, as opposed to feeling the discomfort in the short-term for the long-term gain.

For example, when craving, which is a form of emotional pain, arises, we may easily give in to that craving instead of willing to ride that sh*t out.

Or say we are being taken advantage of at work. We want to be assertive and address the issue, but of course, that is often uncomfortable. Instead, we choose to “keep the peace” or avoid “rocking the boat,” which often means that we choose avoidance and passivity while letting ourselves continue to be taken advantage of.

Here are my ideas that can help examine our avoidance and strengthen our willingness muscles:

Ask yourself, “What am I avoiding and what is it costing me?” If it’s something inconsequential, like avoiding gory movies because they make you squeamish, then no big deal. However, if it is costing you in the area of purpose, then start to get a little pissed off about it and build some intrinsic motivation to be willing to feel “x” because of “y.”

Usually, the culprit of avoidance is the illusion that you are supposed to be able to control your emotional weather. Once we understand that the body and mind will mostly do whatever it will do, regardless of our own preferences, then we can decide how we are going to respond to it. Are we going to recoil every time it gets a little quaky, scratch the itch every time it craves something, or go to sleep every time it feels sad? Or are we willing to feel all of this sh*t and step toward what we want?

Intentionally seek out discomfort and sit with it for a while. This is how you get stronger and better at this skill. Life will present plenty of opportunities, for sure, but build in a few of your own. Take an ice-cold shower, fast for 16 to 24 hours if you don’t have a history of eating disorders, do a high-intensity workout, wear something ridiculous in public, or show up to your next Zoom call with a stain on your shirt. Every time you do one of these little challenges, you move a little closer to freedom and willingness.

4. Embrace the notion, “Acceptance is the answer to all of my problems today.”

This phrase is a mainstay in the recovery community for a reason. Acceptance is a different side of the same coin of willingness. Acceptance is often the only sane choice we have in many situations. If my body and mind have been conditioned to want to shoplift every time I walk into a store, crave cocaine when I get stressed, or avoid confrontation when voices get raised, then that is what most likely will happen. If I attempt to resist that emotional pain, it will most likely persist. Thus, the only sane option is acceptance, and acceptance is not resignation, it is just mindfully allowing something that is already there.

5. Recognize you are always making a choice.

Each opportunity emotional discomfort arises, you are at a choice point. You can either scratch the itch and thus, increase its strength in the future, or you can choose to willingly have the discomfort and step toward what matters—or away from what doesn’t in the case of addiction.

It is easy to complicate willingness or acceptance because we can try to use them as another subtle way to control everything. But it’s an attitude—it’s not a feeling.

It’s not that you love the thoughts and the feelings you have, you simply stop expecting that they will or should go away and never come back. It also helps you realize that maybe, you don’t have to get rid of your painful thoughts and feelings to live a life worth living.

Can life start now, without needing to delete or change anything?

Can the focus be shifted to accepting challenging thoughts and feelings, while committing to what is meaningful and will actually bring contentment instead of just momentary relief?

More About How to Show Up for Life: 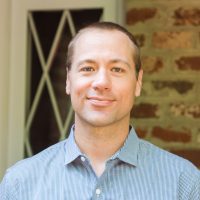 Parke Sterling is an anxiety therapist based in Richmond, Virginia, who works with stressed, anxious, and dissatisfied men and college-aged boys. He took a unique path to beco… Read full bio