On India & COVID-19: Living a Life Worthy of our Breath.

India has become the second country in the world after the United States to pass the 20 million coronavirus cases mark as the government announced 357,000 new infections and another 3,449 deaths over the past 24 hours https://t.co/crQSKW8zTW

“No women beating their breasts or tearing their clothes, no steady stream of visitors, no howling cries that ripple through the room, no booze, no funeral drums, no pall-bearers, no coffins, none of the hysteria we came to associate with death, none of the collective catharsis, none of the never-ending tears…Only the endless sight of anonymous corpses wrapped in white plastic streaming out from ambulances, rows and rows of open-air pyres with wood mercilessly piled close together to contain the flames, unrepentant fire and ash, cremation workers moving around in that smokey daze, recycling the wood that has not had the heart to burn.” ~ Meena Kandasamy

These words felt like a drum to my chest.

Seeing photographs of her funeral pyres burning without rest makes my stomach sink in sorrow.

It’s like watching the timbers of your home in flames and being too desperately far to help hose the fire.

On the 24th of April, over 100 pyres were burning in a crematorium in just one city.

Skies have turned blood orange above queues of corpses, and thousands of miles away, I can feel the heat of photographed flames and the captured stills of heartache.

I vividly remember the last steps of this life that I walked with my father—a stone crematorium in India, when he was in his final casket.

On the rare occasion I let my mind wander back there, I can still place myself into the room, into his hands, into the air.

The feeling of those final moments is etched into my bones.

The hysteria; the finality; the cries of relatives; the streams of tears; the resounding chants of prayer; the traditional preparations; the heightening and simultaneous blurring of all my senses; the gravity of my mother clinging to his casket before it faded into furnace flames, drenched in tears and dressed in white to mark the start of her journey as a widow.

Funerals and final goodbyes have a depth of intensity and emotion in India that you cannot describe in words or comprehend until you’ve experienced it.

But as painful as that parting was, my father’s death—that is to say, the final celebration of his life—received the dignity, space, honour, and grace that death deserves.

True healing comes from feeling the depths of our pain and eventually finding a space of safety and validity to release it.

And now, after months of seeing streams of nameless faces, unmarked bodies, unrecorded statistics, incomplete endings, I realise that the goodbye I once found so painful and punishing was in fact a privilege few have had, or will ever hope to have in these coming months.

When we spread my father’s ashes in the sacred Kaveri Sangam river, it finally felt like a moment of stillness in the chaos of my mind.

It brought some sense of peace to the pain, sense of clarity, of coming home, of circling back to birth—the closure of finality.

And that moment in time, when it felt like the world had stood still—that was my father’s time. And nothing and no one else’s.

But this virus has broken the stop clock.

It claims the names of the dead and reduces them to statistics—statistics only if they’re lucky—otherwise, merely the ash between recycled wood that has not had the heart to burn, before it is used on the next open pyre.

Train carriages have become medical wards and, with income inequalities and lack of security, the poorest are dying from hunger. People are buying black market medical drugs, and mothers who would give their last breath to allow their children to take one, can only plead for support for their babies to live.

The 200,000-plus death toll is likely far higher, as many are dying at home, on streets, in queues, and in ambulances. One NDTV investigation found in Delhi city alone, at least 1,158 deaths this week may have gone unrecorded.

As a British Indian, I feel helpless watching this fire of terror spread through the place where my family, my friends, and half my heart will always reside.

And as someone with a grandmother who has been on an oxygen machine for over a year, it pains me how much and how often I continue to take for granted the privilege of my own breath.

India is dying, but she is not receiving the dignity that death deserves.

So whilst thousands of lives have been reduced to the ash of recycled wood that has not had the heart to burn, let us love harder, feel deeper, and, at the very least, think about what it truly means to live a life worthy of our breath.

The coming years will continue to show us we must drastically shift our mindsets to a world view to have any chance of sustaining life on this planet. If countries stay silent in the face of adversity in others, our world stands no chance at healing collectively. It will stay broken in its individual parts, and those cracks will keep spreading.

Please join me in giving back to a country whose culture, resources, and divine ancient wisdom have been shared so freely with us for centuries and transformed the lives of so many—in giving someone on the other side of our shared planet a second fighting breath at life. 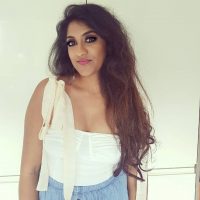 Meghana Hegdekar is a 24-year-old author who believes deeply in the healing and transformational power of storytelling. The 20s are profoundly formative, life-changing years, … Read full bio