A Lesson in Maitri from my Mango Tree. 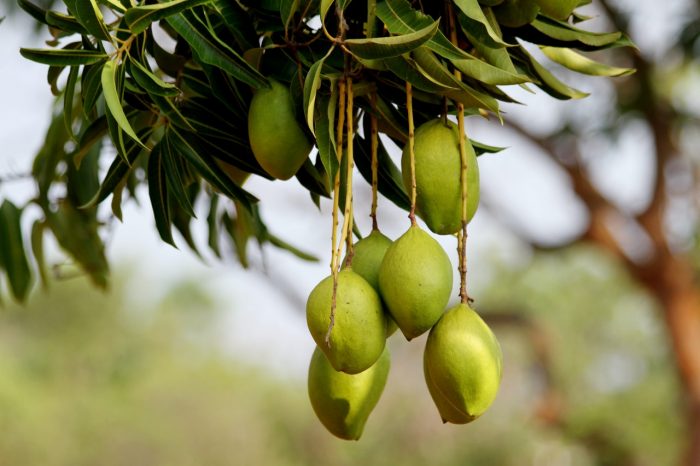 I inherited a mango tree when I moved to this new place in October 2020.

As narrow and dark as it was, it was exciting to have my own tree and a backyard in the middle of the city.

Cities are not sympathetic to trees. In India, we cut their far reaching branches to accommodate power lines. We imprison them in cement pavements. They often stand alone, like my mango tree, trapped between two buildings, in a narrow space with no grass growing around it.

I am certain all the neighbours cursed my tree for the mess it had caused—mosquitoes flourished where the leaves fell off.

Mangoes, however, are special—on two counts. The most obvious one is the taste. Second is the fact they are seasonal. Mangoes learned the art of staying pricey by being unavailable for most of the year. So all the nuisance the tree had caused was tolerated, I guess. Nobody complained to me.

I, the new occupant of the house, decided to do as right as possible by the tree. I hired someone to clean the leaves, allowing some breathing room around it. I kept the tree accessible, so it didn’t have a shady ground beneath for someone to lounge, but I paid visits. And as March came along, I eagerly started looking forward to the fruit season.

There was a catch, though: I had no idea what kind of fruits I was going to get. It was definitely not the prized Malgova or Bainganapalli or Mallika. It was some other variety, and no one around had any clue what it was. The fruit stayed green on the outside, even when ripe. And it got big—the size of Malgova. That was how much I could glean.

The mango season was slightly late this year. The blooms came late, and the ripening delayed further because of rain. I watched impatiently as tiny fruits emerged and fattened in size gradually over the weeks. With even the proverbial low-hanging fruits well out of my reach, my only clue to the full-term status of the mangoes were the ones that had fallen off the tree. The waiting game began: not big enough; not big enough; almost big; big enough but not ripe; and finally, ripe! The flesh shined with a bright yellow.

This week, when the gardener came, I declared firmly, “We have to pluck the mangoes today.” He tried the trick he has been trying for a few weeks now, “Shall we give it another week?” “No, we are doing this today.”

The buzz of flies and mosquitoes emerging from the orchard was adding to my impatience. “Okay, Madam, can you come to the terrace with me then? I need someone to catch the mangoes.” Huh? Is this how outsourcing works? Why should I do the work? I realised I had no other choice. I braced myself. I am not a city nut. But I did not exactly grow up around farms. So I really wasn’t sure how I would perform. Well, there is a first time for everything. Thus began the adventure.

The gardener cautiously climbed on the railing. And then his way up the branches, even the slim ones, which I wasn’t sure would hold his weight. His caution made me sweat. Mangoes or no mangoes, I wanted him to go back home that day in one piece.

In my Saturday workshop, we practiced Maitri, the unconditional and limitless friendship toward ourselves and fellow human beings through a simple exercise. We were split into groups of three, and in complete silence, we had to draw a picture together. The only way one could feel their way through this was tuning into the rest of the group. A stroke here, a circle there, a line here. We ploughed on until all three of us felt it was complete. It was amazing to see what took shape without a word spoken! We ended up with the image of a cloud bellowing out water, which then flew into a river with sparkling hearts on it.

As I positioned myself below the tree, that moment felt like another Maitri practice. I had to tune my arm movement in perfect sync with the falling mango. It is a good thing cricket is in my genes. Anyone who spent their childhood in India is bound to have played the game a few times in life. After the first few, I grew confident. The whole process from then on glided smoothly like a good catch practice.

Every night, some of the ripe, fat mangoes would fall with a heavy boom. The noise was so loud that I would always wake up with a shudder, alarmed that someone got hurt. I would then fall back asleep wondering how a 300-gram fruit could cause so much a hullabaloo.

As I caught the mangoes that afternoon, I understood how. My palms hurting from impact, and with the successful grin of having caught full toss after full toss, we walked into the house with at least 15 kilograms of mangoes.

I still have no clue what these are. What’s in a name, anyway? I don’t think the tree cares. It just stays bountiful, yielding so much and expecting only some tolerance in return. 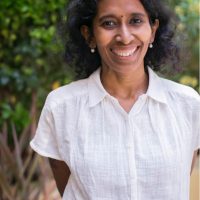 Maggie Inbamuthiah lives in Bangalore, India, and works on Diversity & Inclusion when she is not teaching Yoga or taking people out to connect with nature through Happifee… Read full bio